In this blog, Engender interviews publisher and writer, Laura Waddell about feminism and publishing. Here, Laura discusses the work of Tramp Press, sexism in publishing, why it's important to platform writers such as Mona Eltahawy that reject 'girl-boss feminism’ trends, and the gender, race, and class disparities in publishing and literary reviewing.

Laura Waddell is a writer of fiction and narrative non-fiction; UK Publishing Director of Tramp Press; and a critic, book reviewer and cultural commentator on television, print and radio. You can find a full bio on Laura's website here, and she tweets under @lauraewaddell. 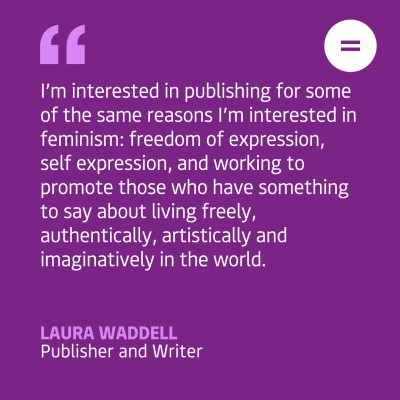 Tramp Press famously took a ‘sexists need not apply’ stand in refusing to consider any manuscripts addressed only to ‘Dear Sirs’ or listing only male influences – why is it important to you to challenge sexism as a publisher?

The statement Tramp’s co-founders Lisa Coen and Sarah Davis Goff made with that was a huge draw to me when I went to Tramp Press two years ago. I’ve worked for very big and very small publishing houses, and what I really wanted at that point was to work somewhere that aligned with my values.

There’s a straightforwardly practical purpose to the 'Dear Sirs' ban. Publishing is an industry where attention to detail is crucial and this rule cuts out a lot of time wasters. There’s a correlation between misogynist assumptions and uninspiring writing, and being observant is also crucial!

But also, a publishing contract is a business agreement, and who wants to work with someone who can’t imagine women in a position of authority? In the past, when I was younger, there were many times I had to grit my teeth, such as when aspiring writers would wrongly assume male colleagues were decision makers and ignore the women in a room. I enjoyed walking away from those situations. The three of us at Tramp Press are at a point in our careers where we are able to reject that behaviour and craft a feminist way of working which has served us well.

Ultimately, though, challenging sexism is deeply personally important to all of us, not just some corporate goal. It’s actually about our place in the world. I’m interested in publishing for some of the same reasons I’m interested in feminism: freedom of expression, self expression, and working to promote those who have something to say about living freely, authentically, artistically and imaginatively in the world.

‘Feminist’ books and publishing have seen a huge rise in popularity over the last few years following the Trump presidency and #MeToo movement, alongside a proliferation of ‘lean in’, girlboss-your-life type books aimed at a similar market. What stands out for you as some of the best recent feminist writing and how does it challenge that repackaging of the status quo?

Just last week we published Mona Eltahawy, who explicitly rejects corporate ‘girlboss’ trends. She says: “Feminism should terrify the patriarchy. We need fewer road maps towards a peace treaty with patriarchy and more manifestos on how to destroy it. The Seven Necessary Sins for Women and Girls is my manifesto.” She has the kind of boldness that lights a fire in others, a real fierceness, and draws on her international perspective from life in Egypt, experiencing the Arab Spring, and now living in North America.

One book I think a lot about is Zeba Talkhani’s My Past is a Foreign Country, a feminist memoir of growing up with the expectations on girls of Saudi Arabia, and later forging her own path into the world. It was a really fascinating, and also beautifully written, look at the dynamics of feminism and family, country, and selfhood.

UK publishing has an enduring reputation as quite a ‘male, pale and stale’ industry underpinned by unpaid internships and a London-based focus. The Rethinking ‘Diversity’ in Publishing Report highlighted how ‘Black, Asian and minority ethnic and working-class audiences are undervalued by bigger publishers, economically and culturally, impacting on the acquisition, promotion and selling of writers of colour’. What are your reflections on who publishing does and does not include?

In the last five years, publishing has really had to reckon with itself. Unpaid internships, which dissuade and exclude those from a low-income background, were commonplace when I started my career in publishing and are now greatly frowned upon. I think arts funding has also come a long way when it comes to expecting that everyone involved in a project gets paid adequately. Big companies also got a fright when everyone started talking about equal pay; although the industry is staffed largely by women, up until very recently men were still holding the lion’s share of senior and better paid positions. It’s important to recognise change, and keep pushing for it.

Gender, race, and other disparities in literary reviewing - who gets to review and whose book gets reviewed - has always been woeful. This is important because these things contribute to how writers build a career and reach readers, but also in the long term, which books become canon.

Race inequality in the publishing world is something writers such as Nikesh Shukla have really shone a light on, but as he has pointed out, the danger is all talk no action from the industry, and ‘diversity’ becoming a trend.

There are some great schemes which aim to overcome barriers to those entering the industry, but one of the most hopeful things to emerge are new networks providing crucial support and facilitating new opportunities, such as the Scottish BAME Writers Network. They’re absolutely smashing it. Everything they get involved with is brilliant.