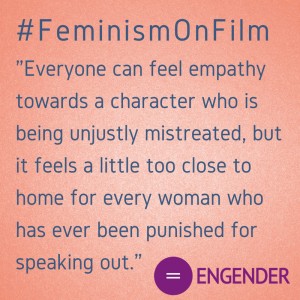 As Team Engender sat down to plan ways to mark our 25th Anniversary at the beginning of the year, we happened upon this very timely list of 25 feminist films due out in 2018.* With this list in mind, we issued a call-out to our members for reviews, reactions and thoughts on how women are represented in film this year.

Our first review is from Kay, a linguistics graduate of the University of Aberdeen and who is currently working as an English teacher in Tokyo. This review contains spoilers, so continue with caution if you haven't seen the film yet.

“RAPED WHILE DYING AND STILL NO ARRESTS? HOW COME, CHIEF WILLOUGHBY?” read the three billboards outside of the town of Ebbing. Three Billboards Outside Ebbing, Missouri, written and directed by Martin McDonagh is described as a comedy crime film.

Yes, there are, at times, extremely comedic elements, as well as the plot featuring a crime and the police, yet this description seems too inaccurate. Three Billboards is a film about motherhood and the profound, deeply harrowing responsibility one would feel if anything heinous ever happened to your own flesh and blood. Played by the awe-inspiringly badass Frances McDormand, the protagonist Mildred is grieving because her teenage daughter was raped and killed. This film could have been about a father whose daughter had died in such a way, but it was about a mother. To me, the film could not have been written any other way.

When I watched this film, it was immediately apparent to me how integral the issue of gender is to the plot. The other two major characters were both male police officers, Chief Willoughby and Dixon (played by Woody Harrelson and Sam Rockwell, respectively) who had been investigating Mildred’s daughter’s murder. The case had been open for a year and clues had dried up, much to the dismay of Mildred. Mildred’s reaction to this was triggered by the very real, desperate anger one would feel. She paid for three billboards to read an accusation that the police, in particular Willoughby, were incompetent, in order to shame them. Mildred had hoped that this would motivate them to catch the killer. The audience is also exposed to Willoughby’s point of view that only so much can be done for a case with no evidence. This imposes a moral dilemma on the audience, asking “who is right?”, as we are to feel sympathetic for Willoughby - he isn’t a bad guy, he’s done as much as he can do - but our allegiance is with Mildred, as she is the emotional anchor. In order to balance the scales, we find out Willoughby has cancer. He, too, has an emotional factor. Ultimately, the question is whether Mildred’s action is justified, when she knows about Willoughby’s illness and yet still chooses to pursue this slander.

Not only do the police react extremely negatively towards the billboards, but also the majority of the town. The police cause trouble for Mildred, peers of her son pick fights with him, and even her dentist attempts to treat a cavity of hers without any anaesthetic, in order to punish her. As the audience, we feel an immense amount of anger and frustration towards how she is being treated. Though I think the female audience, in particular, will be more aware of this than their male counterparts. Everyone can feel empathy towards a character who is being unjustly mistreated, but it feels a little too close to home for every woman who has ever been punished for speaking out. That the protagonist is a woman continues to be significant. We wonder whether things would have been different if the protagonist were male. 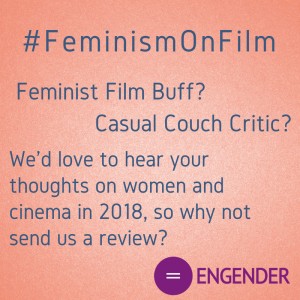 As much as Mildred is portrayed as such a marvelously real and fully fleshed out character, ultimately we are still seeing this situation played out from the point of view of a male writer. I cannot fault McDonagh’s portrayal of Mildred, but I believe it to be important to acknowledge the lack of a genuine female narrative of such an event, of such emotions and of such reactions. That being said, I cannot get over Frances McDormand’s extraordinary performance in this film. The honest and often brutal emotion that she delivers is breathtakingly pure. It’s still deeply imprinted on me, even after weeks.

My last thought on Three Billboards Outside Ebbing, Missouri is regarding where the progress of portraying ‘strong’ women lies in Hollywood. Despite Frances McDormand receiving critical acclaim from an array of sources, the audience, and award bodies alike, it still seems all too easy for some (including myself) to overlook the power of letting women take the lead in cinema. [1] This was demonstrated to me by two emotional plot points of the film. Firstly, there were so many heart wrenching scenes in this film, but the star of the most poignant one (personally!) was Harrelson’s character in which he is reading aloud his suicide note to his wife - he then shoots himself with a bag on his head. The suicide note brought me to tears, and not just a solitary tear but convulsive crying. It did an incredible job of displaying the tragic and beautiful facts of life.

Even though any time McDormand was on screen was remarkable, if I had to choose the most prominent scene, it would be the suicide note scene. This means, in theory, despite Mildred’s position as the emotional anchor of the film, the most powerful performance was not by McDormand (in theory!). Upon discussing the film with my boyfriend, I was shocked that to him the most notable performance was by Rockwell, in which his character underwent a transformation from a racist, ignorant asshole to a hero who (nearly) saved the day. This saddened me - not only because a male character had detracted from the strong female lead, but also because this “asshole turned likable hero” trope had detracted from a brilliantly original and three dimensional character.

While the film opens up so much discussion, especially the issues discussed above that arise from the protagonist being a strong female lead, I believe this film should be viewed in an extremely positive light. The criticism that has emerged (by myself and many others) is natural when we use cinema to examine where we are socially and politically. The criticism should also be seen as a by-product of progress. To me, it is genuinely promising when a piece such as this film is being acknowledged by so many. To me, it affirms that we are never standing still.

[1] As a side note relevant not to portrayals of leading women, but female characters and their interactions in film, I believe this film only passed the Bechdel test (when two female characters talk to each other about something other than a male character) once - when Mildred and her daughter are arguing over whether she can take Mildred’s car. Even at that, Mildred’s son is present and contributes slightly to the conversation.

All language used in guest blogs is the author's own. If you'd like to share your views on this film or others, find out more about submitting a review below.

Feminist film buff? Weekend cinema-goer? Casual couch critic? We’d love to hear your thoughts on the films in this list, or any film that you’d like to bring a feminist perspective to. Full details of how to submit a review are here.