Dr Finn Mackay is a sociology lecturer at the University of the West of England in Bristol and author of ‘Radical Feminism: Feminist Activism in Movement’. Here, ahead of the release of her new book 'Female masculinities & the gender wars’, Dr Mackay explores the term ‘gender ideology’ and what it means for feminism in the UK. 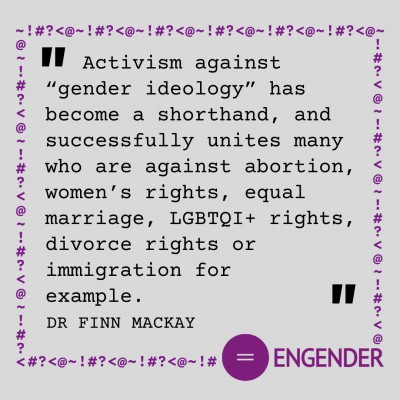 What is gender ideology?

The term “gender ideology” is not new (Graff & Korolczuk, 2018).This language began to be used by the Catholic church in the mid 1990s, for example in Beijing at the fourth World Conference for Women. Pope John Paul II wrote to the UN Secretary General, emphasising the natural complementarity of men and women, masculinity and femininity, and restating that the sexes are equal, but different. Catholic education guides warn against gender ideology, which they see as indoctrinating children into viewing sexuality, gender and sexed identities as fluid or influenced by personal choice. In the US, right-wing, Christian evangelical groups like the Family Research Council, label gender ideology as the third wave of attack against the heterosexual nuclear family; the first wave being the women’s liberation movement and the second being the gay liberation movement (O’Leary & Sprigg, 2015). The term is an evocative enemy, and platforms set up to oppose it can stand for traditional family values, separate sphere gender roles and nationalism. Activism against “gender ideology” has become a shorthand, and successfully unites many who are against abortion, women’s rights, equal marriage, LGBTQI+ rights, divorce rights or immigration for example.

Gender ideology is used as an excuse to block women's rights

Too often opposition to ‘gender ideology’ is used as an excuse to block movements for women’s rights and, in the case of the Istanbul Convention (IC), to avoid state obligations to reduce and respond practically to male violence against women. This Council of Europe Convention on preventing and combating violence against women and domestic violence would hold to account those governments who ratify. Groups lobbying in Turkey have argued that the IC erodes the nuclear family and promotes gay lifestyles. The government of Poland has also announced an intent to withdraw from the IC, arguing that by acknowledging the socially constructed elements of masculinity and femininity, the Convention goes against natural sex roles and promotes gay ideology. In July 2020, Marija Pejčinović Burić, the Council of Europe Secretary General reinforced that: “The Istanbul Convention is the Council of Europe‘s key international treaty to combat violence against women and domestic violence - and that is its sole objective” (2020). We need to recognise where homophobia and transphobia are doing some heavy lifting for a general reluctance to make the societal changes necessary to stop sexualised male violence against women. It is clear that too many states do not have some new problem with their invented folk devil of ‘gender ideology’ - they have a longstanding problem with women. It is also worth noting that the Westminster Government does not have an impeccable record here. The UK signed up in 2012 but has yet to ratify the Convention; perhaps because over ten years of ideological austerity have decimated refuge and rape crisis provisions as well as the capacities of the criminal (in)justice system to respond. 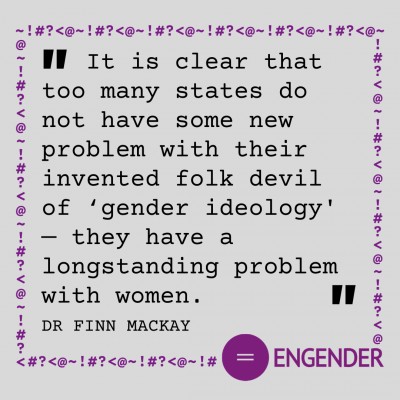 There is no “gender ideology” because there is no one LGBTQI+ ideology, lobby or agenda; just as there is no one feminist lobby, agenda or sinister conspiracy. Those against “gender ideology” like to suggest that sexuality and gender studies within academia are part of some plot to attack heterosexual families and force everyone to be gay or trans. In reality what activists are struggling for is the right to live as gay or trans at all. In particular, it is worth restating that trans men and trans women are not a conspiracy theory, but real people trying to thrive, while being marginalised and scapegoated at every turn. Women and minorities will not gain from increasing sex and gender conservatism; a fast train to Gilead is where that will get us. Such backwards travel is no destination that feminists should support. In the current state we are in we need to look upwards for our enemies, not sideways in horizontal hostility.