Jenny Lester is a feminist writer and performer. She currently works at Equate Scotland, and has previously worked in women’s rights organisations and mental health charities. She completed an MA in Women’s Studies researching sex education, pleasure, and faking orgasms. In this 'F-words' blog, she'll be discussing the terms ‘virginity’ and ‘foreplay’ and offering some suggestions for less patriarchal alternatives.

Content Note: this blog contains terminology around anatomy and sexual acts, and one instance of a censored swear-word. 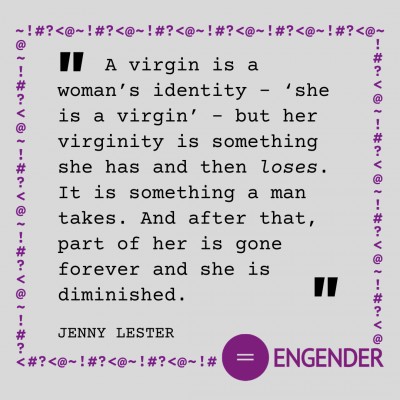 Outside of it being a strange concept in terms of possession, it is also heavily mired in patriarchy, with the term being of far more significance when applied to women.

Of course, some young men are teased if they still ‘have their virginity’, but this is nothing like the value judgements that are placed on women when it comes to sex.

This has always seemed strange to me, how can you lose something from a new experience? Surely, we should gain from it! The idea that a man ‘takes’ it from you also does not sit comfortably. It is part of patriarchal discourse around heterosexual sex that sex is always for the man, and he can somehow possess the woman through the act.

Moreover, in the commonly understood definition of virginity, the only way to ‘lose’ it is for a man to penetrate you with his penis. Because a man can fundamentally change who you are. This makes the term, not only extremely patriarchal, but exclusionary. Does this mean penetrative sex is the only ‘real’ sex? So if you never have penetrative sex but have a happy and healthy sex life, you are still a virgin?

I vote that we stop talking about virgins and virginity. As terms they are puritanical, they view sex as a destructive act, and an act that can only happen if penetration occurs. So what should we use instead?

Firstly, we should move to talk about a whole spectrum of sexual activities as ‘sex’. Forget penetrative sex being the only ‘real’ sex, reserved only for straight cis couples and embrace the chaos of the sexual world!

Secondly, we should move to be more descriptive. Drop the noun of ‘virgin’ and talk about sex acts as acts, not identities. For example, instead of ‘I am a virgin’, how about, ‘I haven’t had sex yet’.

Thirdly, let’s drop the possession of ‘virginity’, and talk about sex as we would of any other experience. Forget, ‘I'm going to lose my virginity’, and try, ‘I’m looking forward to trying it for the first time’, or for the more dramatic, try the flourishing - ‘I’m excited for my sexual debut!’.

Why should we do this? These terms better cover the sexual experience of different genders and sexualities, they are better for describing a range of activities, and they are not tied up in patriarchal notions of purity and possession! 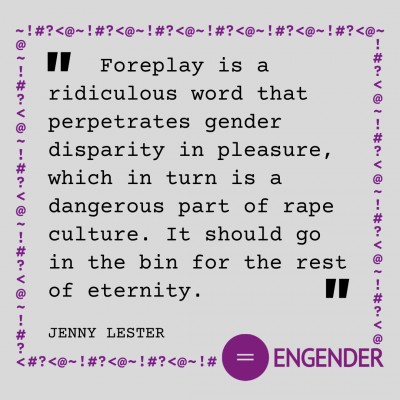 This has to be my least favourite word in our sexual lexicon.

Why do we understand sex in this way? Well, our sexual lives do not exist in a vacuum - they are shaped by the culture surrounding us. As we live in a patriarchy, it is not that surprising that it finds its way into our bedrooms (or showers, or dining tables) as well. And for a large chunk of the bias against anything other than penetrative sex, we have Freud to thank. His blatant phallocentric bias is perfectly demonstrated when reading his work on women’s orgasms.

Freud saw the clitoral orgasm as adolescent – it was how women climaxed as teenagers during masturbation. However when a woman begins having intercourse with men, the centre of their orgasms should be transferred to the vagina. This, he saw, was part of the natural progression through the stages of sexual development. Therefore a woman who cannot orgasm vaginally is, ‘frigid’ and is, “suffering from a failure to adjust mentally to her ‘natural’ role as a woman”. Therefore, the only ‘real’ sex is vaginal penetration. And anything other than penetrative sex is perverse, unless it is as a ‘warm up’ to the ‘real deal’.

This discourse, while entirely false, has a real impact on our sexual relatities. It is evident in our use of the word ‘foreplay’, the way sex is scripted in media, and the real, everyday acts of sex where women’s pleasure is overlooked, seen as an, ‘added extra’. When our sex lives are determined by linear ideas of ‘a little bit of foreplay before the real thing’ this creates a disparity in pleasure. By defining penetrative sex as the only ‘real’ sex, and everything else as simply a ‘prelude’ to this ‘main event’, the pleasure of men is centred and a disparity is created.

During heterosexual penis-vagina intercourse 90% of men orgasm, however 70% of women do not (Salisbury & Fisher, 2014). So if this is the only kind of sex we are having, then women will experience fewer orgasms. Indeed, anywhere from 25 to 74% of women admit to having faked an orgasm at some point in their lives.

Foreplay is a ridiculous word that perpetrates gender disparity in pleasure, which in turn is a dangerous part of rape culture. It should go in the bin for the rest of eternity. But what should we use instead?

Let’s just say what we mean! We can demystify the act of sex by talking about kissing, cuddling, licking, sucking, and all other kinds of f*cking. We can make sure we aren’t prescriptive with our sex lives and we can denounce the lineratity of foreplay -> penetrative sex -> finished. We can equally value giving and receiving pleasure in a myriad of ways for all genders and sexualities.

Why should we do this? It is more accurate and educational, it further removes penetrative sex from the pedestal of the only ‘real’ sex, and it is a step towards a more equal understanding of pleasure and a healthy consent culture.

Salisbury, C. M., & Fisher, W. A. (2014). "Did You Come?" A Qualitative Exploration of Gender Difference in Beliefs, Experiences, and Concerns Regarding Female Orgasm Occurence During Heterosexual Sexual Incounters. Journal of Sex Research, 51(6), 616 - 631.