F-words: The Many Languages of Transfeminism

Harry Josephine Giles is from Orkney and lives in Leith. Their latest book is The Games (Out-Spoken Press), shortlisted for the 2019 Saltire Prize for Best Collection. They have a PhD in Creative Writing from Stirling, co-direct the performance platform Anatomy, and are touring the poetry-music-video show Drone internationally. Here, they write about the history of 'transfeminism' as a word, and as a movement. Find out more about Harry Josephine at www.harryjosephine.com. 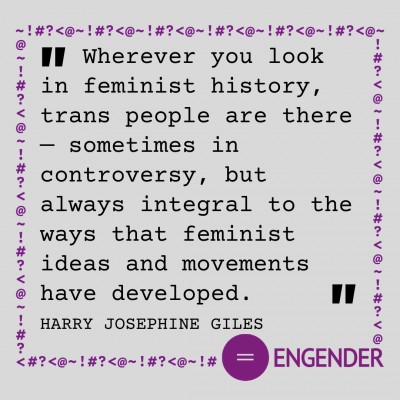 Like so many of the best things, there’s no definite answer as to when the term “transfeminism” was first coined, and it’s gone by many names before and since. After all, transness — the experience and politics of deviating from social gender norms — has long been part of feminism, since before either “trans” or “feminism” had a name. Emi Koyama’s Transfeminist Manifesto, which was published in 2001 and did much to popularise the term, argues that transfeminism’s primary principle is bodily autonomy, the idea that each of us has the right to make decisions regarding our own bodies, identities and expressions. Through this, Koyama says, “transfeminism embodies feminist coalition politics in which women from different backgrounds stand up for each other, because if we do not stand for each other, nobody will”.

At the time, Koyama was working with Diana Courvant at the Survivors Project in Portland, Oregon, a support project for trans and Intersex survivors of domestic and sexual violence. Both women were disabled trans survivors and brought these experiences of oppression to their work and politics. It was probably Courvant who coined the term “transfeminism” in the early 90s, doing this work, and she collaborated with Koyama to popularise it through their site transfeminism.org, a portal for thought and discussion. But there were many other visions of the same central ideas.

Leslie Feinberg is best known for Stone Butch Blues, a founding classic of lesbian and trans fiction, with a searing narrative that’s often passed from hand to hand with the words “you need to read this”. But ze also wrote extensively on trans politics, and hir 1996 book Trans Liberation outlined the shape of a movement, bringing together all kinds of gender outlaws — transsexuals, stone butches, street queens, leatherfolk, gender punks — under one feminist umbrella. Writing, for a moment, for readers who aren’t trans, Feinberg takes a similar approach to Koyama: “The defense of each individual's right to control their own body, and to explore the path of self-expression, enhances your own freedom to discover more about yourself and your potentialities. This movement will give you more room to breathe. [...] Together, I believe we can forge a coalition that will fight on behalf of your oppression as well as mine.” Along with others in the 90s, Feinberg helped to popularise this idea of a transgender umbrella, and of trans oppression as linked to many other oppressions.

The 90s were a fiery time for Anglophone trans politics. Patrick Califia’s Sex Changes, which documents the period and his own struggles to participate in feminism, has the (likely) first usage of the word “transfeminism” in a book. Around the same time as Feinberg was writing, TransSisters: The Journal of Transsexual Feminism documented political struggles in the US, and Radical Deviance was doing the same in the UK. Both periodicals published a mix of activist reportage, trans theory, women’s spirituality and personal writing, like many other feminist publications at the time. There were, of course, as in many feminist movements, fierce debates in the letter pages and dramatic and sometimes painful schisms. In both, the interviews are often the most eye-opening, with frank discussions with leading feminists about the issues of the time. 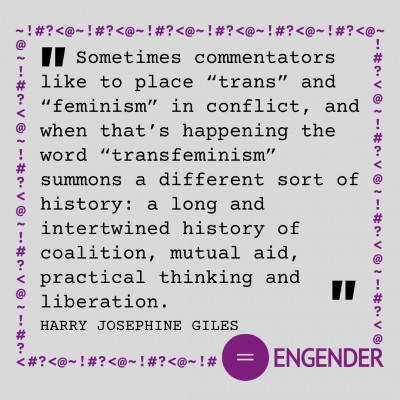 Earlier still, Sandy Stone’s Posttransexual Manifesto, first presented in 1988, sketched out similar ideas, arguing for freedom of trans identity and bodily autonomy from the coercive medical systems of the time. As with Feinberg’s work, and later Koyama’s, Stone identified the particular ways gender diversity was managed and oppressed by the same system’s of power as all women’s lives, and offered a trans-centred politics to fight for liberation. Using, as she says, “one of the arguments for solidarity which has been developed by gays, lesbians and people of color”, she calls for trans people to see their lives “as a political action begun by reappropriating difference and reclaiming the power of the refigured and reinscribed body. The disruptions of the old patterns of desire [...] produce not an irreducible alterity but a myriad of alterities”. That is, a transfeminist politics opens up many possibilities for everyone else as well.

Stone also takes us back to an earlier feminist period, the 1970s, when she was a sound engineer for the radical lesbian feminist music label Olivia Records. Around the same time, folk singer Beth Elliott was helping to organise the first West Coast Lesbian Feminist conference in San Francisco, Suzan Cooke was a staff photographer at Lesbian Tide, and in London Roz Kaveney and Rachel Pollack were organising the Gay Liberation Front’s “Transvestite, Transsexual and Drag Queen Group” (there’s a whole other blog to be written on trans terminology’s changes over time). Both also accomplished novelists, Kaveney went on to be a deputy chair of Liberty (among much else), and Pollack to be a world expert on tarot, whose work has been foundational to many women’s spirituality. Wherever you look in feminist history, trans people are there — sometimes in controversy, but always integral to the ways that feminist ideas and movements have developed.

Although my focus here is on Anglophone transfeminism, it is of course not just an English language movement. Transfeminismos in Spain, Transfeminismo in Brazil and Toransujendā feminizumu in Japan are a few of the book-length approaches. Trans/Feminisms (TSQ 3.1-2) drew much more Anglophone attention to these and other international currents. These different perspectives draw out different aspects of transfeminism, but there are common core interests in trans survivor and anti-violence work and in improving conditions for trans sex workers. Transfeminism is always centred on trans people’s — and in particular trans women’s — extreme experience of marginality.

Koyama herself has revised and expanded work on the Transfeminist Manifesto since it was first published, in response to criticism and her own changing ideas. And transfeminism as a movement has continued to change and grow from these many roots. Published in Edinburgh in 2017, the Radical Transfeminism Zine is one key rewriting of transfeminism’s power, again mixing forms: manifestos, personal reflections, posters from reproductive struggles, letters and theoretical analyses. Nat Raha’s introduction, like Koyama, centres bodily autonomy, and also calls for “a politicised analysis of our lives and experiences – getting to the root of them; and developing a life praxis that works towards social transformation, often on a small scale, with an ethos of mutual aid and solidarity with coalitional struggles”. The “radical” here is directed towards total social transformation, but also towards always centring solidarity with the poor, racialised, queer, migrant, disabled and incarcerated.

Sometimes commentators like to place “trans” and “feminism” in conflict, and when that’s happening the word “transfeminism” summons a different sort of history: a long and intertwined history of coalition, mutual aid, practical thinking and liberation. Whether the idea goes by “posttransexuality”, “radical deviance”, “trans liberation” or “transfeminism”, the core remains the same. Like all feminist histories, transfeminism has gone by many names in the past, and shifting languages will create new futures too. “Transfeminism” names not just a feminism that includes trans people, but a feminism in which trans people have always been present, comfortable with asking what special knowledge trans people bring, asking what our unique perspectives have to offer, alongside many other perspectives. Transfeminism brings the walls of gender down, with a world to make together.