F-words: Language and gender in board games

Jenny Lester is a feminist writer and performer. She currently works at Equate Scotland, and has previously worked in women’s rights organisations and mental health charities. She completed an MA in Women’s Studies researching sex education, pleasure, and faking orgasms. She is a board game and TTRPG enthusiast and is passionate about bringing feminism into these spaces. 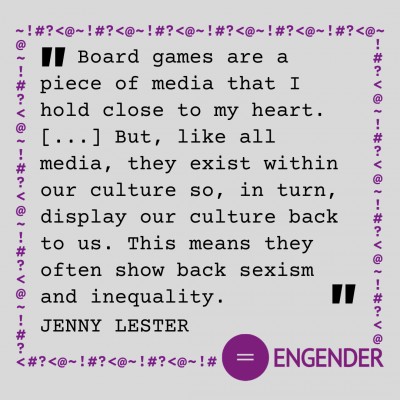 Board games are a piece of media that I hold close to my heart. I love playing them, reading about them, and buying them. But, like all media, they exist within our culture so, in turn, display our culture back to us. This means they often show back sexism and inequality. One of the ways we can see the patriarchy within this space is by looking at the language used in the rule books of the games we are playing. For the F-word's blog series, I set out to investigate the language in the rule books of all 25 board games that I own.

I had originally planned to do this experiment whilst visiting a board game cafe to graze upon their vast menu of games. However, like lots of things over the last 4 months, my plans had to change. Luckily enough, between myself and my partner, we own 25 board games which I thought was plenty to get on with.

Of course, this means that the data set is somewhat skewed. We only own fun games so many popular games are missing such as Monopoly, Cluedo, and the Game of Life. Moreover, we are both feminists so we also don’t have obviously sexist games like Battle of the Sexes or Men Are From Mars, Women Are From Venus The Game. And the games we have are not always the latest edition (see Scrabble set from 1955 below).

So I cracked open the 25 boxes and read each rule book asking the questions:

What gender are the rules written in?

If there are playable characters, what is the gender split?

You can download my full dataset here if you are interested in which games did what well.

Gender of the rules

The gender the rules are written for speak volumes about who the designers think will be playing their game. Often it is a very clear signal of exclusion.

Indeed, 5 of the 25 games sampled have rules that use ‘he/him’ throughout. E.g. 'on the player’s turn he should roll the dice'. So if it is my turn but I am not a ‘he’ should I just not roll the dice?

But this does not include anyone using other pronouns.

I was happy to find, however, that the remaining 16 games used ‘you’ and ‘the player’. E.g. 'on your turn, you should roll the dice' or 'the player should then roll the dice'. This is clearly the best option to include everyone who could enjoy the game.

It was interesting, but not surprising, to note that none of the games opted to use only ‘she/her’. E.g. 'on her turn, she should create a woman-centred game'.

Gender of the characters 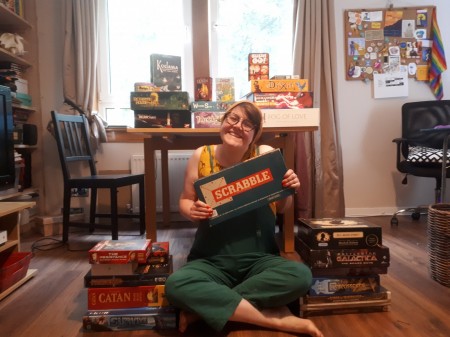 Being able to select a character that represents you is a luxury not extended to most women in many areas of gaming. Sadly board games seem to be no exception.

In 12 of the 25 games, there are characters that players use to play the game.

Of these 12 games, only 4 have an equal 50/50 split of men and women characters that players can choose from.

Only 3 have character cards that leave the gender of the character up to the player, either by not using gendered pronouns or having ambiguous artwork.

In the remaining 5 games, there are more men than women characters.

In 2 of these, there are only men characters - Takenoko, where the panda, emperor and gardeners are all men and 221b Baker Street where every player is Sherlock Holmes (or Watson if you lose!).

In going through all of the rule books Pandemic was a clear stand out for good practice.

The gender of characters has no impact on play. Women characters are represented as experts equal to men. The designs of the women characters are not sexualised or infantilised. The gender of the characters seems to be even - with the pictures showing 3 men, 3 women, and 1 androgynous-looking person. The rules are written in the second person, thereby not excluding people who do not use she/her or he/him pronouns. And when giving an example of play, the player is not given a man’s name, instead, the rules describe a player named ‘Anna’.

I was surprised to find that the worst game doesn’t use he/him in the rules. Although Lords of Waterdeep successfully sidesteps that particular error, this is about all it manages.

In the rules, it uses she/her and he/him, but no other pronouns are offered.

All of the characters are referred to as the ‘Lords’ of Waterdeep - no feminine or non-binary option is given.

There are 11 characters players can choose from, but only a paltry 4 are women. And of these women, one can select between being a widow of a powerful man, a crafty courtesan, a master manipulator, and a woman known as ‘kitten’. The artwork of 3 of the women characters is quite normal, but ‘kitten’ is stylised to be ‘sexy’ where none of the men are.

Furthermore, throughout the rulebook, we are greeted with sexualised pictures of women wearing very few clothes even when in a combat situation - think chainmail bikini.

It is fantastic to see that the vast majority of games at least do not only use he/him pronouns and have some options to play as women, but this is still a disappointing state of affairs.

Like in most areas of our media, there is still lots of work to do before the language in our games is equal.

So, if you find yourself in the enviable position of creating board games, remember it is not just men who play. Women and non-binary people can and will read your rule books and have to select from the characters you create. Write in the second person, use a mix of genders when creating fictional players, and offer lots of options for playable characters that are non-stereotypical, dressed appropriately, and with cool powers that aren’t gendered.

And if you find yourself playing a board game with gendered rules or characters, then point it out to the people you are playing with. Recognise it is silly and annoying. Why not subvert it in your gameplay? Change the gender of the characters - be a widower, a courtesan, or a man named ‘kitten’.