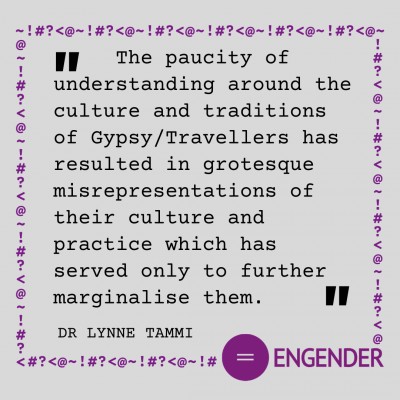 Dr Lynne Tammi has worked in the field of Community Development for over three decades. Currently she is the Interim National Co-ordinator for Article 12 in Scotland - a young people-focused human rights and equalities NGO - and a freelance Human Rights Consultant and Advocate. She is of Irish and French Traveller heritage, and writes for us here about the links between language and discrimination.

In considering the language used to categorise and indeed denigrate Gypsy/Traveller women, an examination of the role of the media in the ‘othering’ or cultural denigration and exclusion of the Gypsy/Traveller community en masse is crucial.

Creators of ‘folk devils’ and drivers of moral panics who with “a lexicon of verbal abuse [keep up] a constant level of bigotry” (Cohen, 2002), these virtuosos of meaning-making construct ‘conceptual maps’ - a system, if you like, to code (or de-code) the signs and symbols of who or what are to be assigned the status of 'outsider' - and present them to us as both truth and threat. Consider the following Mail Online (2011) reportage on what was to become the forced eviction of the largest Gypsy/Traveller site in Europe, at the time:

"Meanwhile, the Dale Farm divas were enjoying their 15 minutes of fame as they strode into the High Court for the latest episode in the legal fight to stop travellers being evicted from the site. The power-dressing girls were in London, showing their support in the fight to allow travellers to stay at the camp in Basildon, Essex. […] After Mr Justice Edwards-Stuart praised their 'lovely turnout' and said they 'brightened up the court' last week, they were back today to show off a wider variety of styles. Indeed, they were so dressed to impress that there was speculation they could be hoping to star in an offshoot of the reality show My Big Fat Gypsy Wedding […]" (Martin, 2011).

Here we witness the women ridiculed and denigrated by references to gender and ability with cultural labels erroneously assigned to them via reference to My Big Fat Gypsy Wedding and similar media articles and productions. Their ability to ‘behave appropriately’ is challenged through a negative narrative portraying them as “divas seeking 15 minutes of fame” and with a member of the judiciary commenting on their “lovely turnout” and stating that they “brightened up the court”, their presence is reduced to mere entertainment: as if they were the court minstrels of the day rather than women fighting for their homes and their families’ right to live according to their culture and traditions - intersectional denigration, par excellence.

Almost a decade on, little has changed in the way the Gypsy/Traveller community, the women in particular, is portrayed by sections of the mainstream media, with the poverty porn [1] machine, churning out programmes such as The Gypsies Next Door and The Truth about Traveller Crime, continuing to construct and embed negative social representations of the community thereby building a majority consensus, or worldview, that Gypsy/Travellers are somehow less deserving, or indeed unworthy, of a share of ever-decreasing resources experienced in times of real or constructed crises. A consensus that has been acutely evident during the COVID-19 pandemic by way of media responses to families with pregnant women and young children living roadside being provided with emergency fundamental services such as water, sanitation and waste bins:

“One astonished resident said: “We have asked the council on Tuesday and Wednesday to get them moved, to be told they are staying put because of the coronavirus […] It is not fair to the people who live around here and pay their Council Tax” (Houston, 2020).

Here we see the community’s practices categorised and criminalised - a-social or anti-social - a lawless group inconsiderate of and hostile to the values and norms of the majority (they don’t pay council tax, get them moved), a social representation of the Gypsy/Traveller as non-citizen, as outlaw, as undeserving of the ‘access all services’ rights that the ‘moral majority’ may take as given – thus effectively legitimising the enforced distancing, displacement and segregation of the community as an outsider group.

Unfamiliarity breeds fear and contempt, and perpetuates myths and stereotypes. The paucity of understanding around the culture and traditions of Gypsy/Travellers has resulted in grotesque misrepresentations of their culture and practice which has served only to further marginalise them. Without doubt, the UK media’s ‘doxosophy’ has played a key role in constructing these misrepresentations and, to some extent, has contributed to the situating of Gypsy/Travellers on the peripheries of society.

Whilst a better understanding of the culture and traditions of Gypsy/Travellers will not present us with that eureka moment wherein prejudice and discrimination towards its members will disappear, Houdini-like, into the ether, it would be a worthy starting point in the deconstruction [2] of the pernicious social representations currently assigned to the community and serve as a shot across the bows to those doxosophers amongst us who would seek to divide society.

To conclude; I wrote this blog against the backdrop of Gypsy, Roma and Traveller History Month. Each June I imagine that the awareness raising and celebrations of the centuries old contribution that Gyspy/Travellers have made to Scottish society [3] will change mindsets and challenge the pervasive negative social representations of Scotland’s Travelling people; the Irish and Scottish Summer Walkers who gathered the tatties and the fruit and made a major contribution to the building of the roads, tunnels and hydro dams of Scotland. It’s 2020, we are in the midst of a pandemic where governments would have us believe that differences and prejudice have been set aside and replaced with a sense of unity, a sense of us ‘all being in this together’ - it doesn’t feel that way to me and I doubt it feels that way to those Gypsy/Traveller families living roadside, either.

[2] In considering deconstruction I am minded of Derrida’s (1976) concept of trace. According to Derrida: “[…] experience as the experience of the present is never a simple experience of something present over and against me, right before my eyes as in an intuition; there is always another agency there. Repeatability contains what has passed away and is no longer present and what is about to come and is not yet present. The present therefore is always complicated by non-presence” – this is the trace: markers of past experience and practice; of prejudice and preconception. Essentially deconstruction can be defined as an exploration of the (past, present and indeed future) prejudices and preconceptions that lie below the surface of what we generally accept without question and as Derrida would have it “Deconstruction is […] on the side of truth. Deconstruction is justice”.

[3] The late Hamish Henderson described the community as the keepers of the songs and stories of Scotland and spent decades gathering their stories and songs for his archives which were to become the School of Scottish Studies.