F-words: Gendered language - the Maker movement and its technology narrative

Dr Elisabeth Loose has just finished her PhD thesis on the amateur technology Maker movement, its gender balance and connection to environmental sustainability at the University of Glasgow’s School of Interdisciplinary Studies. She has recently become self-employed to support charities and social causes with their communications. Follow Elli on Instagram at @elli.ellixir where she advocates for inclusive social impact marketing. 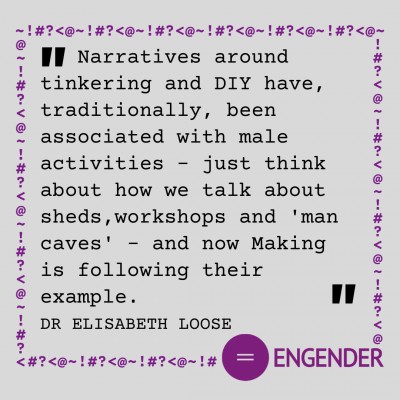 Over the past decade a movement known as the Maker movement, or Maker culture, has developed all over the world, whereby hobbyist and amateurs passionately engage in tinkering, creating new technology or simply repairing broken items themselves. Whereas this is nothing new, the movement puts special emphasis on and has been accelerated by digital technology, including microcontrollers and 3D-printers.

In my PhD, I have examined gender balances within the movement’s Makerspaces (communal spaces in which people share tools such as 3D printers, laser cutters, and other equipment for Making) in the UK, Germany and Austria and how it affects women. It might come as no surprise that an activity so heavily shaped by digital technology is vastly dominated by men (many spaces I have come across only have around 10-20% female membership). When interviewing female Makers, they spoke about practices that were not inclusive for all genders and sexist to an extent that explicitly feminist Makerspaces that often offer membership to anyone but cis men have started to appear in the last few years. One of those practices raised was one of gendered language and narrative.

Two of my interviewees talked passionately about language and narrative within Making and the effects it has on communities’ gender balance. Robin*, for example, has worked for a Makerspace and stated that technology-driven spaces can become very “geeky” and “jargon-led” and create a competitive environment in terms of who knows most and best, which they attributed to a more male-dominated community. In order to combat this, instead of “being technology-driven, we were design-driven. The idea being that it was not about the specific technology that you were interested in, but it was more about what you were trying to make and finding the best way of making it.”

Rose, another Maker working for a Makerspace, echoed this sentiment: "I always find that advertising something with tech, the uptake with guys is just straight away [...] The language that we use is very, very important. Get the language right and we get the diversity that we're looking for. [...] There's a gender thing there." She goes one step further and says that addressing Making activities through a lens of real-world problem solving, e.g. tackling environmental issues, in contrast to tinkering and tech-driven language, has actively helped to address the gender imbalance. This is, in fact, the focus of my PhD: a potential connection between gender and environmentally sustainable practices within the movement. Within the scope of my research, I have found a slight tendency for women to consider environmental impacts more in their practice than men. Specific reasons for this are difficult to pinpoint but it seems safe to say that socialisation and stereotypes contribute to this phenomenon.

In contrast, many men appear to choose a different approach when talking about gender and Making. A few years ago, for example, a discussion around gender balance erupted on a global Makerspace discussion list which led to one participant stating that if a community has only “one female and she wants more females […] then she should start a campaign to find more females. It could be that she host a class about e-textiles or whatever it is females like to talk about” (Powell, 2013). This exclamation outraged many at the time and contributed to the motivation to set up feminist Makerspaces (Liz Henry). I experienced this bias first-hand when one of my research participants framed Making activities in the following way: “You as a woman have children and I as a man have making”. These are no isolated incidents. The dismissal of gender issues as something that needs urgent attention is something I have noted in many of my interviews as well as in other academic studies.

This construction of men being technologically talented and women less so is not new and can be observed in many domains, not least in the tech sector itself where only 5% of leadership positions are held by women. Lots of research has been conducted in this area, for example by Cynthia Cockburn (1983, p.203) who concludes that men have been constructed “as strong, manually able and technologically endowed, and women as physically and technically incompetent”.

This hegemonic form of masculinity as strongly associated with technical prowess and power has required women who want to enter technical domains “to sacrifice major aspects of their feminine identity” (Wajcman, 2010, p.145). This, in fact, showed in my research in which around half of my female interview participants described themselves as tomboys, square pegs or “a guy with tits” and cited that as one of the reasons they fit into their Making community.

Realising the implicit gender-nuances in our language, specifically in individual concepts, such as technology, but also in broader narratives and how we communicate something can be crucial in how something is perceived and who dares to participate and get involved. Narratives around tinkering and DIY have, traditionally, been associated with male activities – just think about how we talk about sheds, workshops and ‘man caves’ - and now Making is following their example.

Making itself is a great pastime that challenges the way objects are produced and consumed in our society. Constructing it as a male activity, with women better off in the domestic sphere, is not only unacceptable in the 21st century, but also quite simply dangerous. It excludes half the population from making the world a better place, and perpetuates gendered stereotypes that become accepted truth to some. Changing and challenging our narratives is a first step in the right direction.

*All names have been changed.

Henry, L., 2014. The Rise of Feminist Hackerspaces and How to Make Your Own. Model View Culture. [online] Available at: https://modelviewculture.com/pieces/the-rise-of-feminist-hackerspaces-and-how-to-make-your-own [Accessed 01 September 2020].