F-words: Emojis can be feminist too

Amy King is a PhD researcher at Edinburgh Napier University and Digital Officer at YWCA Scotland - The Young Women’s Movement. Her PhD investigation into online violence and the mechanisms of harm in language often take her research to weird and wonderful places, including contemplating the harm - and hope - of the humble emoji. 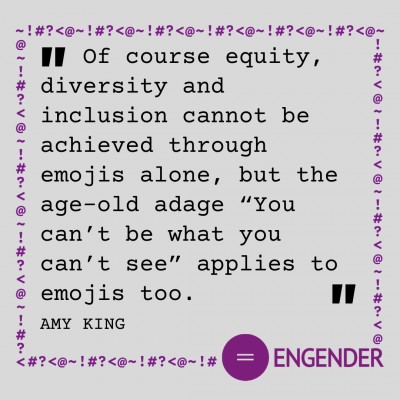 Do you remember the first time you used an emoji? I have to admit, I don’t. But I do remember the first time my Mum sent me one, about 7 years after they had become a mainstream element in digital communication. Now I’m priming her for the GIF library on WhatsApp. I’m lucky, though - my Mum has never sent me the wrong emoji before, like a crying laughing emoji in a sombre context, or an awkward emoji shoehorned into a sentence to prove she’s ~down with the kids~. And that’s important because emojis carry specific meaning, have acceptable and unacceptable uses, and they often hold crucial extralinguistic detail that we rely on to ensure we’re understood properly.

Like all language evolution, the forces of change in emoji meaning and usage are largely the users and their societal contexts. Emoji users collectively shape the meanings we attach to them and this is culturally primed and specific. Aubergines (🍆), peaches (🍑) and water/sweat droplets (💦) have become synonymous with sexual activity - apparently thanks to horny teenagers not wanting to be caught by their parents. The upside-down smiley face (🙃) doesn’t mean you’re happy, rather it conveys sarcasm or is used in contexts of self-deprecation. There’s a difference in relativity between the smiling face with heart-eyes (😍) and the smiling face with hearts (🥰): in one the feeling of love is projected outward, in the other it’s internal. The number of emojis we use implies emphasis, much like adverbs in oral or written language (‘I want it’ vs. ‘I really, really want it’). We have largely applied language rules to emojis in our general use and it feels weird when we see them used outside of the contexts we’re familiar with.

In part, I think that’s why we haven’t used them to replace words (unless we’re being euphemistic or there’s some secondary implied meaning attached which is known to everyone in the conversation). For example, compare these sentences:

We won’t ordinarily replace pizza with 🍕, but we will add it to the end as an emphasis - trying to entice our pals to cave and get pizza with us instead of eating the leftovers waiting in the fridge. The grammar and syntax of emojis is pretty extraordinary and gets linguists like me very excited because they tell us all sorts of things about how we subconsciously categorise different elements of language and how we construct the language rules we struggle to offer a better explanation for than “It just works that way”.

One of the biggest pitfalls of digital communication is the depersonalisation that occurs on a screen. It’s easy for sarcasm to be misconstrued, or an errant full stop to convince you that you’ve upset the sender in some way. Communicating context is hard - emojis offer one method of adding further context, not least because they contribute emotion and facial expression to text in lieu of a speaker’s facial expression, body language and/or tone of voice. It’s pretty amazing to reflect on the way we’ve adapted our digital communication to work for us and the steps we take to avoid misunderstanding. It’s no wonder Emojipedia recorded over 5 billion emojis being sent a day on Messenger around the world in 2018; that number is surely even greater now. For such small icons, they hold a lot of communicative weight.

Emojis can get pretty political. Interestingly, in 2019 there was a trend of using the famed peach emoji, most commonly known for signifying buttocks, was used to allude to impeachment. This came after Time magazine’s use of a peach to represent impeachment on its cover, and what followed was a recontextualisation of the peach emoji as a political statement supporting the impeachment of US President Donald Trump. Of course, the backside meaning remained prominent, potentially leading to some confusion for American emoji users in certain situations. However, it’s a very interesting manifestation of emoji use as a political statement.

Emojis can be feminist, too. Campaigns for equal representation in emojis led to the addition of unicode-ified women as scientists, firefighters and other pixelated gender roles undoing the patriarchal ideas of what spaces women take up in society. 2016 brought us women as athletes and construction workers, and is symbolic of the ongoing fight to place women alongside men in industries and activities that are unnecessarily gendered. That these emojis didn’t appear until so recently is frustrating and indicative of an enduring patriarchal and heteronormative status quo among decision makers in all areas of society, but the change is positive and ongoing, with representation of marginalised groups appearing to be more of a priority on emoji designers’ lists. Of course equity, diversity and inclusion cannot be achieved through emojis alone, but the age-old adage “You can’t be what you can’t see” applies to emojis too. In a world so driven by what is visual and easily categorised, we must strive to provide a plethora of options for everyone to identify with and relate to - and this includes digital representations of ourselves where language is not always enough, or the right medium, to capture an entire mood in a few pixels. 💁‍♀️

In 2017, a Plan International UK survey revealed the enduring stigma surrounding menstruation and menstrual health, and the long-lasting impact this stigma had on society. Accessible, honest conversations were rare between friends or family members, according to survey respondents - Plan International UK decided this needed to change. Seeing the importance of digital communication to current generations, they noticed a lack of representation for menstruators through emojis and began their #PeriodEmoji campaign calling for period emojis to be entered into the Unicode library. Unfortunately, their 5 designs - including period pants - were rejected. However, undeterred, Plan International UK joined forces with NHS Blood and Transplant to campaign for an emojified representation of blood. This bid was, thankfully, successful and now we can digitally tell the world when our new cycles are beginning. We can joke, despair, ask for sympathy, communicate without words, even, to those around us that we’re menstruating at the tap of a screen. 🩸

This campaign was about more than a small red droplet on a phone screen - it was about showing the world that menstruation is a natural bodily process which we all need to accept without stigma and judgement. This emoji sparked a huge conversation, online and off, about the impact of representing menstrual experiences and the power of proper menstrual education for improving the lives of those who menstruate, and the empathy and understanding of those who don’t. Such an impact is far from a drop in the bloody ocean.

Representation is absolutely important - even in the world of emojis. The Pride flag - 🏳️‍🌈 -, for example, only entered Emojipedia in 2016. Couples representing women who love women and men who love men have been around for several years too. This year, the trans pride flag emoji was introduced to the Unicode update. Digital visibility and acceptance of the LGBTQ+ community in this way has big implications for the wider fight for the community’s collective rights. It also offers those within the LGBTQ+ community to more accurately represent themselves in digital spaces, which is incredibly important. However, the current offerings are far from expansive and many people are still not represented by Unicode’s offerings. One designer went ahead and created their own more inclusive set of representative LGBTQ+ Pride emojis, proving that digital diversity can still be improved upon in the emoji-sphere.

Amid the Black Lives Matter revolution, Emojipedia published a #BlackLivesMatter emoji list including black and brown hearts (🖤,🤎), raised fists in Medium (✊🏽), Medium-Dark (✊🏾) and Dark (✊🏿) skin tones and a megaphone (📣). This recognition imbued new meaning on the digital icons - representation, resistance and revolution in unicode form. It’s a powerful thing to recognise; visual elements to activism live long in our memories. Symbols of activism are largely born of visual representations - the raised fist is an icon of Black Lives Matter is iconic and representative of the movement at large and this translates seamlessly to digital contexts with the correlating emojis.

My PhD research focuses on online communication - specifically violence in communication via social media - and as part of that, I’ve had to consider the potential violent qualities of emojis. You might be aware that the gun emoji no longer exists in your emoji keyboard - a squirt gun took its place in 2016 on Apple products and was soon followed by most other platforms. It sounds a little bizarre at first, but when you consider the global context of gun violence, especially in the USA, it’s important to consider the social impact of removing guns from emoji libraries. 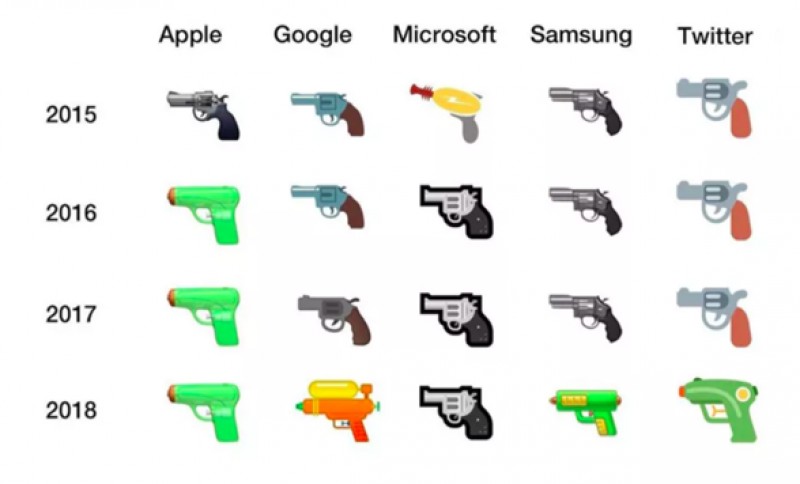 Similarly, it’s important that we consider the potential harm emojis can carry. If they can change the contexts of messages and hold implied or secondary meaning, surely they can also be used to incite harm. And they do. While it’s relatively uncommon from what I’ve seen so far, it’s not impossible for emojis to be used to incite violence or harm in response to tweets, for example. Crying laughing emojis - 😂 - (known on Emojipedia as Face with Tears of Joy) used in response to survivors’ accounts of abuse to denote denial or lack of sympathy, shushing emojis - 🤫 - symbolically silencing users speaking out against injustice, and more graphic instances of emojis in conjunction with text have been used on Twitter to antagonise other users around sensitive topics.

The social impact of these supposedly insignificant icons that were woefully hated on as ruining the ways our younger generations would learn to communicate? It turns out they have the power to pack a real punch. 👊