F-words: Beyond a buzzword

This F-words blog from Talat Yaqoob shares why intersectionality must be much more than just a word. Talat is a freelance consultant specialising in gender equality, intersectionality, education and workplace equality, and political participation. Follow her on Twitter @TalatYaqoob. 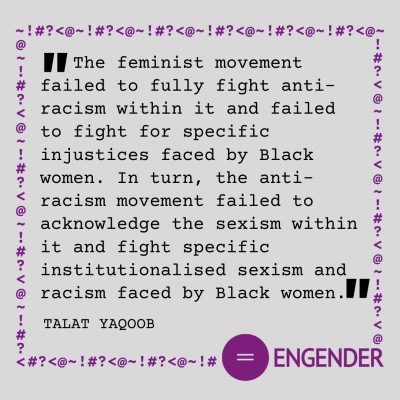 Across policy making, activist movements and the third sector the term “intersectionality” is becoming better known, or at the very least being heard more. However, the term is not new.

Intersectionality provides a lens with which to see the overlapping multiple discriminations faced by many women. Since its origins it is now also used as a term to understand overlapping inequalities faced by disabled women, LBT women, carers and working-class women. The point is to capture (and most importantly, tackle) the specific inequalities faced by experiencing multiple, overlapping discriminations. For example, a Muslim woman who experiences street harassment which is specific to her wearing a hijab is experiencing sexism and Islamophobia which a non-Muslim woman would not face and a Muslim man would not face. This simultaneous Islamophobia and sexism experienced is specific for Muslim women and therefore needs to be captured and then tackled through an intersectional lens.

For many women, including me, reading about intersectional feminism and intersectional policymaking was the first time we felt seen as our full selves. Our multiple layers and complex lived experience were being described, and for once, prioritised.

Whilst we now have the term to use (and it is certainly being used more across Scotland’s policymaking and third sector in particular), it is not necessarily resulting in a change in how we operate or delivering the actions we need. A perfect example of this can be seen in our response to Covid-19. We know women are more likely to be at risk given they are disproportionately more likely to be in frontline roles, we know that Black, Asian and Minority Ethnic communities are more at risk given twice as many deaths across the UK have been registered due to Covid-19 in these communities. Yet, in Scotland, we are not collecting data related to ethnicity and Covid-19, we do not know the extent of the specific risks for BME women in Scotland and we are not responding or strategising our recovery with the full information needed to know how we respond for those furthest away from opportunity and power.

The most common discussion around intersectionality is about data. Whether it is the gender pay gap, women’s health outcomes or violence against women, when we investigate and analyse the landscape with a presumption that women are a homogeneous group we will only exacerbate the inequalities faced by so many women. The reality for women will be lost in the numbers and, therefore, our response will not be fit for purpose. Here is a stark example for you:

Before leaving my position as Director of Equate Scotland I was proud to launch the first report which analysed the experiences of women working in and studying science, technology, engineering and mathematics through an intersectional lens. The report revealed the realities of the experiences faced by women who experience multiple and compounding inequalities and whose experiences are lost in one dimensional data analysis. 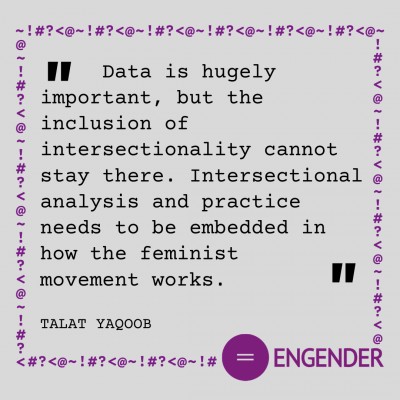 The research asked women whether they felt confident in coming forward to report issues of discrimination they faced in employment or education. Overall 1 in 3 women did not feel confident reporting discrimination, but when analysed through an intersectional lens this jumps up to 50% for BME women, LBT women and disabled women. The compounding inequalities faced by BME, LBT and disabled women and the distrust caused by institutionalised inequalities becomes visible only when we purposefully make them visible in what and how we analyse the cultures we create, the policy influencing we do and the services for women we deliver.

By delivering through a truly intersectional lens, the feminist movement in Scotland can better ensure that the voices and needs of women who are too often ignored are given the platform they deserve. However, to do justice to this, we can’t simply be a small group acting as a vehicle for these voices and needs to be heard, we need the Scottish feminist movement to be big, dynamic, and inclusive to women from across Scotland and from across all backgrounds. By doing so, we create a better Scotland for all women, not just some.

Intersectionality is not a buzzword, it’s not simply something to be said to sound inclusive, it is analysis to be followed, a method of working to engage in to create policy that works for all women, activism that fights for all women and data that tells the stories of all women.