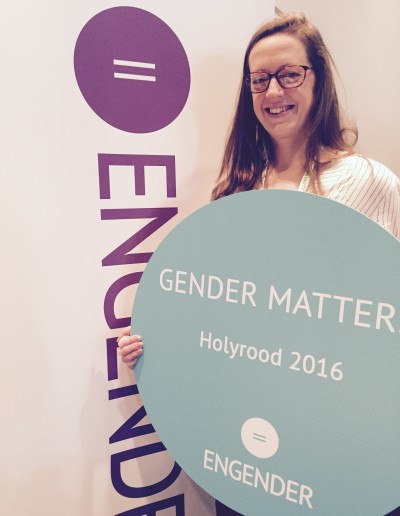 With Scotland going to the polls on Thursday, it is an exciting week for the political nerds amongst us. At Engender HQ we will be eagerly number crunching the proportion of women returned as MSPs and mapping the outcome in terms of pre-election commitments to women’s equality.

Of course, now that all political parties have released their manifestos, we already know what is on the table. Last week we published this detailed gender summary of promises from the main political parties, in relation to our own Gender Matters manifesto and other directly relevant issues for women.

On the whole we are pleased to see a range of gender equality issues addressed by the majority of parties. Unsurprisingly, some of our calls remain missing, especially where these are radical or structural in nature, but there are a number of notable highlights.

We called for a Gender Equality Bill to drive gender issues up the political agenda and create accountability in areas where the pace of change has been incredibly slow. Scottish Labour, the Scottish Greens and the Women’s Equality Party have all committed to publishing such a Bill over the course of the next parliament, with RISE including an Anti-Sexism Bill as one of its big ticket policy items.

With relevant powers reserved to Westminster, political parties themselves are currently ‘gatekeepers’ to equal representation in Scottish politics. It’s therefore very heartening that the SNP, Labour and Greens have used their manifestos to formally back the Women 50:50 campaign. The campaign (and Engender’s manifesto) calls for measures to ensure that women are 50% of candidates in national and local elections, and 50% of public board members. Power to set gender quotas for public boards is coming to Holyrood, and both the SNP and Greens have committed to legislation that would set these at 50%.

None of the parties pledged to develop a gendered economic strategy or wellbeing and equality index. However, Scottish Labour did propose a statutory requirement for gender budgeting across all policy areas, as part of the Gender Equality Bill, and Scottish Greens pledged to improve the quality of gender budget analysis. For such a non-manifesto-friendly topic, this is pretty good going.

We have been calling for parties’ to move towards a universal, flexible, free childcare system for many years. This set of manifestos doesn’t move us much further along that road, although the Lib Dems will push to extend pre-existing SNP proposals to all two years olds, and the Women’s Equality Party would row back to 15 hours a week topped up with fees of £1 per hour capped at 10% of income. It is also good to see proposals around various aspects of childcare provision, including 600 early learning and childcare centres and 20,000 more qualified staff from the SNP. Full details are in our master manifesto table.

Encouragingly, ‘carers’ rights’ is one of the most populated sections of our summary. Scottish Labour have committed to make social care free at the point of delivery - an enormous issue for carers and those they care for – and to create a Carers’ Commissioner. The SNP have promised to review social care funding and structures, and the Greens to create an independent social care tribunal, both of which were amongst our Gender Matters manifesto calls. The Conservatives want to explore integrating disability benefits with health and social care, a move strongly opposed by disability and carers organisations.

Our manifesto calls on parties to use new powers over social security to advance women’s equality. Fuller details can be found in this briefing paper and this joint lobbying paper on Universal Credit payments. The response on this is a bit of a mixed bag. We are sorely disappointed that only the Greens have committed to splitting joint awards of Universal Credit between couples. More positively, it is a great start to see all five main parties back an increase in Carers’ Allowance to at least the same level as JSA, and proposals for a 50% rise and £200 per week from the Scottish Greens and RISE respectively. Scottish Labour would double Sure Start Maternity Grants for first children, and the SNP would raise it by £100, reinstate the £300 grant for further children and introduce £250 payments at the start of nursery and primary school. Both the SNP and Lib Dems would provide a Finnish style ‘baby box’ of essential items for all new-born children.

Our VAW asks came from our sisters at Scottish Women’s Aid and Rape Crisis Scotland. These relate to women’s access to justice and safe housing, and a long-term funding plan for VAW services. These have been covered in part by the SNP, Labour and the Greens – details are available in the matrix. More broadly, SNP, Labour and Lib Dems all committed to a new domestic abuse offence, and the SNP to a domestic abuse aggravator. Under their Anti-Sexism Bill, RISE would legislate to protect funding, introduce a strategy for sexual harassment and make misogyny a hate crime

We had not anticipated that abortion would feature in many, if any of the parties’ manifestos, given that it generally commandeers a free vote in parliament. It’s really positive, therefore, that plans for abortion feature in six of the eight manifestos that we reviewed. The SNP, Labour and Lib Dems state that they have no plans to change the law, with the Greens pushing for decriminalisation. Greens and Labour also focus on access to current services.

And finally, for years Engender has been shouting from the rooftops about the UN Convention on Women’s Rights (CEDAW) and calling for its incorporation into Scots law. Happily, Labour and the Scottish Green Party have included such a pledge in their manifestos.

So, plenty for feminists to be cracking on with, regardless of who ends up in the driving seat when parliament reconvenes! Here’s hoping for a record number of women MSPs at Holyrood come May 12th.