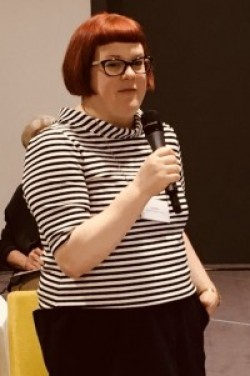 Earlier this summer our Executive Director Emma Ritch attended the General Assembly of the European Women's Lobby in Brussels. Here she writes on the role and structure of the Lobby, and how Engender works with our sisters in Europe.

In June, I spent most of a week at the European Women's Lobby general assembly in Brussels, where I was elected to its board of administration.

The Lobby is the largest European umbrella of women's organisations, and its general assembly is an annual gathering of all of the national co-ordinations. Engender represents Scotland within the Lobby.

Some of you who follow European feminism or institutional feminist politics will have seen the Lobby pop up on Twitter, in our Friday Feminist Five mailers, but their work is much less familiar to other feminists in Scotland.

I thought I'd share five things about the Lobby (and Engender's involvement with it) that might be of interest.

1. What the Lobby's role is

The European Women's Lobby is a feminist policy and advocacy organisation that has two main roles. First, it lobbies European institutions, including the Commission and Parliament. Second, it supports feminist organisations in member states to participate in Europe-wide campaigning and lobbying.

2. How the Lobby is structured

The Lobby accepts one national co-ordination for each European member state, and leaves it up to the feminists in that state to create or select an organisation to be that national co-ordination. The UK's constitutional arrangements have posed a bit of a challenge to us in this regard, and I'll explain how we resolved it in just a moment. One of my key priorities for action is around how we can stay a part of the Lobby post-Brexit. Gratifyingly, sister organisations from across Europe are willing to engage in the technical process of revisiting the Lobby's statutes to see if they can keep us!

The Lobby is democratic, with members voting at the general assembly for the EWL's board, and executive committee. All national co-ordinations are represented on the board, which meets physically twice a year, and works virtually in between those meetings. The executive committee meets more regularly to meet the exacting requirements of Belgian corporate governance. One of the struggles that the Lobby is currently engaging with is how to make its work more intersectional and its representative structures more representative of Black and minority ethnic women and disabled women.

There is a secretariat, which is based in Brussels.The current secretary general of the EWL is Joanna Maycock.

3. How the UK is represented

The UK can only have one national co-ordination, because it (rather than Scotland, Wales, N. Ireland, and England) is the European member state.

As there is no pan-UK feminist organisation working across the four nations of the UK, a synthetic organisation, called the UK Joint Committee on Women, was created.

Engender is the Scottish member of UKJCW. Wales is represented by WEN Wales; N. Ireland by the Northern Ireland Women's European Platform; and England by NAWO.

We have a rotation of roles within UKJCW, so that all organisations have fair access to the roles of EWL board member, EWL board alternate, convener of UKJCW, and secretariat of UKJCW.

Following the general assembly, I am now the EWL board member. Alys Mumford, Engender's comms and engagement manager, also attends UKJCW meetings on behalf of Engender.

4. How we participate in the Lobby

We are involved in policy work, particularly around the economy and violence against women. I am a member of the Lobby's feminist economics working group, and also do other bits of work throughout the year to influence the European Semester (economic policymaking) process and other pieces of ad hoc policy. Other working groups on the go just now are focusing on political representation (Catherine Fookes from WEN Wales sits on that) and sexual and reproductive health and rights (we're repped by Emma Johnstone from NIWEP).

The Lobby uses information about women's equality across European member states in its lobbying. This involves quite a lot of administration and compilation on our part, to feed in on Scottish experiences. Recent data gathering projects have covered topics like sex and relationships education, the implementation of the Istanbul Convention, and women's access to pensions. We draw on the expertise of sister organisations here in Scotland to make sure that we're painting an accurate picture of life for women in Scotland.

We also respond to the Lobby's campaigning calls by writing letters and emails to MEPs, and Scottish Government and UK Government ministers.

Finally, we also share what we do and know with feminist organisations across Europe.

All of the work we do with the Lobby gives us a richer sense of what is happening to women across the EU, and allows us to join with other feminists to make our voices louder.

We can't spend our Scottish Government grant on international travel. We pay for our annual participation in the general assembly by using income from consultancy work that Engender carries out to raise funds.

All other travel expenses to speak at events, or take part in meetings, are paid for by Europe.

Creating time to ensure that UKJCW works effective and fairly can be challenging, but we mostly manage by working and meeting online. We're going to be hosting the annual physical meeting of UKJCW next January in Scotland.

If you'd like to keep up to date with Engender's work with the EWL, and receive updates on our other areas of work as well as events and opportunities of interest to feminists in Scotland, you can sign up to become a member of Engender and receive our weekly Friday Feminist Five emails here.