Today, along with organisations working for equality for women, disabled people, black, minority ethnic people and the LGBT community in Scotland, we're delighted to announce a joint project aimed at increasing diversity within Scottish politics. With funding from the Scottish Government, organisations Engender, Inclusion Scotland, BEMIS, the Council for Ethnic Minority Voluntary Organisations (CEMVO), Stonewall Scotland, the Equality Network and the Women 5050 campaign will work to enable political parties to remove the barriers that stop underrepresented groups from taking part in politics as party members, activists, party staffers, and as elected representatives. 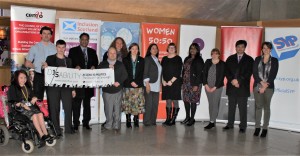 The organisations will produce an evidence-based online tool that will allow those involved in political parties, from national executives to local branches, to audit their practices and get help on how to remove barriers to getting involved.

“We know that when there is greater diversity in our democratic spaces, better decisions are made. Political parties know they must do more to challenge the over-representation of white, non-disabled men in politics, and this project aims to help them take real action to improve the extent to which political parties and our elected representatives look like the population of Scotland.

‘Women’s representation remains woefully low in local councils; only 29% of our local councillors in Scotland are women. This means women’s voices are missing from the debating chambers of local councils, when they make decisions on issues of direct relevance, from our schools to licensing decisions, and from museums to violence against women services.

“We’re delighted to be working with colleagues across the equalities sector on this project, which will ensure that Scotland’s elected representatives truly reflect the diversity of Scotland’s population”

“We want our democratically-elected institutions to be much more representative of the communities they serve and Scottish society as a whole. With the creation of the toolkit, political parties will be supported in removing the barriers people face taking part in politics and increasing diversity.

“We will know we are living in a fairer Scotland when we see our elected representatives at all levels of government truly represent the make- up of Scotland’s society.”

The project aims to build on successful initiatives including the Access to Elected Office Fund which was created last year and is also funded by the Scottish Government, and administered by Inclusion Scotland. The fund offers financial support for disabled candidates to reduce or eliminate disadvantage during the selection process and election campaign due to impairment-related difficulties or exclusion.

This year 39 candidates were recipients of the fund (plus five others who were not successful in seeking selection as candidates), covering seven political parties plus independents. Fifteen of the recipients went on to succeed in the elections.

“The Access Fund has proven a big success, enabling many candidates to compete on a much more level playing field than has ever been possible before. We are seeing people who would never have previously considered candidacy before claiming their democratic right to seek elected office. We look forward to working with parties and political organisations to build on this excellent start.”

The online tool will be available to political parties and community groups in the autumn, and the project is currently seeking branches of political parties to pilot the tool.
If you’re a member of a political party and are interested in finding out more, please contact us.
Posted on May 23 2017 at 13:15