Today we've released our report making the case for gender quotas in Scottish Politics. We are calling for the Scottish Government to push for the devolution of electoral and equalities law to the Scottish Parliament, and for political parties to make equal representation a priority. 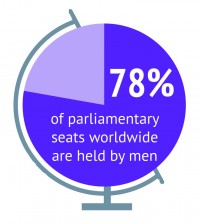 Quotas are a mechanism to ensure that Scotland’s political system includes equal numbers of men and women, and counter-act the over-representation of men which currently exists. Globally, 78% of parliamentary seats are held by men and, while Scotland has a gender balanced cabinet for the first time, we still don't have equal representation for women across Scottish politics. Only 24% local councillors are women in Scotland, and only four out of Scotland’s 1223 councillors are women from a minority ethnic background.

As well as making the case for gender quotas in Scotland, the report charts the success of political parties in fielding women candidates for the Holyrood election. Of Scotland’s five major parties, only Scottish Labour have so far managed to achieve 50% representation of women in both their constituency and list candidates.

The report makes a number of recommendations both to the Scottish Government and to Scotland’s political parties. While the power for legislating electoral quotas has not been devolved to the Scottish Parliament, the power to set gender quotas for public boards will be devolved this year. Political parties can take action for equal representation through adopting formal gender quotas, starting with the local council elections in 2017. 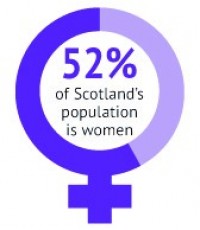 “Women make up 52% of the Scottish population, and should be equally represented in our democratic bodies. Having elected officials who truly reflect the diversity of Scotland means improved democracy, increased engagement in public life, and enriched policy decisions which bring benefits to all.

Lessons from elected bodies around the world show that, without legal quotas, even in countries which are hailed as equality-champions women’s representation settles at around 35-40%. Quotas are a recognised method to increase women’s representation and challenge sexist assumptions around gender and politics."

“We welcome Engender’s report into the need for quotas in Scotland's democracy. The report rightly highlights that without quotas we are unlikely to see true parity in Scotland's parliament and local councils. We must overcome the myth that we currently operate in a meritocracy, with that logic we are essentially saying that men are somehow more gifted than women at being leaders. Such thinking is simply derogatory to women. Quotas promote diverse women with the talents and ambitions to be leaders, and create a level playing field where leadership really can be based on merit."