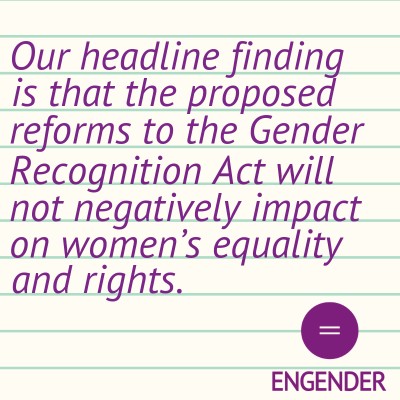 This week, Engender has responded to the Scottish Government’s consultation on the draft Gender Recognition Reform (Scotland) Bill. Although the actual consultation is very short, comprising just 5 questions focusing on technical details of the Bill, we took the opportunity to set out some of our broader thoughts about the Gender Recognition Act.

Our headline finding is that the proposed reforms to the Gender Recognition Act will not negatively impact on women’s equality and rights.

Because we recognise that some elements of the public discussion around reform have been polarised and rife with inaccuracies, we were keen to use our consultation response to set out the work Engender has been doing to inform our position on this.

Our response also analyses the way in which the proposed Gender Recognition Act reform will interact with women’s equality and rights including the Equality Act 2010, and the UN Convention on the Elimination of all forms of Discrimination Against Women (CEDAW).

Our headline finding in our consultation response is that reform will not have any adverse effect on the capacity of the Equality Act 2010 and CEDAW to protect women from discrimination and advance women’s equality and rights.

We are pleased to be able to share, alongside the consultation response, a paper we commissioned from Professor Nicole Busby, Professor of Equality, Human Rights and Justice at the University of Glasgow. This longer paper sets out in detail the protections against discrimination on the basis of sex and gender reassignment in the Equality Act 2010, and how that interacts with questions around sex and gender. We summarise some of the points from Professor Busby’s analysis in our consultation response.

Engender has consistently expressed the view that the current process for acquiring a GRC is overly complex, expensive and burdensome for the applicant, and often based on stereotypical views about men's and women's interests, roles, and behaviours. We support the principles of reform, and particularly the positive impact that this will have on trans women’s mental health.

You can read our answers to the specific questions in our consultation response here: Engender's response to the Scottish Government Consultation on the Gender Recognition Reform (Scotland) Bill

Read Professor Busby's paper here: On the Basis of Sex: Protection from discrimination on the grounds of sex and gender reassignment in the Equality Act 2010