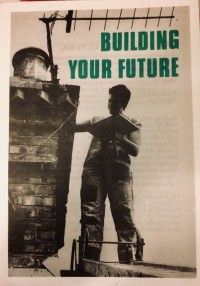 In Karen's second blog, she muses on the challenges of making real change, and why equality still seems so far off.

Planet 50-50 by 2030: Step It Up for Gender Equality, the UN’s sustainable development agenda, asks governments to make national commitments to address the challenges that are holding women and girls back from reaching their full potential, with the focus on creating an equal planet in 12 years’ time. Doesn’t this beg the questions: why 2030 and not now? And, also, is it even possible? Doesn’t it suggest that it is not a lack of awareness that is preventing girls from achieving equality, but a patriarchal power dynamic which is intent on keeping them in their place?

I recently visited Engender’s office in Edinburgh to see what treasures their archives held and in one of the boxes, I came across an ordinary pink folder which had seen better days (not unlike myself!). Inside were several pamphlets and newspaper articles about women and manual trades, all from the 1980's. This made we wonder how far we have come since then – 30 years down the line.

The leaflet Building Your Future introduces a video intended for girls aged 14-16, designed to give them information about getting apprenticeships in the building industry and ‘to stimulate discussion about the forces that keep women out of this type of work.’ Formed in 1975, Women in Manual Trades (WAMT) was responsible for producing the video and, on their 40th anniversary in 2015, launched a new campaign to make ‘women on the tools the norm, not the exception.’ So why, after more than 40 years, are women and girls still being excluded? Why is the struggle for equality still very much alive? 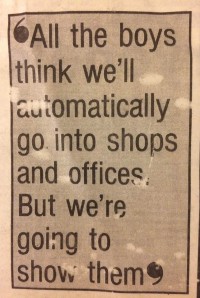 The inspiring feminist politician and activist Marilyn Waring said, “If you are not visible as a producer in an economy, you will be invisible when it comes to the distribution of benefit,” and this is where women face challenges because they continue to carry out the majority of unpaid labour in the world today. Time is something we all have, which it is possible to exchange for a salary, but since women most often take on the roles of cooks, cleaners and carers, their time is given up for free and they are described as unemployed. This is not what women want, nor what they deserve.

In accordance with the Planet 50-50 Agenda, the Scottish Government are tackling the underrepresentation of girls in science, technology, engineering and mathematics through their STEM strategy, introduced this year. They report that the number of passes in STEM subjects by girls rose between 2007 and 2016:

The government are committed to addressing the continued underrepresentation of women and girls by investing £1.5 million over the next three academic years, via the Scottish Funding Council, in a programme of equality projects across Scottish colleges and universities, as well as publishing a Gender Action Plan which will analyse statistics on gender weighting in STEM subjects within education and develop strategies to tackle the imbalance.

While it is undeniably positive that the Scottish Government is making these commitments, do they recognise how much gender stereotyping continues to influence girls’ and boys’ decision making? Dominant ideologies are hard to break and institutions where girls are encouraged to aspire to marriage and motherhood, taking on invisible and undervalued work, can limit them tremendously. Education is key to mobilising change but raising children within restrictive binary gender roles does not enable them to reach their full potential.

Girls have the ability to do just as well as boys; often better, as school results show, and yet they continue to be underrepresented and underpaid once they leave school. Organisations such as Engender have a huge part to play in fighting for equality and it is great that the Scottish government is taking steps to improve our kids’ prospects. However, something else needs to change and I think this lies in the beliefs and values of society as a whole. By raising boys and girls as equal from the start - allowing all children to wear every colour of the rainbow; to be princesses and cheeky monkeys; to play with all sorts of toys - only then can we hope to nurture a new generation of individuals who are truly equal.