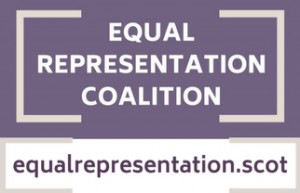 We’re really excited to have launched our Equal Representation in Political Parties online tool and app, which we hope will help increase representation of women in political parties in Scotland.

Engender is a proud member of the Equal Representation Coalition, who developed the online tool with funding from the Scottish Government. Alongside national equalities organisations Inclusion Scotland, BEMIS, the Council for Ethnic Minority Voluntary Organisations (CEMVO), Stonewall Scotland, the Equality Network and the Women5050 campaign, we have a vision for a Scotland where our elected representatives truly represent the Scottish population – improving democracy, increasing engagement in public life, enriching policy decisions, and therefore bringing benefits to all.

The Equal Representation in Political Parties self-assessment tool, which can be accessed online or via a dedicated app, allows any member of a political party to measure how well their party is doing in a range of areas, and will then produce an equality improvement plan for the party. Examining all areas of party life from culture of meetings through to selection processes and manifesto writing, the tool recognises that improving representation has to happen at all levels of politics, not just elected office.

“We know that when there is greater diversity in our democratic spaces, better decisions are made. Political parties know they must do more to challenge the over-representation of white, non-disabled men in politics, and this project aims to help them take real action to improve the extent to which political parties and our elected representatives look like the population of Scotland.

‘Women’s representation remains woefully low at all levels of political office in Scotland; only 29% of our local councillors in Scotland are women, and numbers of women MSPs are remaining static at 35%. This means women’s voices are missing from the debating chambers of our councils and parliament, and therefore the decisions around all aspects of women's lives.

“We’re delighted to be working with colleagues across the equalities sector as part of the Equal Representation Coalition, which will ensure that Scotland’s elected representatives truly reflect the diversity of Scotland’s population.”

“The Access Fund has proven a big success, enabling many candidates to compete on a much more level playing field than has ever been possible before. We are seeing people who would never have previously considered candidacy before claiming their democratic right to seek elected office. We look forward to working with parties and political organisations to build on this excellent start.”