Engender joined other equalities organisations calling for equal representation for women, LGBTI, BME and disabled people yesterday to meet with representatives from Scotland’s political parties to discuss measures to improve diversity in politics.

In a meeting hosted by Marco Biagi MSP, Minister for Local Government and Community Empowerment, we presented a vision for a Scotland where elected representatives truly reflect the diversity of the Scottish population – improving democracy, increasing engagement in public life, enriching policy decisions, and therefore bringing benefits to all. 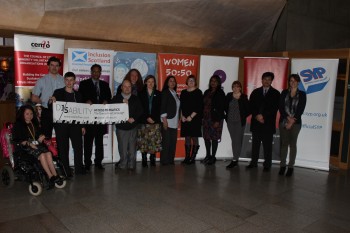 MSPs and officers from the SNP, Scottish Labour, the Scottish Greens, the Scottish Liberal Democrats and the Scottish Conservative Party were in attendance to discuss how they can work to make their parties more inclusive at all levels. Equalities organisations are calling on parties to commit to a number of measures, including auditing the diversity of their members and setting quotas or other targets to improve representation.

“The Scottish Government is committed to doing all we can to ensure that our elected representatives truly reflect the rich diversity of the Scottish population. We have already taken action to level the playing field for disabled candidates by investing £200,000 in the Democratic Participation Fund for Disabled People, and changing the definition on personal expenses so that disability-related costs do not count towards their election expense limits. We will also be publishing our Race Equality Framework shortly which sets out what we will do to help minority ethnic communities have equal chances to participate at all levels of political, community and public life. We also want to achieve a gender balance for our elected representatives, and are leading by example with one of the few gender balanced Cabinets in the developed world. That is why we support the Women 50:50 campaign, which is working to achieve at least 50% representation of women in our Parliament, in our councils and on public boards.”

‘We are delighted to be coming together with equalities organisations and political parties to discuss the vital issue of equal representation. The underrepresentation of women in politics is an issue which has gained attention over the years, but we still have a huge representation gap for women in Scotland. Of our 1223 local councillors for example, only 22% are women, for example, and only four of these women are from minority ethnic backgrounds. It’s essential that political parties take concrete measures to improve the diversity of their members, candidates and elected officials, in order that Scotland’s politicians truly reflect our citizens.’

Jamie Szymkowiak, Founder of One in Five said:

‘Recent campaigning victories from One in Five means aspiring disabled politicians have access to non-financial and financial support through Inclusion Scotland – but now it’s time for Scotland’s political parties to do their bit. The upcoming election presents an opportunity for disabled politicians of the future to enhance their skills. We’re urging political parties to look at internal candidate selection processes and to encourage as many disabled people as possible to stand as candidates in the 2017 local government elections’.

‘Scotland is becoming increasingly diverse in its population, with 4% visible and a further 3% non- visible ethnic minority population. However, this increasing ethnic population is far from represented at elected office. CEMVO is therefore engaging in this event as it is high time that all the major political parties address this ethnic minority under-representation to ensure the interests and voices of ethnic communities in Scotland are fully represented. CEMVO would be delighted to work with all the political parties to explore ways to address this under-representation.’

- Organisations and groups who have signed up to the vision and asks are:

- Additional information on Access to Politics and the Democratic Participation Fund for Disabled People via Inclusion Scotland: http://inclusionscotland.org/information/employability-and-civic-participation/access-to-politics/democratic-participation-fund-for-disabled-people/

- The vision and asks of the organisations are:

We have a vision for Scotland where our elected representatives truly reflect the diversity of the Scottish population – improving democracy, increasing engagement in public life, enriching policy decisions, and therefore bringing benefits to all.

1. Commit to the vision for meaningful representation as set out by equalities organisations.

2. Audit the diversity of party members, activists, staff, candidates and elected representatives at all levels, creating a benchmark against which to monitor change.

3. Set targets, and/or quotas where applicable, where there is under-representation, taking account of intersectionality and individuals’ multiple identities, and implement actions to meet any targets set.

4. Audit and address barriers to participation in all party activities, including but not limited to, standing in elections.

5. Commit to support and work with organisations and campaigns working to increase the participation of under-represented groups.