Celebrating the history of the women's movement in Scotland 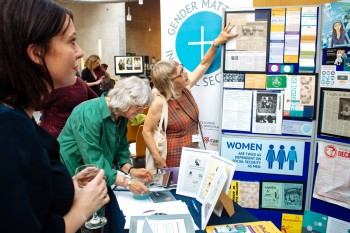 In the late 80s and early 90s, women in Scotland came together to create an organisation which would advocate for women's equality through research and campaigning. Today, 25 years on from its official registration as a charity, Engender is excited to launch a project exploring the history of this movement.

With funding from the Heritage Lottery Fund, Engender will create a documentary podcast featuring interviews, exploration of document archives, and discussion about the changing face of feminism in Scotland. The project also includes a visual element, and today Engender is delighted to announce that they will be working with Glasgow-basd photographer Beth Chalmers to create a series of portraits celebrating the work of the women's movement over the past quarter of a century.

Speaking ahead of the project, Beth said:

"I am so delighted to be working with Engender to create a series of portraits of woman who have paved the way for a more equal society.

I consider it a privilege to be able hear their stories and celebrate the work they have done that has positively affected woman in Scotland and beyond. I am so enthused that Engendering Change Heritage Project exists and even more so now that I can be a part of it."

Amanda Stanley will be producing the documentary podcast. Stanley is known for her audio work with Mogwai, the Fermentations podcast, and Engender's existing podcast series On the Engender.

She said of the project:

"In creating this documentary podcast, I am looking forward to meeting and capturing stories from some of the organisation’s founding members, as well as taking the time to dig into the history of Engender through its fascinating archive.

I am excited to produce an audio series which will share the legacy of Engender’s success and growth across the past quarter of a century, as well as highlighting the organisation’s long standing relationship with other equalities organisations in Scotland.”

Members of the public are invited to submit nominations for women, groups or campaigns who should feature in the project, either as photograph subjects, interviewees, or simply to provide background information about any area of women's equality campaigning. Nominations can be made online at engender.org.uk/engender25.

This project was funded by the Sharing Heritage Fund from the Heritage Lottery Fund.