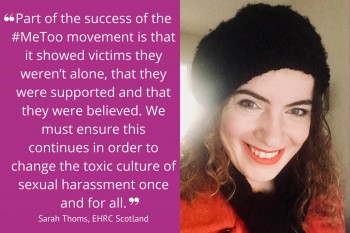 Sarah Thoms is a Senior Associate at the Equality and Human Rights Commission, she is responsible for all Communications work in Scotland which covers media, parliamentary affairs and stakeholder engagement. Sarah loves fashion, art and her dog Audrey. Here, she breaks down the EHRC's new report on sexual harassment in the workplace:

NDAs, or Non-Disclosure Agreements are quite a familiar term for those of us who are addicted to the world of celebrity, particularly in America where the entertainment industry is just a house of sand built on legal fees.

Around awards season in particular, I take great pleasure in office chat about the pretty dresses and all the various Hollywood gossip. I find it all fabulous, glamorous, cathartic and cleansing and I don’t care who knows it.

This year though, the Non-Disclosure Agreements weren’t just a shroud protecting the production schedule of Keeping Up with the Kardashians, and the Oscars weren’t just about whether the sequin sheath gown has seen its last day.

This year the production was something altogether more sinister. Hollywood had been utterly rocked by allegations of abuse, harassment, sexual assault and rape by powerful men at every level of the industry; even the Red Carpet interviewer was embroiled in serious allegations against him. These legally binding NDAs had prevented victims from seeking justice for years and the Oscars were a horrifying roll call of those who had suffered abuse or been blacklisted and had their careers ruined for rejecting these grotesque figures in charge.

And of course it doesn’t stop in Tinsletown, #MeToo reports have swamped us in every industry from the legal profession, FTSE100 companies, Holyrood, Westminster and today, I noticed even the watch makers and jewellery association are dealing with their own sexual harassment scandals. So it’s pretty endemic right?

What did the EHRC find?

Women are at risk in every single walk of life. From cat calls walking down the street, to unwanted sexual contact in work, to men we go on dates with who won’t accept rejection, or partners with a toxic and absolute need for control. Women are punished, targeted for speaking up, it’s constant. Last week’s #ToxicTwitter campaign with the First Minister, Ruth Davidson and Kezia Dugdale showed exactly what powerful women who refuse to be silenced in the face of misogynistic attacks have to go through.

That’s why our findings around sexual harassment in the workplace are sadly no surprise to us at the Commission.

We gathered evidence from 1000 individuals and employers across Great Britain. Half of those who had experienced sexual harassment hadn’t reported it to anyone in the workplace because they didn’t feel it would be taken seriously, and thought that perpetrators would be protected and feared victimisation.

Of the other half who reported incidents to their employers, many said no action was taken as a result, and even in the cases where action was taken, this often made life worse for them.

Of the employers who responded, only two out of five included information on harassment in their induction processes; and only a quarter provided information on what constituted appropriate behaviour towards staff. Only two employers told us that they’d taken steps to support agency workers to report harassment. It doesn’t exactly instil confidence and indeed reaffirms our view that a corrosive working culture has silenced the voices of victims and normalised sexual harassment across Britain.

What does the EHRC recommend?

It is essential that we strengthen the law where it needs to be changed, but also work to tackle changing the culture that leads to such toxic behaviour embedded in society. How many times have we heard ‘that’s just how he is’ ‘can’t you take a joke’ ‘you should be flattered’? It’s all about power, it’s all about violence against women and we say enough is enough.

Our recommendations to tackle the problem include focusing on changing culture, greater transparency, and strengthening legal protection. We are calling on UK Government to introduce legislation preventing employers from using these dreaded non-disclosure agreements to sweep sexual harassment under the carpet and protect their reputation. Instead, they should only be used at a victim's request.

We also call for the time limit to bring a claim of sexual harassment to tribunal to be extended to six months, reflecting the time taken by many individuals to raise complaints. This, along with the commitment by the Scottish Government to abolish Tribunal Fees, should ensure more women can seek the justice they deserve.

We also have another recommendation based around an online reporting tool named the Callisto project. The three stages of it are:

This sort of project adapted for the workplace would be incredibly useful for a number of reasons, not least to put control and agency right back in the hands of the women who have been assaulted or harassed.

In Scotland we will work with Scottish Government and employers to explore the potential of online reporting improving policy and work place culture.

Part of the success of the #MeToo movement is that it showed victims they weren’t alone, that they were supported and that they were believed. We must ensure this continues in order to change the toxic culture of sexual harassment once and for all.

The full report including survey responses and all recommendations can be found here.

The legal stuff: Under the Equality Act 2010, employers are liable for acts of sexual harassment by one employee towards another unless they have taken all reasonable steps to prevent it. There are currently no minimum requirements, but reasonable steps should include an anti-harassment policy and appropriate procedures for reporting harassment and taking action.