Claire is attending this year’sAGORA feminist school organised by the European Women’s Lobby. Her place has been sponsored by Engender who offered funding for a young BME feminist from Scotland to attend. We are hosting a series of blogs by Claire throughout her time at AGORA. Here she reflects on the final leg of her journey. 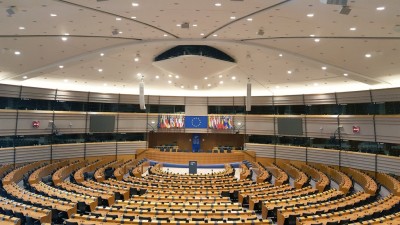 Visiting the European Parliament is one of the highlights of Young Feminist Summer School. Despite having been up late the night before for the party, there is a buzz about the group that carries me through the tiredness. We get up early for breakfast, double check that we have our passports, and it is time to go. The parliament building is visually stunning, a modern fusion of glass and chrome. All the flags on display, the variety of languages on every sign, convey a politics of unity and consensus that resonate with me, reflect the purpose behind the AGORA ’16 group.

Ahinara, one of the Young Feminist Summer School attendees, delivers a talk on the European Union’s significance to her, describing her time writing about the institution as a journalist and then interning from the EU upon realising its power for enacting social change. Her enthusiasm and knowledge chipped away some of the mistrust I feel towards large bodies of government. As Audre Lorde said, “the master’s tools can never dismantle the master’s house” - in broad terms, my view was that the state existed as a fundamentally patriarchal and colonial institution and, as such, was fundamentally an oppressive structure. But the words of another attendee have been playing over in my mind concerning the European Union: “government has the power to liberate as well as oppress.” We learn from each other constantly during AGORA.

The next session is inspirational. Malin Bjork and Soraya Post, two MEPs active on the femme committee, come and speak to us. That the Young Feminist Summer School is worth fitting into their busy schedules is striking: I feel aware that not only of our existing achievements, but our potential for enacting change in the future, give us real significance as a group. Hearing Malin and Soraya discuss their politics and careers is uplifting, as their careers make clear that driving meaningful social change can be possible. Soraya’s words in particular chime with me: she is the first Roma woman to be elected as an MEP, and the intersection between race and sex shapes her politics. Soraya’s perspective is fully humanitarian, and this is in no way a cop out of claiming the label feminist: she fights for the humanity of Roma women and men, women around the world, to be recognised. The basic definition of human that shapes Soraya’s humanitarian politics does not stop at white and male – as is too often the case – and her passion for justice is wonderful to behold.

Soraya and Malin belong to different parties. They hold different perspectives, particularly with regard to the mainstreaming of gender. What strikes me is how their disagreements are in no way a barrier to them working together constructively, making the world a better place for women and girls. Many governments, especially the British Parliament, could stand to learn a great deal from their methods. Setting aside political point-scoring and one-upmanship not only brings integrity to politics, but brings about meaningful results.

I wasn’t prepared for how powerful an experience visiting the European Parliament would be. For the British women among the group, it is a poignant moment in the wake of Brexit. In the past, I have been ambivalent about the European Union - so concerned with reform that I didn’t necessarily appreciate the social good that it has brought about. It feels sad that I have only fully appreciated Britain’s membership of the European Union when we are on the cusp of losing it. The macho, isolationist politics of sovereignty have cost us a great deal.

That afternoon we begin learning about Appreciative Inquiry – far more exciting than it sounds. This session is, at heart, about stories and the role they play in providing us with self-definition. Storytelling is broken down into a process of three parts: storyteller, harvester, and listener. In groups of three, we take turns in each role and learn first-hand the ways in which narrative is shaped by those bearing witness in addition to the person telling the story. Sitting in the courtyard with Anna and Milena, the fountain splashing gently behind us, I am content. We share a great deal. It is good to listen. It is good to be heard.

Next, we meet local feminists involved in campaigns around Brussels, representing three organisations: Isala, the House of Women, and Garance. Isala is a team of volunteers working to prevent women in prostitution from becoming isolated, to stop society from turning a blind eye to their exploitation. Garance teaches self-defence in order to increase women’s agency against male violence, with the core aim of making women and girls feel safe, strong, and free as we occupy public space. The House of Women is, in some ways, reminiscent of Glasgow Women’s Library: it is motivated by empowering women in very practical terms. They seek to emancipate women through teaching new skills, encouraging independence, and advocate an openness that enables women to take up the public space to which we are entitled – as Adrienne Rich said, “When a woman tells the truth she is creating the possibility for more truth around her.” Hearing about their work helps us to break outside the Brussels bubble of political power and consider how the threads of feminist activism weave together to form what is a global movement.

As Soraya Post says, “you have to take your place in the room, set the agenda.” And the participants of AGORA ’16 are ready to do that. We prepare our own workshops and invite our fellow feminists to attend. The expanse of knowledge present and available in the room is extraordinary. From feminist podcasts to instructions on grassroots organising, a range of practical skills are covered. With discussions on the role choice plays in feminism and how to be a white ally to women of colour, the distance between feminist theory and practice is bridged with finesse.

The next morning I facilitate a workshop on intersectionality and co-existing identities in the feminist movement with Rosa, a Brazilian feminist with a flawless undercut and keen insight into geopolitics. The honesty women bring to the group is humbling, and I am profoundly touched that they are prepared to share so much of themselves in the discussion. The personal is political, a truth unavoidable when considering intersectional feminism. Running workshops is a very rewarding experience. I received facilitation training from Glasgow Women’s Library, who are always keen to upskill their volunteers, and have been putting on workshops since. It is a wonderful thing, to be able to do what you believe in. Afterwards, I go to a workshop facilitated by Hélène of Osez le Féminisme in which we share strategies for activism. My own plans for Sister Outrider slide into sharper focus.

We spend the afternoon at Amazone, where almost twenty women’s organisations hold office space. I decide to write, reflect, and take some time for myself in their sumptuous garden. Nearby, an impromptu workshop runs. It is a peaceful place. We return in the evening for our final party – bold lipstick and a black dress turns out to be a popular look. I am described as “witchy” – exactly the aesthetic I was striving for. Though we are openly critical of the beauty standards to which women are held, there is a lovely discussion about our lipstick choices, the ways in which our female friends have used it as a means of encouragement and support, a way to help us find little moments of joy. My own lipstick, Vintage Red, carries enough such history that every application brings me a measure of daring.

The wine flows, and so too does the conversation. It is lovely to be young, to be surrounded by other women as the night draws in, and to have the freedom of moving through Brussels as une femme seule. On such evenings, it feels as if anything is possible. And for the women of Young Feminist Summer School, it is.