On the Engender: Gender Matters Online 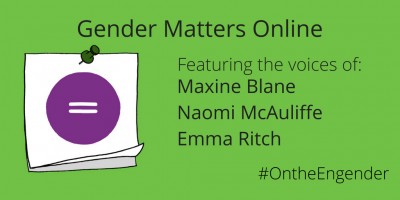 In our final episode examining gender and public space on On the Engender, our panel discusses the internet as a gendered space and why gender matters online with host Alys Mumford.

Here she shares some personal reflections on women's experiences of online abuse and the relationship between gender and the internet as a public space:

A few weeks ago, a friend of mine posted on facebook that she had been sexually harassed on the way home from work. As you might expect, we all rallied round to leave sympathetic messages and check she was ok. One of the comments on the original post used the phrase ‘men are trash etc’. My friend who posted this comment was bemused to receive, seconds later, a notification telling her that it had been deleted as it contained hate speech.

Assuming this must be a mistake, we tested Facebook’s monitoring algorithms. I posted ‘men are trash’ as my Facebook status. Again, almost instantaneously my status was deleted, flagged for hate speech, and I was logged out of Facebook on all of my devices. A male friend decided to try the same thing. His ‘men are trash’ comment remained untouched for 24 hours, even after I had (with his permission!) reported his comment for hate speech.

So far, so trivial, right? It’s well known that Facebook’s moderation standards are a law unto themselves, and there are lots of other ways to express our frustration with the patriarchy online. But when I checked into my ‘support inbox’ to request a review of the decision (which failed), my blood began to boil. I noted that the previous time I had reported a comment for violating community standards was during the local elections in 2017 when a man was repeatedly posting horrific things about women standing for election in Edinburgh.

Several people including myself had reported a particular post, which shared an image of a female candidate along with sexually violent language, only to be told by Facebook that it didn’t contravene their community standards. It was ok though, Facebook told me, because I could just block him if I didn’t like seeing nasty things like that in my timeline. Women unable to make a light-hearted generalisation about men in response to violence; men able to make graphic and violent comments about women. And women pay the price of having to self-censor just to know they can safely comfort a friend, or having to constantly block, mute and unfollow to avoid violence.

This is the problem when we don’t see the internet as a gendered space. When we refuse to accept that all of the patriarchal problems which plague our society exist online too and, if anything, are more extreme; when abuse comes from the keyboards of a thousand anonymous strangers, and women’s voices are silenced.

This is just one of the many themes we cover in this month’s episode of On the Engender which is looking at the internet as a public space. I hope you enjoy the show, and let us know what you think in the comments or on social media using #OntheEngender.

Listen to the episode in the player below, and make sure you subscribe so you don't miss the next one: