Data matters in our response to Covid-19

As Engender continues to work to ensure that women's equality is at the heart of Scotland's response to Covid-19, our Executive Director, Emma Ritch, writes about why gathering the right data is so important. 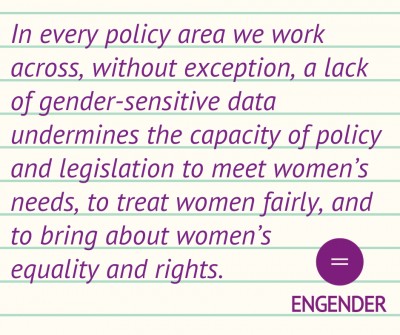 One of the ways in which we are trying to understand Covid-19, and respond to the devastation it has brought to families and communities, is through numbers. The number of tests administered to populations, the numbers of people admitted to hospital, and the numbers of deaths attributable to Covid-19 are reported on rolling news. Readers check the charts produced by data journalists for signs that incidence of the virus has peaked. Numbers are studded through reporting on possible strategies for loosening lockdown while constraining transmission of the virus.

Engender is a little obsessed with data. During our 27-year history, we have worked to advocate for better quality gender-sensitive sex-disaggregated data.* Those of you who are listening to our “You’ll have had yer feminism?” podcast about the early years of Engender will know that we were formed with the purpose of ensuring that the detail of women’s lives was visible, counted, and understood in policymaking processes.

A quarter of a century later, despite so much other progress, we are still banging the same drum. In every policy area we work across, without exception, a lack of gender-sensitive data undermines the capacity of policy and legislation to meet women’s needs, to treat women fairly, and to bring about women’s equality and rights. Almost every research report, parliamentary briefing, or consultation response that we publish calls for better use of data about women’s and men’s distinct experiences. We’ve also lobbied the Chief Statistician’s working group on sex and gender to explain just how far we think Scotland has to go to live up to its obligations and ambitions on data and women’s equality.

Covid-19 demands an emergency response that integrates considerations about gender. Evidence tells us that in working at the speed that crisis demands, governments, agencies, and other public bodies can overlook critical differences between men’s and women’s lives. In the Ebola, Zika, and SARS pandemics, this led to significantly worse outcomes for women and girls, as budgets from governments and aid agencies for sexual and reproductive health were gutted in order to fund crisis programmes. The lifelong benefits of education was denied to cohorts of girls as political focus moved away from the initiatives, including providing period products, that kept them in school. 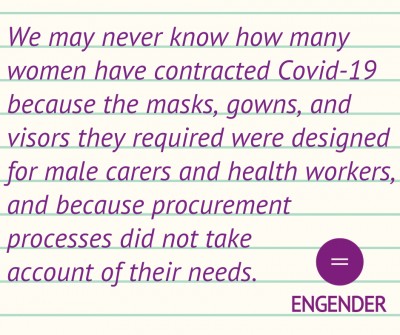 It is likely that some state actors have already overlooked women’s needs in devastating ways. For example, the TUC and its members unions have long campaigned for personal protective equipment that is designed to fit and be used by women. We may never know how many women have contracted Covid-19 because the masks, gowns, and visors they required were designed for male carers and health workers and because procurement processes did not take account of their needs.

In order to avoid making mistakes in response to Covid-19, public bodies and agencies, including Scottish Government, must analyse and use evidence that captures women’s experiences. UN Women and the World Health Organisation have joined together to make a global data dashboard that tracks cases of Covid-19 and also reports on other indicators like changes in the reporting of domestic abuse and demand for refuge and shelters. In Scotland, Engender is committed to building and enabling an evidence-base for gendered action. We are doing this in three key ways.

--
* Because ‘gender-sensitive sex-disaggregated data’ is a mouthful, it’s often shortened to ‘gender-disaggregated data’. This makes statisticians a little bit cross because it’s not really accurate, but makes tweeting about it much easier.
Posted on April 28 2020 at 10:14