Between now and the local elections on May 5th, we will be publishing a series of blogs from the Equal Representation Coalition. They’ll be taking a look at the state of equality in our politics at the moment, discussing their work in tackle barriers to participation, and will be exploring the crucial role that accurate data plays in achieving equal representation in our councils and parliaments and why we need more of it. Here, Engender’s Equal Representation Development Officer Jessie Duncan is kicking us off with an introduction to some of the key issues and why gathering data is vital to achieving equal representation. 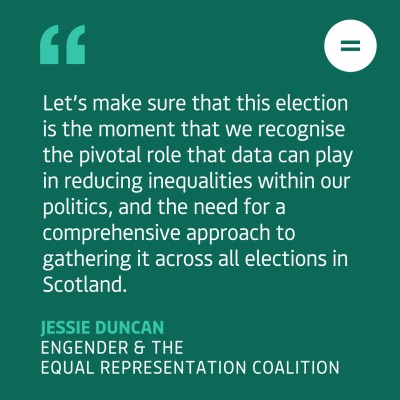 The Equal Representation Coalition brings together organisations from across the equalities sector in Scotland with shared goals around improving access to politics for people from underrepresented groups (with particular attention to women, minority ethnic people, LGBTI+ people and disabled people) in order to achieve equal representation in our councils and parliaments. Today the Equal Representation Coalition includes Engender, The Equality Network, CEMVO, Stonewall Scotland, Women 50:50, CRER, BEMIS, Inclusion Scotland, YWCA Scotland and ElectHer. The Coalition meets regularly to discuss their own work as well as current issues relating to equality in civic and political participation - and also to share learning and explore opportunities for collaboration. Notable to date has been the creation by some Coalition members of the Equal Representation in Politics Toolkit, a set of resources aimed at political parties to improve internal practice on equality, diversity and inclusion.

With last May’s election resulting in some positive outcomes in terms of representation, much fanfare has been made of the so-called ‘diversity parliament’, which saw a record number of women elected including the first women of colour and the first permanent wheelchair user. This is progress and it is of course to be celebrated - however looking at our councils using the information we have available (which is far from perfect, as I’ll explain below), it’s quite a different story. Women make up 29% of councillors, and there are only 17 BME councillors. As with parliament, we don’t actually have reliable statistics on the numbers of representatives who are disabled or LGBTI – however what we do know tells us clearly that underrepresentation is a major problem.

Councils make decisions affecting our everyday lives, as well as being key pipelines for people entering national politics. It’s essential that we fully understand the inequalities that exist, at all levels of politics, so that we are equipped to tackle them.

For the organisations of the Equal Representation Coalition, shedding light on these inequalities and developing solutions is a foundational part of our work; whether that’s through policy advocacy, working to support civic participation in the community or in providing training or direct support to people involved in politics. In November several Coalition organisations submitted evidence on barriers to participation in local politics to the Scottish Parliament Local Government Committee. This recognition from decision makers of the issues and the scale of the challenges we face in creating an environment where equal representation in politics can materialise is a step in the right direction, but it will only get us so far.

We are currently missing a key ingredient that has the potential to supercharge the work to address these barriers and reduce inequalities in how people access politics. That key ingredient is data - robust, detailed and intersectional data regarding the protected characteristics of our councillors, MSPs and MPs. Without this information it is very difficult to map the causes – and importantly, formulate the solutions to – the chronic underrepresentation of women, Black and minority ethnic people, LGBTI+ people and disabled people.

At the moment, no data which would tell us about the diversity of our representatives is collected and published by official sources such as councils, government or political parties. The data we do have is very limited, and much of our understanding is based on unsound methods, anecdotal knowledge and assumptions. It really shouldn’t be like this. Despite Section 106 of the Equality Act providing a legislative basis to require political parties to release diversity data on candidates, this has never been enacted (and even if it was, local elections are not covered under the provisions of the Act, which is a crucial omission). Further to this, parties themselves have made commitments to audit and publish the diversity of their membership, including by signing up to the Equal Representation Coalition’s Vision & Asks. To date though, we have seen very little progress on these commitments.

This year’s council elections offers a chance to begin moving the dial. For the first time, the Scottish Government have included a survey looking at diversity within candidate nomination packs (it is also available to complete online). This is a real opportunity to gain vital information on who our candidates and elected representatives are – and crucially to capture whose voices are missing. But unlike the rest of the candidate nomination documents, the survey is optional. In order to make sure that this chance doesn’t pass us by, the Equal Representation Coalition is calling on candidates – whether from parties or independent – to make sure that the survey is completed and returned.

With the Scottish Government looking at data gathering at the same time as the Scottish Parliament has been examining barriers to participation in politics, the inextricable link between these two issues is clearer than ever. Let’s make sure that this election is the moment that we recognise the pivotal role that data can play in reducing inequalities within our politics, and the need for a comprehensive approach to gathering it across all elections in Scotland.

Over the coming weeks, in recognition of these issues, Equal Representation Coalition partners will be blogging about their work tackling barriers to participation in politics, the importance of diverse representation, and what better data could mean for their work and for us all.