Cracks in the Glass Ceiling or Just a Trick of the Light? New Report on Women on Boards 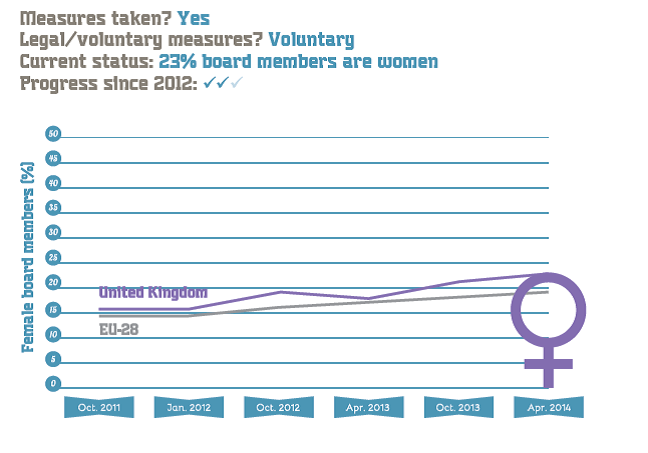 What is this report about?

As part of the European Women’s Lobby’s Beijing+20 focus month on ‘Women in Decision-Making’, February sees the launch of the EWL’s latest report on women on boards, entitled ‘Women on Boards in Europe: Second Progress Report. Cracks in the glass ceiling or just a trick of the light?’

This Second Progress Report is part of the EWL’s ongoing work to ensure that parity at all levels of decision-making becomes reality. It tracks developments, progress, and stagnation regarding women on company boards in 11 European countries, including the United Kingdom, since the EWL’s first Progress Report on Women on Boards in 2012 – which was awarded the European Public Affairs Award for Report of the Year 2012.

What’s happening in Europe regarding women on boards?

Since the 2012 report, and ongoing campaigning in favour of binding legislation regarding gender parity on company boards across the EU, an EU Directive which aims to attain a 40% gender balance on non-executive boards in large, publicly listed companies across the EU has been proposed and is currently under consideration by the Council. Commissioner for Gender Equality Věra Jourová has committed to seeing the Directive passed within 2015.

We therefore find ourselves at a key moment to reflect on the developments in this area since 2012 across Europe and to learn from this reflection and analysis in order to best inform current and future policy-making in this area.

What has the United Kingdom done to crack the glass ceiling since 2012?

The report makes five evidence-based recommendations, which should be taken into account as the future policy landscape regarding women in decision-making at the EU level and the national level is determined:

Gender parity in positions of economic power is of vital importance when it comes to justice, democracy and sustainable growth. Diverse decision-makers and leaders better represent, better understand, and better respond to the desires and needs of women and men in their diversity – and will be more open to cultivating a new style of leadership which will lead to much-needed transformative social change. As an important step forward towards a progressive, sustainable and inclusive Europe, the European Women’s Lobby demands the adoption and implementation of the current proposed EU Directive on women on boards without further delay. Moreover, we strongly encourage national governments to go above and beyond its requirements and to implement stronger measures to achieve gender parity at all levels of decision-making.

You can see the report with full references, and information on other countries, here.