Census report: what does it mean for gender equality? 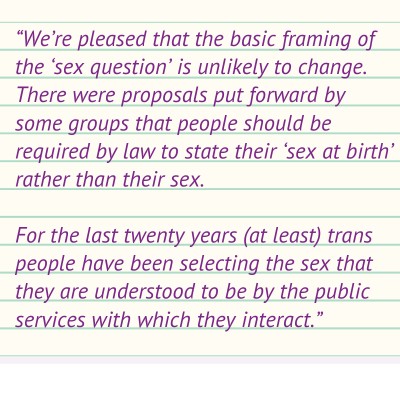 Today the Culture, Tourism, Europe and External Affairs Committee has released its Stage 1 report on the Census (Amendment) (Scotland) Bill[1].

Because, with the best will in the world, not everyone enjoys poring over committee reports, we’ve summarised some of the key points, and what they mean for women’s equality, here:

What is the committee report?

The committee was considering a one page Bill that would amend the Census Act 1920 to enable voluntary questions to be asked in the 2021 Scottish Census about sexual orientation and trans status. The focus of the Committee evidence sessions was expansive, and ultimately convened discussions about a whole range of issues to do with trans rights, gender identity, and their interrelationship with women’s equality and rights. In response to some evidence submitted to the committee that was inaccurate and proposed changes to Census process that would undermine the collection and analysis of gender-disaggregated data in Scotland, we joined with other national women’s organisations to submit a note to the Committee setting out our position. You can read the note here.

What did the committee say?

At this stage, the Committee has produced a report that will be debated in the Scottish Parliament on 28 February. One of the key considerations was that National Records for Scotland carry out further consultation with women’s organisations on the precise wording of questions on sex and trans status that will be asked in the Census. We’ve outlined the three biggest (for us) recommendations from the report:

No question about sex at birth 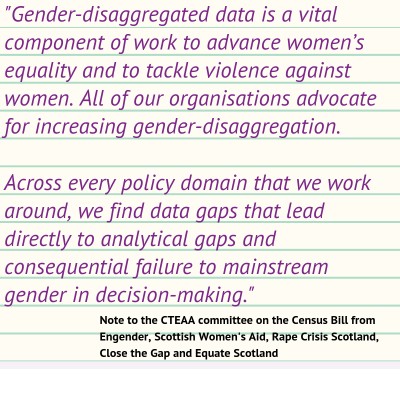 We’re pleased that the basic framing of the ‘sex question’ is unlikely to change. There were proposals put forward by some groups that people should be required by law to state their ‘sex at birth’ rather than their sex. For the last twenty years (at least) trans people have been selecting the sex that they are understood to be by the public services with which they interact. As we explained in our note to the committee, making this seismic shift in the ‘sex question’ would not provide an accurate picture of Scotland’s population, would discourage trans people from completing the Census, and would have a chilling effect on public sector collection of gender-disaggregated data because of the way trans people’s privacy is protected by law. It would also mean that trends in Census data from previous decades would be disrupted.

It’s great that the Committee listened to calls from Scottish Trans and other equalities organisations for there to be optional questions on sexuality and trans identity. Those with long memories might recall that these were debated ten years ago, but ultimately shelved. These questions will ensure that people are able to describe themselves more accurately, which will provide a sharper picture of Scotland’s population. Significantly, the Census is often seen by other public bodies and organisations as the best practice for data collection, but in this area had now fallen behind the data equalities practice of other organisations. We hope that these new questions will lead to more competent and comprehensive questions about equality across Scotland, leading to better service development for lesbian, bisexual, and trans women and young people. 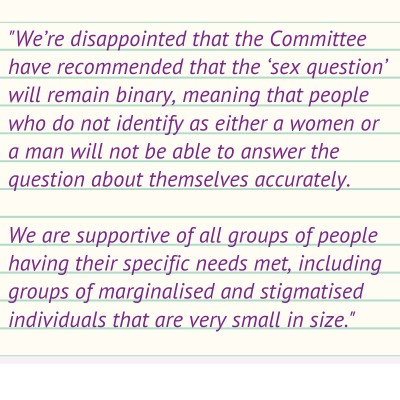 We’re disappointed that the Committee have recommended that the ‘sex question’ will remain binary, meaning that people who do not identify as either a women or a man will not be able to answer the question about themselves accurately. We think this is a mistake – as a numerically small population, this means we are not likely to have an accurate sense of the proportion of Scottish people that would describe themselves as non-binary. We are supportive of all groups of people having their specific needs met, including groups of marginalised and stigmatised individuals that are very small in size.

We know that public bodies are already discussing and considering how to capture data about the number of non-binary service users and staff members they have. If the Census doesn’t engage with this task, then this is likely to lead to divergence in public bodies’ approaches to data around sex. Ultimately, we see a risk to the (already poor) practice of public bodies in gathering and analysis gender-disaggregated data.

The Committee’s report will be debated in the Scottish Parliament on 28 February. The report notes that the Committee support the general principle of the Bill, but ‘recommends that the Scottish Government sets out its position in relation to [a list of] issues ahead of the Stage 1 debate on the Bill’.

Engender will carry on engaging with questions on the census where they are relevant to women's equality, including continuing to work with the National Records of Scotland on the wording of specific questions.

[1] At Stage 1, the lead committee (in this case CTEEA) considers the general principles of the Bill and then reports to Parliament. Consideration of the fine detail comes later.