Celebrating the past year and welcoming the new

It’s been a great year for Engender, with fantastic events, projects, and research work happening throughout 2015. We’ve supported our amazing #FeministFest bloggers, held inspiring conferences with sister organisations, and chatted to folk around Scotland about why gender matters. We’ve seen increased public interest and political will for women’s equality, recognition of the importance of gender mainstreaming, and our work on women and welfare reform has ensured that decision makers know that women bear the brunt of cuts. You can see details of these things and more in our annual report, along with some pictures from the past year (see if you can spot yourself!)

The Engender office will now be closed for three weeks over the festive period, so we wanted to let you know about what we’ve been up to over the past couple of months, and our exciting plans for next year! 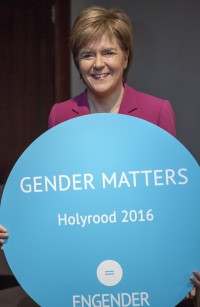 We’ve had an incredibly busy few months with events. We were at party conferences throughout the autumn, spreading the news of our Gender Matters Manifesto and talking to party members, MPs and MSPs, local councillors, and ministers.

As well as that, we hosted several exciting events including a conference with Women 5050 on women’s representation in public life , consultation events with disabled women, and two film nights exploring feminism and intersectionality during Black History Month.

As well as producing our Gender Matters manifesto in consultation with individuals and organisations across Scotland, we’ve produced the following briefings:

And responded to consultations on:

In the first few months of 2016 we’ll be focusing on the Scottish Parliament elections, as we think next year is a fantastic opportunity to get some real commitments on women's equality. As well as working with all parties to promote the twenty asks in our gender matters manifesto, producing briefings and holding events, in the new year we'll be publishing loads of resources to help you make the most of the elections. From how-to guides to holding hustings, information on how to contact your candidates, and some fun ideas to make the debates a bit more interesting, we'll be doing all we can to support you.

We're also really keen to help out groups who want to hold events or put pressure on their candidates. If you're interested in getting some support, whether it's practical advice on how to pull an event together, a workshop to help you figure out your group's priorities, or simply a friendly chat about your ideas, please get in contact.

We hope you have a fantastic few weeks whatever you may be doing, and we look forward to working with you again in the new year!