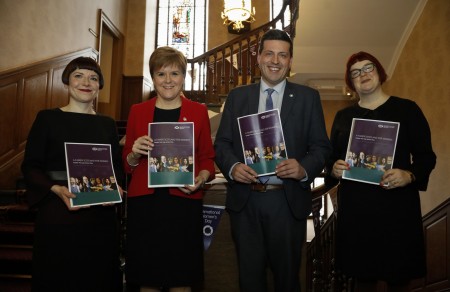 Our Executive Director Emma Ritch reflects on the feminist journey to Scotland's first action plan to tackle the pay gap, and welcomes a substantial step towards women’s and girls’ economic justice.

Feminist policy advocacy requires determination, grit, and the willingness to work towards sometimes infinitesimal change in pursuit of a different world for women & girls. When we do see what amounts to a leap forward in a long-term, shared advocacy project it’s vital to pause, appreciate the moment, and recognise the women who collaborated over years to see it happen.

All feminists will be broadly familiar with the gender pay gap. This single indicator represents a whole host of inequalities that hang like a cloud over the idea that women should have economic autonomy and independence. Engender doesn’t work on employment per se (we leave that to experts Close the Gap) but the pay gap is also caused by women’s and girls’ persistently different experience of education, employability, domestic and reproductive labour, men’s violence, and social security. These differences are bound up with gender, the socially constructed matrix of culture, attitudes, stereotypes, and beliefs about what men and women should be and do.

At the end of 2016 the Scottish Parliament’s Economy, Jobs, and Fair Work Committee announced an inquiry into the gender pay gap. Engender submitted a response that rehearsed the broad range of policy activity that needed to happen to come anywhere close to closing the pay gap, contrasted it with the timid and narrow efforts that had come before, and called for a single action: a national strategy on the pay gap. Close the Gap made the same call, and together we advocated for this approach in our oral evidence to the Committee.

The Committee’s report, which was bold and wide-ranging, did recommend a national strategy but this was initially translated by Scottish Government into a commitment to “determine the feasibility of having a coordinated cross Government action plan aligned to our Labour Market Strategy”. Engender continued to brief on the necessity of a strategy or action plan.

Thanks in large part to senior gender-competent civil servants, we had some hugely constructive scoping discussions about the pay gap and the need for cross-directorate work. Working with Close the Gap, Engender was commissioned to support the development of actions for a Scottish Government action plan on the pay gap that drew on the Government’s approach to bringing in feminist expertise to work on the Domestic Abuse Act. We also joined the Ministerial Working Group established to steer the work, along with fellow feminists Talat Yaqoob from EQUATE Scotland, Dr Ima Jackson from Glasgow Caledonian, and Emily Thomson from the WiSE Centre for Economic Justice.

For nine months in 2018 we worked with Close the Gap to produce briefings and draft recommendation sets that were tested at a series of workshops with civil servants and stakeholders on childcare and early years, employability, social security, education, further and higher education and lifelong learning, procurement, labour market, and economic development. This collaborative approach to applying a feminist lens to policymaking has seen Scottish Government use external gender expertise to make better policy.

A Fairer Scotland for Women launched on International Women’s Day 2019, exactly two years and one day after Engender and Close the Gap gave evidence to the Economy, Jobs, and Fair Work Committee. As the first pay gap action plan in Scotland, it is bold and it is well-gendered.

It also builds directly on over a decade of work by Close the Gap, Engender, the Scottish Women’s Budget Group, the Equal Opportunities Commission, and academics at the WiSE Centre for Economic Justice. International Women’s Day often brings a wave of brands trying to hook the sale of their product onto a hollow gesture towards women’s equality. We’re glad that 2019 saw a substantial step towards women’s and girls’ economic justice, and we’ll be working hard to see its promise delivered.
Posted on March 14 2019 at 11:21