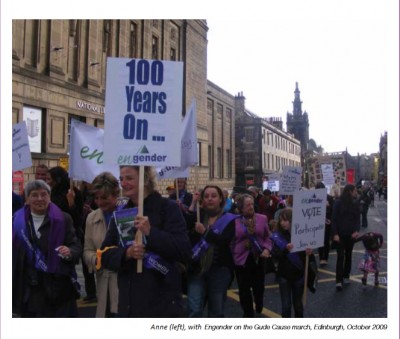 We feel it is important to celebrate our history and those who have helped make it.

Recently, at the end of July, we lost an outstanding feminist – Anne Hepburn. Anne died just short of her 91st birthday. She was a woman of faith which she combined with a lifelong commitment to feminism. Throughout her life she campaigned and advocated for equality, peace and justice, challenging discrimination wherever she saw it, without fear or favour.

Many of us got to know Anne in the 1980s when she was prominent not only in the Church of Scotland and its Woman’s Guild but also in the Scottish Convention of Women (SCOW), in particular in following through on the United Nations’ Decade for Women, launched after the first UN World Conference on Women conference in 1975. She encouraged and worked with a diverse range of women and men, for Anne was not only ecumenical in her faith but also in her feminism. For example, Kath Davies in SCOW and the Scottish Joint Action Group, Yvonne Strachan (who was Convener of SCOW at the time of the Constitutional Convention, and signed the Claim of Right), and Lesley Sutherland, who was involved in setting up the European Women’s Lobby, were all supported and encouraged by Anne.

Anne was always proud of the fact that as the only representative from Scotland at an initial scoping conference in London on setting up what was to become the Lobby, her intervention, insisting that Scotland (and Northern Ireland and Wales) had to be appropriately represented in the UK structure, secured an equal place for Scotland in what became the UK Joint Committee of Women. Together with her friend, the late Maidie Hart, she worked through SCOW and with others to set up new structures needed for new challenges, including Engender. Her activities ranged internationally too – in Africa, where she had a special bond with Malawi, in Canada, America and in Europe.

Her energy and commitment, her humour and her sense of fun (eminence was no protection against Anne’s wit­ and wisdom) remained undimmed by advancing years and family loss. At the age of 84, in October 2009, she walked the whole route of the Guid Cause centenary celebration of the suffragette march. Lesley Orr provided a fitting eulogy at her funeral covering the wide and deep contribution of a talented and determined woman. We recall with gratitude Anne’s contribution to advancing feminism and equality in Scotland – she had indeed ‘a strong arm’ which she used to great effect in the guid cause.