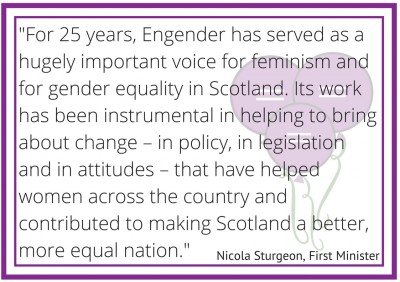 2018 marks the 25th anniversary of Engender, Scotland’s feminist policy and advocacy organisation. A reception at the Scottish Parliament tonight celebrates the progress we have seen for women’s rights in Scotland, and acknowledges how far we still have to go to achieve full gender equality.

First Minister Nicola Sturgeon will be speaking at the event, reaffirming her commitment to feminist leadership.

Speaking in advance of the event, she said:

“For 25 years, Engender has served as a hugely important voice for feminism and for gender equality in Scotland. Its work has been instrumental in helping to bring about change – in policy, in legislation and in attitudes – that have helped women across the country and contributed to making Scotland a better, more equal nation.

“This reception is a great way of celebrating these achievements, but it is also an opportunity to reflect on what more we need to do – together – to create a truly equal society.

“As we celebrate the centenary of the first women winning the right to vote in the UK, we can be proud of the progress that has been made. But we must also acknowledge that there is still much to be done, and we reaffirm our commitment to taking the steps necessary to fully realise gender equality in our society.”

“We are delighted to be celebrating the 25th birthday of Engender this year. For the past quarter of a century, Engender has been campaigning for women’s economic, political and cultural equality in Scotland. The progress that has been made towards these things is testament to the determination of feminist campaigners who have been fighting for change in countless different ways. Tonight we will pay tribute to these women on whose shoulders we stand, and prepare for the work that lies ahead of us to make equality a reality for women in Scotland.”

Engender was founded in 1993 by a group of women in Edinburgh, some of whom will be in attendance at tonight’s event. It has grown to become a national policy organisation, with a membership made up of women and organisations from across Scotland. Engender also has an international outlook, with Emma Ritch sitting on the board of the European Women’s Lobby, and the organisation recently submitting the Scotland response to the UN Convention on the Elimination of All Forms of Discrimination Against Women.

The party at the Scottish Parliament will see archival material from Engender being displayed, and is sponsored by Christina McKelvie MSP.