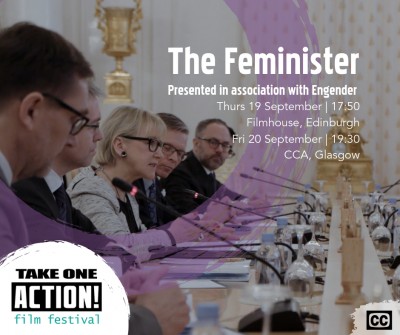 Margot Wallström certainly believes it can, and proudly declared she was setting Sweden on the path to a ‘feminist foreign policy’ in 2014.

Despite this, her resignation announcement last week, after 5 years as Sweden’s foreign minister, didn’t mention her feminism and instead described her role as ‘promoting Sweden's security and prosperity in the world’. In reality this has meant a focus on arms exports and a regressive migration policy. Both things you would be hard-pressed to describe as feminist, but her description misses out her other work on sexual violence, on nuclear disarmament, and in defence of women’s rights.

One of the films Engender is pleased to be sponsoring at Take One Action this year is a fascinating glimpse into Wallström’s first year as foreign minister. When I first watched it, I was filled with admiration of her tenacity, and with despair at the patriarchal and unwieldy structures in which she operates (and with which she colludes). I was also left with dozens of questions about the impact feminism can have in a political sphere which sees unfettered economic growth as success, neoliberalism as global cooperation, and war as an investment opportunity. The age-old problem: is feminism strong enough to change systems from within? 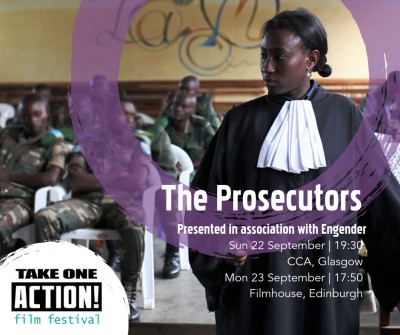 The reason we want more feminists in positions of power is not just for numerical representation, but because feminist decision-making results in different decisions being made. The Scottish Feminist Judgements Project, and others like it across the world, examine how legal judgements may have differed had feminist principles been applied throughout. One clear area where this rings particularly pertinent, for me, is in the subject of our second Take One Action collaboration, The Prosecutors. The film follows the fight for justice for survivors of wartime sexual violence, and explores why rape as a weapon of war is often not categorised as a crime against humanity.

While rape is always an under-prosecuted crime – in Scotland 2017/18 there were 2255 reported rapes, with only 247 going on to be prosecuted, and 107 convictions – it is hard to believe that with more women at the table it would still have taken until 2008 for the UN to explicitly state that "rape and other forms of sexual violence can constitute war crimes, crimes against humanity or a constitutive act with respect to genocide". Oh, and the person responsible for establishing the Office of the Special Representative of the Secretary-General on Sexual Violence in Conflict? Sweden’s foreign minister Margot Wallström. 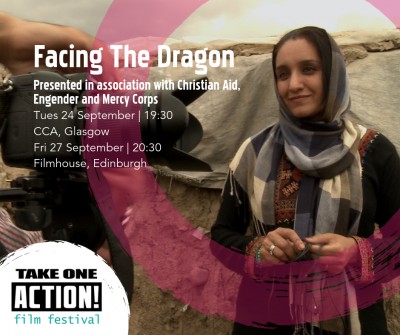 The final film we are presenting this year also explores the themes of feminist foreign policy, and has been brought into sharp focus this week with the news of peace talks collapsing in Afghanistan. I fell in love with the film Facing the Dragon when I first watched it – following politician Dr. Nilofar Ibrahimi and journalist Shakila Ibrahimkhail, it shows us the universal challenges of juggling professional life with caring responsibilities and everyday sexism while offering an insight into religious patriarchy, working in a conflict zone, and the changing role of women in Afghanistan.

Women in poor countries, Muslim countries, southern countries seem to face only two types of treatment from western commentators – represented either as without agency, oppressed and helpless, or chided for not taking their place at the table and simply leaning in to their rights like their western sisters had to (as in the now-infamous piece by Cheryl Benard). This film, featuring and created by Afghan women, is a welcome departure from that.

Documentary film can spark discussion, offer a different perspective, and lead you to ponder issues for far longer than the time you spend in the cinema itself. While headlines may be dominated by the UK’s very particular constitutional crisis, we hope these films will offer a chance to examine our place in the world, and our impact on it.