GUEST POST: Brexit - a risk to women's equality, or an opportunity to reshape gender mainstreaming in economic development?

In the week which has seen a further Brexit extension, we host a guest blog from Leanne Wilson, PhD Candidate at the WiSE Research Centre for Economic Justice at Glasgow Caledonian University. Leanne is feminist economist researching the effectiveness of gender mainstreaming as a strategy for advancing gender equality, specifically within the European Structural and Investment Funds and economic development policies in Scotland. You can find Leanne over on Twitter @LeanneWilson82 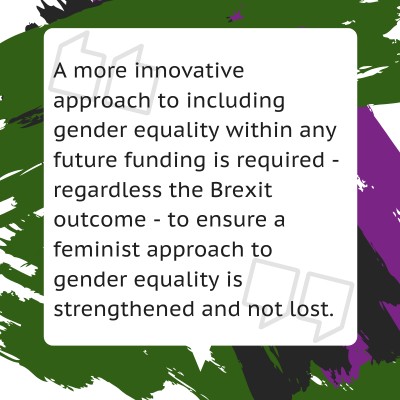 'Gender mainstreaming' has been an integral strategy for gender equality within the European Structural Investment Funds (ESIF) since the 2000-2006 funding period. Therefore, with Brexit looming and the risk of losing the strategy in economic development policies there is an urgency to assess its effectiveness. Gender mainstreaming was endorsed by the 1995 Fourth World Conference on Women and has continued to be the strategy of the EU in many of their policies. The UN define gender mainstreaming as “the (re)organisation, improvement, development and evaluation of policy processes, so that gender equality perspective is incorporated in all policies at all levels and at all stages, by actors normally involved in policy-making”.

It is contested as a strategy as it has been widely debated by feminist researchers for its ability to transform structural inequalities. It is argued that it involves two different structures, ‘gender equality’ and the ‘mainstream’ which are conflicting, and in some instances competing, frames. However, I fear that leaving the EU will derail any success it has had, and therefore I want to highlight any learning from the experience in Scotland which will ultimately inform successor funding. This blog discusses my early research findings and opinion on the success of the Scottish implementation of gender mainstreaming in economic development polices and, therefore, the implications post-Brexit.

Does Brexit pose a risk to gender equality in Scotland?

That’s what I’ve asked myself regularly since the EU Referendum in 2016. On one hand, surely it does as the EU has played a key role in ensuring gender equality is on the agenda and providing essential rights for women. On the other hand, I ask myself how much power the EU actually has to ensure the Scottish Government adheres to ‘soft’ gender mainstreaming rules, and whether they could have actually restricted our ability to focus on gender equality. Furthermore, is gender mainstreaming even an effective strategy for advancing gender equality and, importantly, social justice?

The EU made an important link between gender equality and economic development through the ESIFs which are distributed to their member states, based on their economic situation, to encourage economic convergence. Projects funded by ESIF are required to gender mainstream throughout the project lifecycle. The rationale for pursuing gender mainstreaming via the ESIF is as much about promoting economic efficiency as it is about promoting equity. The main aim of the funding is to reduce economic and social disparities and to establish the conditions which will assure long-term development. Failure to overcome the constraints to the equal participation of women and men in economic activity means that the development objectives of growth, competitiveness and employment cannot be fully achieved. Although I personally struggle with this economic motivation for gender equality, it has been instrumental in providing valuable resources for gender equality in Scotland. Projects like Close the Gap and the Highlands and Islands Equality Forum were born from ESIF.

Since the UK voted to leave the EU these funds are at risk and are a focus of great concern for local authorities and community organisations, however it does not appear to be of concern at government level. In the current funding period, 2014-2020, the Scottish Government had been allocated €941 million, of which they have chosen to allocate the highest % to employment initiatives and the supporting of SMEs. Women face multiple barriers to employment and therefore if gender has been mainstreamed, as you would expect after 20 years, then these initiatives must be important for promoting gender equality. So, are they being ‘gender mainstreamed’ successfully and helping women reach the same economic situation as men? Based on my current experience of speaking to local authorities and other organisations with funding from ESIF, I suspect not. Therefore, why not? Is it the EU, is it the Scottish Government or is gender mainstreaming itself fundamentally flawed? This is in an important question to answer to ensure any future funding, post Brexit, can be influenced and shaped to ensure women’s experiences are included.

The EU have gradually downgraded gender equality within many of their policies including the European Employment Strategy (EES) and Regional Policy. Women’s employment no longer has its own target in the EES and has been downgraded from a priority to a voluntary horizontal theme in the ESIF. Are the EU suggesting gender has been mainstreamed therefore we don’t have to prioritise it anymore? Looking at the power structure of the EU where men continue to be dominant, I would question this assumption. 100% of Presidents and 77% of the European Parliament Committee on Economic and Monetary Affairs are men. Surely if gender has been mainstreamed this wouldn’t be the case?

Are the ESIF being used to promote gender equality in Scotland?

Scotland has included a specific horizontal theme of equality between men and women within their ESIF programme this time around, perhaps showing a renewed focus. However, my research shows a substantial failure of the Scottish Government to communicate this new focus from the outset of the funding period. Partners responsible for the distribution of the funding were not even aware of the theme until years after starting their projects, despite an application process which should scrutinise their ability to meet the theme objectives.

Local authorities have become dependent on the funding and are concerned about a funding gap post Brexit which will put their vital services at risk. Important research from the Women’s Budget Group found that in 2017 women made up over two thirds of public sector employees in the UK and that the gender pay gap is 6.5% less than in the private sector. Brexit puts this at risk and, so far, I have failed to see any substantive discussions of a replacement to prevent this loss. I would love to argue that the services provided by funded projects are vital for women, and I am sure some of them are, however this is where I feel Scotland could do better. Many of the projects and particularly the employability services, are so consumed with numbers that there is little, if any, concern with the gender split or the quality of outcomes. It feels like an ‘any job will do’ approach with little effort to ensure there is no gender segregation and therefore further entrenchment of the gender pay gap. Furthermore, the Scottish Government are failing to spend their full allocation of funding and are having to return millions of euro to the EU. And the EU has suspended current payment of the European Social Fund in Scotland due to management failures. For me this raises real concern with the ability of the Scottish Government to both manage the funds and to ensure they are directed to the most vulnerable in society.

Although there has been discussion of the UK Prosperity Fund to replace ESIF, it is fair to say it has not been a priority of the UK Government. Scottish organisations are fighting for a say in the shaping of it but the control is with the UK Government, for now, which raises a whole new layer of concern. Gender equality has never been raised because, as I have been told, discussions are still at a high level. Another example of marginalising gender and possibly an indication of the failure of gender mainstreaming.

This is my dilemma: which is more reliable to assure gender equality - the EU, or the UK and Scottish Governments? Are we going to miss the influence and guidance of the EU via the ESIF or can Scotland be relied on to prioritise equality on its own? I would argue that nowhere is doing enough beyond rhetoric and the gender mainstreaming strategy within ESIF is not working at either EU, Scottish Government or local level. The funds are consumed within local authorities and others who consider gender equality is already built within their organisation and that any extra effort is not required. A more innovative approach to including gender equality within any future funding is required, and quickly - regardless of the Brexit outcome - to ensure a feminist approach to gender equality is strengthened and not lost. Therefore, while the EU are important to Scotland in terms of gender equality, I must concede that there may be an opportunity to rebrand gender mainstreaming and, if there is the political will, apply it to future economic development policies in a more effective way. This must include allocated resources from ESIF, or successor funding, to a network of gender experts that can help local authorities to design and implement projects that are gender aware. Furthermore, they can provide training and a platform for partners and projects to share experiences. The gender mainstreaming strategy implies that experts are not needed, as everyone should be responsible for implementation but this has not worked - expertise is essential to ensuring gender is incorporated. Resource are tight but they are there, proven by the fact that Scotland is not currently spending its full allocation.

Achieving the political will however is a more difficult issue, as so far this has not been forthcoming. Equality issues relating to Brexit have been left to feminist organisations to highlight and I think this is for now, unfortunately, the only way forward. We must ensure that we respond to all calls for evidence and consultations to ensure we are involved in the conversation and have the influence to shape any future economic development policies.