Last Wednesday, Monica Lennon MSP launched her Period Products (Free Provision) (Scotland) Bill at the Scottish Parliament. Engender's Communications and Engagement Manager, Alys Mumford, was there to show support. Here, she blogs about the importance of having free period products for everyone. 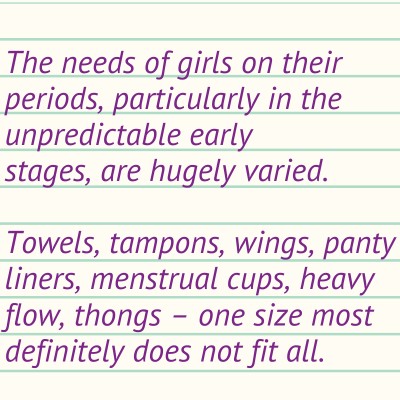 I’ve always supported the idea of free period products instinctively, and being at the launch of Monica Lennon’s Period Products (Free Provision) (Scotland) Bill really confirmed for me that it’s an issue which is vital for women and girls’ equality in Scotland.

A lot of the discussion so far about free provision of menstrual products has tended to focus on schools and colleges, as it rightly should. Periods are highly stigmatised, and my personal memories of being on my period in school involve walking down the corridors with a sanitary towel up my jumper sleeve, because to do otherwise invited the inevitable “Erm, Miss Mumford, why do you need your bag to go to the toilet?” (Side note: even decades later this fills me with fury – why can we not simply trust young people? Why shouldn’t I take my bag to the toilet? SHUT UP MR HUGHES). Whispered requests from trusted friends, because the idea of too many people knowing you were on your period was mortifying (although not as mortifying as being the one girl who hadn’t started hers yet, obviously), constantly checking with friends that you weren’t leaking during PE, and using wads of toilet paper when nothing else was available.

Toilet paper is often used as an analogy to make the case for period products and this may seem trite, but it really isn’t. Workplaces where employees were forced to provide their own toilet paper would be roundly condemned, and period products are no less vital for health and hygiene than toilet paper. Imagine a scenario where a young person has to go to the school reception, or interrupt a teacher during a class, to ask for some toilet paper. Imagine the student being quizzed on how much they needed, on what they were planning on doing in the toilet, on what they ate for dinner last night. This example isn’t facetious – the needs of girls on their periods, particularly in the unpredictable early stages, are hugely varied. Towels, tampons, wings, panty liners, menstrual cups, heavy flow, thongs – one size most definitely does not fit all.

And they shouldn’t just be available in the ladies. Of course, trans men and non-binary people using the men’s toilets may need to access period products, but we should also consider the men picking up a tampon for their girlfriend who has PE in 5th period but a music lesson over lunch, for sons getting supplies for their mums doing shift work, for brothers concerned that family finances mean their sister is going without. It’s also an important part of destigmatising periods. I remember when I was around 18, a boyfriend asking me in all seriousness how tampons worked. He hadn’t had ‘the talk’ all the girls had received, and beyond the mysterious ‘feminine hygiene’ aisle in the supermarket, period products were an alien world to him. 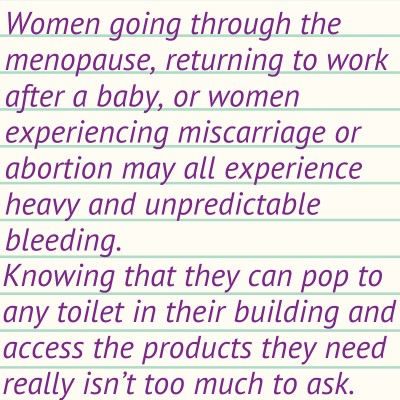 Having free period products in workplaces is also vital. In-work poverty is very real, and we know that women will often sacrifice things they need in order to provide for their family in the first instance. Shift work and antisocial hours may also mean that women don’t have the ability to access period products when they need them. Many jobs are not compatible with carrying a handbag, and we all know that there aren’t enough women’s clothes with pockets in. This, combined with the abject horror some people claim to feel when glimpsing an (unused) period product, leaves women in something of a catch 22. Women going through the menopause, women returning to work after a baby, or women experiencing miscarriage or abortion may all be experiencing heavy and unpredictable bleeding. Knowing that they can pop to any toilet in their building and access the products they need really isn’t too much to ask.

The campaign for dignity in periods is moving at a fantastic pace. Just three years ago I was giving a workshop at a university which had traditionally been very male-dominated. The feminist society I was speaking to were campaigning for there to be more period product vending machines on campus, because if a student came on her period during classes, her only option was to walk 15 minutes back to the student residence to buy something from the (overpriced) uni shop. So, only a few years back we were demanding that we remove the barriers preventing us from paying for period products. Now, there is cross-party support for a free menstrual products movement which is made up of a huge range of organisations, from unions to Girlguiding Scotland.

I hate periods, but I love that we are getting to a place where we can talk about them openly, recognise the impact they have on our lives, and see a bill in the Scottish Parliament with bloody period products adorning its front cover.

You can find out more about the bill here, and read Engender’s submission of evidence to the Local Government and Communities Committee Call for Evidence on the Bill here.