Awards season is upon us: the 2022 ceremony for the British Film and Television Awards (the BAFTAs) took place on the 13th of March, and the Academy Awards are coming up fast. As always, with awards-fever comes discussions of representation, and in this blog, Dr Miranda Barty-Taylor reflects on the changes we have seen to the BAFTA awards, and whether they are enough to bring about women's equality in the arts. 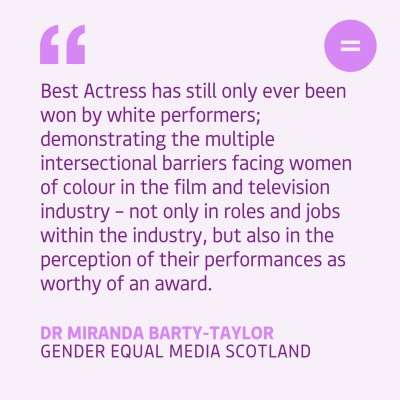 When they are done right, or even when they are done wrong, awards ceremonies can highlight the work of women and other underrepresented people within the film and TV industry. They can increase the visibility of participation on screen and off, create role models, shift stereotypes and increase the popularity – and economic viability - of hiring diverse actors and producers. But beneath the veneer and rhetoric of equality, has there been any real progress, or do prestigious awards remain as exclusive as ever? In this blog I’m going to be focusing on how far the BAFTAs have succeeded in using process-driven changes in their regulations to affect diversity of representation in the awards themselves.

In January 2020, strong criticism was levelled at BAFTA following the release of their nominee lists. From an equality and diversity perspective, the lack of progress was stark; the nominees for the performer categories (best lead and best supporting) were all white, and for the 7th year in a row the nominees for best director were all men. The hashtag #BaftasSoWhite trended and a spotlight was again shone on systemic racism and more general exclusion from awards ceremonies. Discussion ensued around specific exclusionary practices in the nominations and longlisting processes: those categories awarded by jury decisions for example, are notably more diverse than those decided by voting alone.

In response, BAFTA announced a steering group would lead a review of “the nominations and voting process, the role of distributors, the campaigning process, and the makeup of BAFTA’s membership and ultimately how these processes and conditions might be improved.” Were these mere empty words, or have the new rules and regulations actually had an impact on inclusivity in the years following?

Well, unsurprisingly, yes and no.

The first set of changes addressed the membership; the people actually watching, ranking and deciding on the nominations and winners. Previously, this was simply BAFTA members themselves - people from within the film and television industry who have paid a membership fee (£495 plus a joining fee of £150). Everyone got to vote for Best Film and dedicated ‘chapters’ also voted on specific categories such as Best Cinematography.

Following the steering group recommendations, over 1000 more members from under-represented groups were invited to join the BAFTA membership at a heavily discounted rate. It is unclear what the discount entailed, but acknowledging the need for reduced rates when encouraging new members to join is welcome, and should be the norm not just a one-off event.

How do they decide?

The second set of changes addressed the number of films members watch before voting. Previously members often had more than 100 films to watch alongside their own workloads and caring responsibilities; unsurprisingly they selected only a few to watch, often prioritising the most high-profile. How could smaller, independent films with lesser budgets and lack of distributional clout hope to compete to get their film watched by a sufficient number of voters?

In 2021, for the first time, all the films were made accessible to watch on an internal portal, and more time was given to members to watch them. For the Best Film category, 15 films were randomly assigned to each member which they must watch and rank, plus as many others as possible. For all other categories, members must watch all the nominated films before voting. It seems inconceivable that this was not the case previously – how can one possibly judge a winner from 8 ice-cream flavours without tasting each one?

The processes for Best Director and the four acting categories also changed, with longlists from the voting being supplemented by specialist jury selections before shortlists are drawn up. Interestingly these juries are not necessarily made up of BAFTA members, with regulations stating, “the balance of diversity is the overriding factor, rather than the balance of members and non-members”. In other words, if the BAFTA members aren’t getting it right then there’s a safety net of jury specialists in place to rectify imbalances. All voting members are newly require to undertake conscious voter training and a membership survey, in order to identify whose voices are missing from the judging process. Moreover, 50% of the longlist for Best Director category are now guaranteed spots for women. By ensuring the longlist is gender balanced, there is a greater chance that 50% of the eventual shortlisted directors will be women – time will tell if this ‘trickle down’ effect works in practice or if mandatory gender quotas should be explored in the final shortlist as well.

Another interesting regulation has linked award recognition to diversity training. All eligible films for the Outstanding British Film award now need to comply with Standard C of the BFI diversity standards focusing on training and opportunity. This is an innovative strategy to incentivise film companies to engage proactively with practices which increase diversity, and could create best practice for other awards ceremonies – in the arts and beyond – to follow suit.

So has any of this had any impact since introduced in 2020? Well, nominee lists in 2021 and 2022 have certainly shown a marked change. In 2021 each of the acting categories, four of the six nominees were from ethnic minority backgrounds, and four of the nominated directors were women, while three were also nominated for Best Film not in the English Language. There were still glaring omissions – such as the exclusion of older women, particularly in TV. Such gendered ageism is common in most on-screen media, but made more visible at awards ceremonies and backed up by the research, which shows the average age of BAFTA-nominated leading actresses has plunged from 52 to 32 since 2000.

The 220 new regulations initiated by the review have also been credited with 2022’s more diverse nominees, and indeed winners. Two of the four acting awards went to non-white actors (Will Smith and Ariana DeBose); Disney’s Encanto was recognised, winning Best Animated Film, highlighting Latin American talent on- and off-screen; the first woman ever to be nominated for Best Cinematography happened this year (an in otherwise all-male list), and it is no coincidence that since the new process to find Best Director, the second and third women ever to take home the win came immediately afterwards - Chloe Zhao in 2021 and Jane Campion at the weekend. Although the latter’s inexplicable decision to use her acceptance speech to minimise the racism and sexism which the Williams sisters have battled against to become world-leading sports stars shows us that women winning awards doesn’t end the battle for feminism at the BAFTAS.

There is still a long way to go. Best Actress has still only ever been won by white performers; demonstrating the multiple intersectional barriers facing women of colour in the film and television industry – not only in roles and jobs within the industry, but also in the perception of their performances as worthy of an award. And we have yet to see a ceremony where more than two of the four acting awards are won by Black or minority ethnic performers. To misquote RBG: when will there be ‘enough’ people of colour winning these ‘Big Four’ awards? When there are four.

More generally there remains a troubling lack of representation of women and minoritized individuals working in the film industry, particularly behind the scenes. Less than six per cent of the writers, directors, and producers of US-produced films are Black. Women accounted for just 16% of directors working on the top 100 grossing films in 2020, and just 23% of all directors, writers, executive producers, producers, editors, and cinematographers working on the top 250 films that year. The lack of progress is evident – this is just six per cent more than in 1998. Dr Martha Lauzen from the Center for the Study of Women in Television and Film in San Francisco writes “The stability of the numbers is stunning. After countless panels, repeated calls for voluntary programs, and numerous promises of change, the overall percentage of women working on top-grossing films has barely budged in over two decades.”.

A great deal of work needs to be done to increase these numbers, and greater equality and diversity in awards ceremonies can play a part of this - the shifts we see in diversity on long- and shortlists will certainly, albeit slowly, find their way on to winners lists. Such changes to the BAFTA regulations, though contentious, are sustainable, structural ways to address systemic exclusion. Aiming the cultural spotlight at the numbers also helps, as the scrutiny and subsequent discussion keeps equality and diversity in the awards on the agenda and demonstrates people’s desire to see themselves better represented on and off-screen – and celebrated as a result.