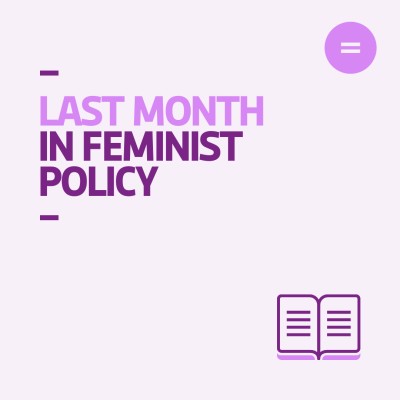 In April we launched our new report, Enough is Enough: Tackling Workplace Sexual Harassment in Scotland. The report sets out the extent and nature of sexual and sexist workplace harassment and the impact it has on women in Scotland and highlights the need to reframe this as an issue of women’s equality that is rooted in sexism and sits within the spectrum of violence against women and girls. The report makes recommendations for action on sexual and sexist harassment in the workplace for Scottish Government and other bodies covering: prevention, reporting, investigation and decision-making, employment tribunals, and regulating sexual harassment. You can read the full report online here.

This report is the result of a 2-year project which included convening an expert group of academics, lawyers, violence against women practitioners and employment law specialists, as well as conducting research and focus groups with women who have experienced harassment. This work is part of a wider project in Scotland with Close the Gap, who are working separately to build capacity in employers. The work was funded by Rosa, as part of a 4-nations project on sexual harassment. We had a chance to share this work and talk about recommendations for action in the Scottish Parliament with MSPs and guests including members of the expert group and sector colleagues. We've also shared some quotes about sexual harassment from our survey and focus group sessions which you can see on Twitter here.

What women need from a Scottish Carer's Assistance survey

Following our recent focus groups with unpaid carers, we've launched a survey to allow you to share your views on the Scottish Government proposals with us, and to help inform Engender's response to the consultation. Women provide more unpaid care and more intensive care than men, and between 60% and 70% of unpaid carers are women. Women are also the majority of carers providing over 35 hours of care per week and women are twice as likely to give up paid work to provide care, rising to four times more likely for ‘sandwich care’.

You can take the survey, which should take around 5-10 minutes to complete, online here. If you have any questions or would like to share your views in a different way, please contact our Head of Development Catriona Kirkpatrick via email at catriona.kirkpatrick@engender.org.uk.

Women's representation in the local elections

Ahead of the Scottish local council elections on 5th May, we're publishing a series of blogs from members of the Equal Representation Coalition exploring the state of equality in our politics at the moment, their work in tackling barriers to participation, and the crucial role that accurate data plays in achieving equal representation in our councils and parliaments and why we need more of it. In this blog, Elena Soper and Rhianna Mallia from YWCA Scotland - The Young Women's Movement look at the importance of ensuring our elected representatives are truly reflective of Scottish society, and their work to empower young women to make their voices heard. Read the blog here.

Following the candidate nomination deadline for the election, a record number of wards have already been declared uncontested. Women5050 have highlighted that of the 18 seats already declared, 78% of these seats have been won by men. It’s concerning but not surprising to see so many uncontested wards these elections. Local politics is still not a viable option for many, including for many women who currently only make up 29% of currently elected local councillors in Scotland. Many elected women councillors are also choosing not to run again, citing issues including the poor remuneration for councillors, online abuse, and difficulties balancing work and family commitments amongst others.

You all know how important we think the Public Sector Equality Duty is, and how much of a difference it could make to gender mainstreaming if done right. Last month, we joined 25 other organisations working for equality and human rights in Scotland, including specialist race, LGBTI and disabled people’s organisations, in calling for a rethink in Scottish Government’s plans for PSED.

The Scottish specific duties of PSED, which is meant to ensure that all public bodies take action to proactively advance equality and eliminate discrimination, has been under review for several years, and we’ve been eagerly awaiting the consultation. Unfortunately though, what is being consulted on reflects very light-touch changes, and a real missed opportunity for substantial reform. In the joint submission, we state that our concerns about the failures of the existing system are not reflected in the current consultation, despite many of us repeatedly raising these with Scottish Government.

You can read more, and access the full submission here, and thanks to CRER for their work in coordinating the submission. We’ll also be producing our own response to the submission in the next few weeks, which we’ll share with you.

Gender bias in political news reporting during the Covid-19 pandemic

Recently, we published the next in a series of blogs from the current student placements Engender is hosting from the University of Strathclyde Applied Gender Studies and Research Methods course. In this blog, Kirsty Rorrison discusses the COVID-19 pandemic, from it's impact on women and minoritised communities to it's representation in the media, and introduces research specifically focusing on how gender bias in political news reporting has operated during the pandemic. Read the blog post here.

Be sure to check out the previous post in this series from Rowan Ledingham, who discusses women's representation in local councils, and will be researching about why some women that were previously elected are not re-standing in the local council elections in May 2022. Read it here.

Countdown to the local council elections on 5th May

It's now less than a week until the local council elections that are taking place next Thursday 5th May. Elected councillors will represent you on your local council, and local councils are responsible for making decisions about how money is spent to provide local public services. For this election you vote using numbers, and your ballot paper will list all the candidates standing to be councillors in your ward. You will be asked to number the candidates in order of your choice using 1, 2, 3 and so on, but you don’t have to number every candidate. You can find out more about the election and how to vote, in this guide from the The Electoral Commission.

In the lead up, we've been publishing a series of blogs from Equal Representation Coalition members, who have been taking a look at the state of equality in our politics at the moment, discussing their work in tackle barriers to participation, and exploring the crucial role that accurate data plays in achieving equal representation in our councils and parliaments and why we need more of it. Last week we published a post from Junaid Ashraf, Community Engagement Officer at CEMVO Scotland, who explores some of the barriers faced by ethnic minority people entering politics, how these contribute to persistent underrepresentation in our councils and parliaments, and why it’s high time for change. Read the latest blog here, as well as previous posts from YWCA Scotland - The Young Women's Movement here, and from our Equal Representation Development Officer, Jessie Duncan, here.

Elect Her have also been sharing some ways to help get your chosen local candidate elected such as canvassing, and leafleting, and phone banking. You can find more information on their website about how to get involved, as well as which candidates are standing in your local area, here.