Belén González Leggire is an Uruguayan journalist with a master's degree in gender studies and public policy. She was born in Montevideo, and is been living in Edinburgh since 2017. The topics she has investigated over the past years have included sexual violence against women during military coups and the design of social care services in Europe and South America. She is a member of WomenBeing, a research network for the promotion of gender studies.

Here, she writes about abortion legislation in Latin America, where women can be sent to prison for illegally terminating a pregnancy or even for suffering a spontaneous miscarriage. 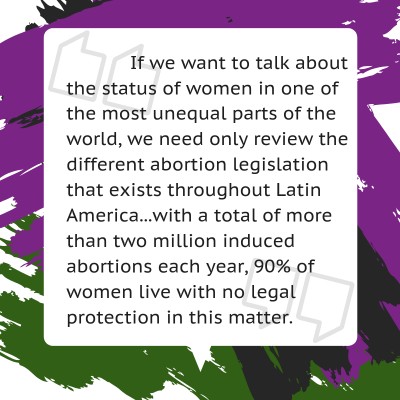 2018 was yet another year with much to think about for the feminist. In May, Ireland finally repealed the Eighth Amendment, a subsection of their 1983 Constitution that gave the equal right to life of the pregnant woman and the fetus. This cruel law has made termination illegal in the country for the last 35 years. Simultaneously, in South America, Argentina had the chance to join the small group of countries in the region which legalise abortion. Unfortunately, this did not happen. And despite the “#EleNão” (#NotHim) campaign - a social media movement of women rallying against inequality and the election of Far Right a presidential candidate - Jair Bolsonaro won the elections in Brazil, resulting in the country giving the far right more power in the region as a whole.

If we want to talk about the status of women in one of the most unequal parts of the world, we need only review the different abortion legislations that exist there. Uruguay, Cuba, Puerto Rico, Guyana and Mexico City have the most progressive legislation: in these cases, terminations are permitted (with parental authorization if needed and a gestational age limit in some cases). However, with a total of more than two million induced abortions each year across the whole of Latin America, 90% of women live with no legal protection in this matter. This results in women being forced to seek illegal and dangerous abortions.

A few years ago, The Guardian reviewed the case of 10-year-old girl in Paraguay who was raped and subsequently became pregnant. The news that, despite the circumstances, this young girl was not able to get an abortion highlighted the problem of abortion legislation in this country, and shocked people across the world. American feminist author and journalist Jessica Valenti asked herself - and many of us did the same - “Who in their right mind would think it reasonable that a 10-year-old child who became pregnant after being raped carry a pregnancy to term?”. Apparently, the country’s health ministers and the rest of their administration thought this was reasonable and so the girl became a very young mother.

Feminist sociologist and psychoanalyst Nancy Chodorow (1978) offers an explanation as to why this barbaric legislation still exists. She claims that motherhood is the last excuse the patriarchy has in terms of perpetuating the sexual division of labour. When we consider the requirements of countries dominated by patriarchal and capitalist systems, the conclusion is the demand for a cheap workforce. That is why capitalism needs us to be mothers, no matter under what circumstances: even if you are a 10-year-old girl raped by your stepfather and pregnant, patriarchy and capitalism need the newborn.

But what patriarchal and capitalist countries fail to consider is that their ignorance has a counter effect on working population figures. According to the UN, 24 million Latin American women of reproductive age have no access to contraceptive methods. As a result, almost 56% of pregnancies are unplanned, forcing hundreds of thousands of women to find a way to terminate their pregnancies; often in the most unsafe ways. It is estimated that annually 760,000 women need medical treatment because of problems brought about by illegal abortion methods. Furthermore, these ‘back alley abortions’ are one of the main causes of a maternal mortality rate of 67 deaths per 100,000 live births. The result is that at least 10% of the maternal mortality ratio in Latin America is accounted to these unsafe practices.

Many women make the life-threatening decision to seek an illegal abortion because there is no alternative in their country. Argentina’s abortion legislation is regressive with exceptions granted only in instances of rape, or whereby termination is necessary in order to preserve the physical health of the woman. Until recently, abortions in Chile were not permitted under any circumstances Now, however, they are willing to make exceptions in cases of rape, foetal anomalies and to save the life of the pregnant woman.

Exceptions within legislation in the remaining countries of Latin America are also minimal, lacking in detail and are often unclear as a result. In Brazil, Panama, Paraguay, Venezuela, Bolivia, Ecuador, Perú, Colombia, Antigua and Barbuda, Guatemala, Dominica, México, Bahamas, Bolivia, Costa Rica, Grenada, Jamaica, St. Kitts and Nevis, St. Lucia, Trinidad and Tobago, Barbados, Belize, St. Vincent and Grenadines, permission for abortion is only granted where it preserves the life of the woman, their physical or mental health, for socio-economic reasons and in cases of rape, incest or fetal anomaly. Realistically, however, the percentage of women who are actually granted access to safe abortion procedures on the basis of these claims, is highly debatable. Furthermore, the fact that a majority of women reporting to be victims of rape and sexual abuse are disbelieved by the system makes this particular exception in the legislation seem laughable. And last but not least, abortion is still illegal - under any circumstances - in Dominican Republic, El Salvador, Haiti, Honduras, Nicaragua, and Suriname.

As a result of the inconsistent abortion legislation across Latin American, women are suffering varying degrees of inequality. In a few countries, a marginal number may be given access to a safe procedure, ending an unplanned pregnancy with all the required guarantees and due care. The biggest majority however, have very few options and are often subject to terrifying outcomes as a result. Many women end up being forced to give birth to a child they are unable or unfit to care for. Many others suffer even more gravely. They face being sent to jail for seeking out an illegal abortion or even suffering a spontaenous miscarriage. Even more tragically, far too many women are dying, either as a result of complications during unwanted childbirth or as they attempt to end their pregnancies the only way they can.

Quoting Chodorow again, motherhood is the last way patriarchy has to maintain the status quo, to keep women in the domestic sphere and perpetuating the gender inequalities that we have been fighting against for decades. With this perspective, it clear why the majority of the states in that region (and basically in the whole world) are not interested in legislating this matter. Because remember woman, under any circumstances, your duty on this earth is to become a mother and feed the system.

And with this last statement I don’t want to sound like I despise motherhood: I don’t, and I don't believe that the ultimate feminist revolution against the patriarchy and capitalism is not having kids at all. I just want every women - and not only in Latin America - to decide whatever they want to be and do, and not be condemned to a life of shame and stigmatization, face jail or even death, or enter into forced motherhood. If a woman wants to be a mother, she should do it under her own circumstances, as a single mother, with a female or a male partner, in a co parenting project. But whatever she decides, she needs a state that legislates in terms of health, care, education, and even in empathy and compassion: I'm done seeing women going through pregnancy (and everything that comes after giving birth) in complete loneliness.