Abortion internationally – how does Scotland measure up?

On the International Day of Safe Abortion, Engender have released our latest report which shows where Scotland sits internationally with regard to abortion rights. Focusing on countries in the western world, we highlight the positive examples of Canada and territories in Australia which have decriminalised abortion, respecting women’s autonomy over their own bodies. 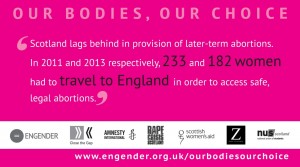 In Scotland, abortion remains part of the criminal justice system, with strict requirements on women seeking to end a pregnancy. Women seeking an abortion beyond 18 weeks, while still within the legal timeframe, must travel to England to receive healthcare.

The report highlights the range of restrictions on women accessing reproductive healthcare around the world, from Finland where approval is required from the National Supervisory Authority for Welfare and Health for abortions beyond 12 weeks, to France where the cost of abortion is only covered for women on low incomes.

“On the International Day for Safe Abortion, we are highlighting the obstacles facing women around the world fighting for control over their own bodies. This includes nations within the United Kingdom itself, and our European neighbours.

“A look around the globe tells us that we are making slow progress towards realising women’s right to safe abortion healthcare. Some countries are lagging far behind, and some are moving in the wrong direction. Others, like Canada, are blazing a trail for Scotland to follow by completely decriminalising abortion.

“The UN has repeatedly challenged the UK Government to act to ensure women in Northern Ireland can safely terminate a pregnancy and it’s shameful that this is not a reality. The UK and Scottish Government’s commitment to fund abortion healthcare for Northern Irish women is to be welcomed, but women should not have to travel hundreds of miles for minor healthcare procedures. We are hopeful that the result of the forthcoming referendum in Ireland will mean that a miscarriage will no longer be a death sentence for those in Irish maternity hospitals, as it was for Salvita Halappanavar, and that women will no longer have to make unnecessary expensive and stressful journeys to end an unwanted or unsustainable pregnancy.”