Guest Post: A Woman’s Place is in the Kitchen (a professional kitchen, that is)

Leonie is a freelance chef and food stylist. Strongly influenced by working under a number of inspiring female head chefs, her career spans television; cookery books; London restaurant work; writing and presenting prominent talks for the V&A and Tate Britain, which showcase irreverent women in food history. Find her at curatedcakes.com or on instagram @Leoniesooke

Once again, this year’s employment figures highlight the inequality within the restaurant industry: data from the Office for National Statistics shows that only 18.5 per cent of Britain’s top chefs are women.[1] It’s an age-old problem. From Renaissance cooks and Victorian culinary masters to the macho celebrity chefs of today, men have taken centre stage on the professional platform.

Yet much has changed in the past few years. In the wake of pioneers such as Alice Waters, Ruth Rogers, Angela Hartnett and Margot Henderson, there’s a rising generation of young women taking the food scene by storm. Just consider Claire Ptak and Lily Vanilla with their pioneering bakeries, Florence Knight heading up the kitchen at Polpo or Kim Woodward at the infamously masculine Savoy Grill (to name but a few). The ‘boys club’ of late has certainly lost much of its cool.

But while the picture is far from bleak, lack of visibility remains a major problem. The boom in food media over the past decade, for all its benefits, has compounded a sizeable image problem. We’re inundated with a singular model of what it looks like to be a chef – one that often revolves around glamorising competitive, aggressive machismo. While Gordon Ramsay’s shouting fits may have left our screens for the brighter lights of American TV, we’re still faced with a vision of male-dominated cuisine: take the final of Great British Menu this year – a vision of testosterone-driven, techy cheffing. 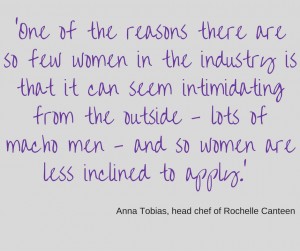 For women it remains relatively hard to find role models, to look up within the restaurant industry and see a template of how things can work without aping masculine models. Anna Tobias is head chef of Rochelle Canteen, where I’ve been lucky enough to work. She puts it this way:

‘one of the reasons there are so few women in the industry is that it can seem intimidating from the outside - lots of macho men - and so women are less inclined to apply. […] I dealt with it by picking and choosing which restaurants I worked in. I only apply to places where I think the atmosphere would be woman friendly.’

Entry into the industry for women is improving, but still over the past three years only one in eight applications for chefs jobs have been female.[2] And the drop off rate is uncomfortably high. We may have increasing examples of passionate, young female chefs, but what happens later on? A second central problem remains: how to build a family friendly kitchen. Jooles O’Sullivan, head chef at The Good Egg, agrees that the perception of professional kitchens can put women off from the start. But she also admits she no idea what her career will look like once she has children. One answer may lie in the sprawling diversity of today’s food industry: if kitchens don’t fit, women are finding ways to carve out a different path with their skills, mould their work to their own needs.

But while this offers many positive and creative opportunities, let’s not resign ourselves to having fewer women in the kitchen. It’s time we started to celebrate a more diverse model of what it looks like to be a chef in 2016. Forget high-octane male kitchens (full of ego and shiny technical equipment). Or the media’s vision of women in food (mainly clean-eating gurus with identikit gloss and glow). There are many more inspiring versions of working in food that serve women much better. Because after all, the industry has much potential: while service hours might be tied to customer need, the work structure (if managed with proper organisation) has the potential to be pliable. As Anna says: 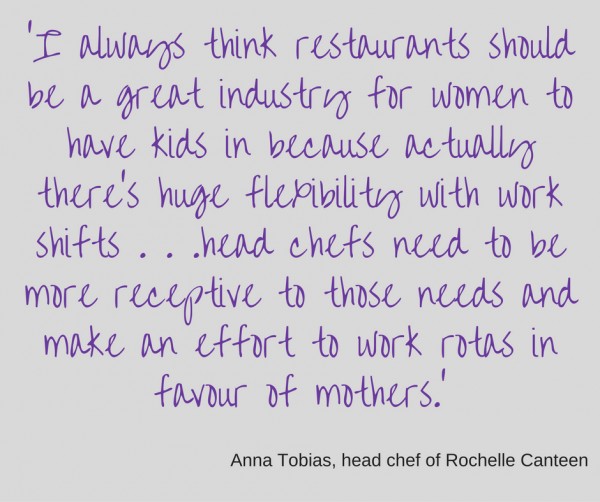 Anna is emblematic of a modern generation of women chefs. Cool, collected and creative – she shows exactly how it can be done right. She runs a restaurant kitchen that stands out: distinct style, strong values and instinctive food. With women at the helm. It leaves you wondering why there aren’t more like it around. But as she so rightly points out, the problem is certainly not all ours: men need to be part of this debate. ‘What's their perspective on why women aren't in kitchens? How do they think things could/should change?’, she asks. Because without an inclusive dialogue, there’s little chance of meaningful change.

It’s time we changed the face of cheffing and presented a far more female friendly reality. Long hours, heat and high pressure are undoubtedly part of the course in the restaurant world. But there’s huge room for fulfilment too, if we foster the right spaces. Let’s celebrate the many creative women who forge a successful space and raise awareness of what a satisfying job it can be. Because, as Jooles says: ‘I can honestly say I’ve had some of the best times in my life working in the kitchen environment, so many life skills are learnt here.’

Want to blog for Engender? Find out more here.