A referendum in Northern Ireland isn’t the answer to free, safe and legal abortion 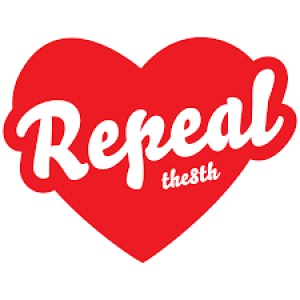 The images of the Yes campaign in Ireland are still imprinted in my mind: pictures of women campaigning under banners of “Together for Yes”; the bold white “REPEAL” letters on black jumpers; the red heart emblazoned with “Repeal the 8th”; and #hometovote. It was only last week that the Yes campaign won, but it already feels like an age. Almost as soon as the last constituency results were announced, our collective gaze shifted north to focus on the punitive, regressive law that remains in place in Northern Ireland. While mainstream attention to the abortion law in Northern Ireland is long overdue, confusion has set in over how women’s reproductive rights can be realised in Northern Ireland.

It’s difficult to pin down the exact moment a referendum in Northern Ireland was suggested, but it continues to gain traction. Three days ago, Maria Miller MP, posted a tweet stating that the people of Northern Ireland “deserved” a referendum to have their voices heard. Since the tweet, the statement has been quoted in the Sun, the BBC, the Mirror, the Financial Times and Politico, to name a few.

It’s easy to get swept up in the excitement of last Saturday’s Irish referendum result, and to think to ourselves that what worked in Ireland can surely work in Northern Ireland also. Like others, we want the rights that will soon be accorded to women in Ireland to be extended to Northern Irish women too. But we need to take a step back and appreciate that Northern Ireland is different than Ireland. It doesn’t need a referendum to realise women’s reproductive rights, and the suggestion that it does detracts from efforts to bring about free, legal and safe abortions in Northern Ireland.

The decision to hold a referendum in Ireland wasn’t on the grounds that people needed their voices heard. It was done because the eighth amendment is found in the Irish constitution. Ireland required a referendum to repeal the eighth because it was the only vehicle available to bring about change. Amending the Irish constitution can only happen by way of a referendum. There’s no way of getting around that. So in order to give the Irish Parliament the power to enshrine women’s reproductive rights in law, they had to go to the people. In Northern Ireland, the situation is entirely different. Restrictions on women’s access to abortion is in law, not in a constitution.

That seems to be one of the key differences not being grasped right now: the difference between the law in Northern Ireland and the constitution in Ireland. Because a constitution is the supreme law of the land, its framework is purposely difficult to amend, hence Ireland’s need for a popular vote to repeal the eight amendment. In contrast to a constitution, laws are set out in statutes. That’s not to say that they’re easy to amend, but they’re not as fortified as a constitution. We elect parliamentarians to the institutions where laws are created, amended and repealed, and by voting, we give our elected representative the power to do so on our behalf. That’s why we don’t hold a referendum every time our laws are up for debate. 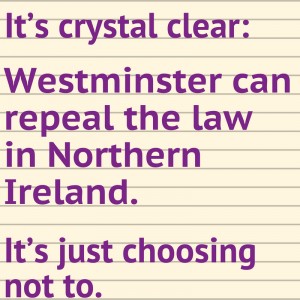 We’ve just witnessed a remarkable moment in grassroots feminist action. We should be elated that Irish women’s decades-long campaign will provide future generations of women with access to free, safe and legal abortions at home in Ireland. But we shouldn’t forget that a more “compassionate” Ireland was achieved, at least in part, by the women who shared their personal accounts of the eighth amendment. Women came forward to tell their stories to convey to Ireland the devastating impact of the eighth amendment, and by doing so they made sure that women after them wouldn’t have the same stories to tell. Given the cost of the Irish referendum – the time, the emotional labour, the energy, and the money – why would we subject women in Northern Ireland to the same when we don’t have to?

Women’s reproductive rights in Northern Ireland aren’t up for decision by popular vote. They’re inherent rights that continue to be violated by government inaction. That isn’t just our opinion. The United Nations found the abortion law in Northern Ireland to be a breach of human rights and called for the decriminalisation of abortion. That call was ignored by those who wield power. The people of Northern Ireland don’t “deserve” a referendum. They deserve a UK Parliament that takes decisive action to protect women from human rights violations.

We've written more on why Scottish MPs must take action for women in Northern Ireland when international obligations are breached here.