Guest Post: A letter to women of the UK from your European sister 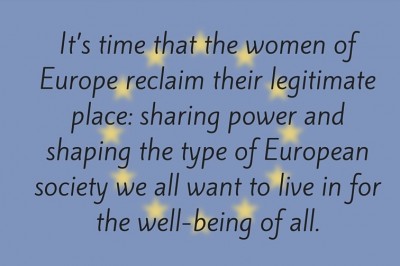 Dear Sisters of the United Kingdom

As D Day approaches, I appeal to you to vote YES to REMAIN in the European Union (EU).

The EU, with all its flaws, has been instrumental for women’s rights and gender equality since the treaty of Rome in 1957. From a very narrow focus on equal pay – which I concede has yet to be achieved – the feminists of Europe have successfully pushed the boundaries to ensure that all policies are designed and implemented through a gender lens (gender mainstreaming). And yes, I concede again that the gender revolution has yet to take place.

We need you to continue the unfinished business, to move beyond the rhetoric and translate words into actions. We can’t do this without you. Because whether we are in Croatia, Hungary, Denmark, Portugal or the UK, our common enemy is not the EU but patriarchy, in which the EU is deeply embedded.

The power of sisterhood across nations has the potential to reverse the trend to privatise our public services, to challenge and stand up against sexism, racism and populism, rising inequalities within and between nations and between women and men.

Think of it, our laws – your laws – on equality between women and men in the labour-market, access to training, maternity leave, parental leave, equal pay, prohibition of discrimination in insurance policies, access to cross border health services, and perhaps one day, equal representation of women in all decision-making posts across the academic, financial, economic and political spectrum – all come from Europe. You may say that these would have been put in place sooner or later, but the EU was a pioneer in accelerating the speed of change.

Dear Sisters of the United Kingdom, you are – as is the case for all women in Europe – half of the population not a majority minority. We all come from different backgrounds, social class, ethnic origin, migration history, age dis/ability, sexual identities, ideologies but we have one thing in common: we are all subsumed in a patriarchal system that is dictating our lives. It’s time that the women of Europe reclaim their legitimate place: sharing power and shaping the type of European society we all want to live in for the well-being of all.

It’s not such a long time ago that the suffragettes fought - and won- in harsh and violent conditions, the right for women to vote. Do them proud on 23 June, vote YES to REMAIN in the EU. We need you to continue their and our common cause: equal rights for women in Europe.

Together we will be stronger.

Read our briefing about the EU and gender equality here.

We have also asked the Vote Leave campaign if they would like to contribute a blog.