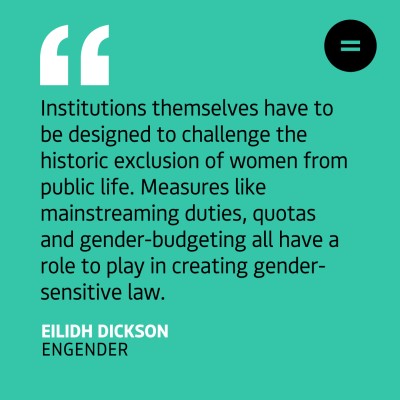 At the last Scottish Election in 2021, we were delighted to see that 45% of MSPs elected to the parliament were women. Credit has to be given to women party activists and candidates, civil society campaigns such as Women 50:50 and our own Equal Representation project, but also to parties who listened and introduced measures to ensure the selection of women candidates in winnable positions.

We frequently say that equal representation is not just the goal for its own sake, but that the real value for women’s equality is when that more equal representation leads to change for all women. Women parliamentarians have to be in all the spaces where decisions are made. Work to raise gendered impacts of policy has to be distributed equally, not left to a small number of lone voices. Institutions themselves have to be designed to challenge the historic exclusion of women from public life, and measures like mainstreaming duties, quotas and gender-budgeting all have a role to play in creating gender-sensitive law.

Recognising this, Engender has been advocating for a project to look at how women’s equality is operationalized in the Scottish parliament for a long time, building on the work of our Sex and Power reports to interrogate those headline statistics further. Our gender edits explore where women's equality appears - even just at a surface level - in policies and budgets, and we regularly highlight the dangers of producing ungendered policy (for example our work on the Covid-19 inquiry)

In December 2018 I was invited to join a women parliamentarians meeting as the British Islands and Mediterranean Region (BIMR) Commonwealth Women Parliamentarians (CWP) Steering Committee to talk about how the Scottish Parliament about gender-sensitive parliaments and how the Scottish Parliament could do more. Having consistently encouraged parliament to make women's equality a focus, we were delighted that when she was appointed as Presiding Officer, Alison Johnstone MSP made it immediately clear that her priorities included ensuring that parliament was more representative.

Today's announcement that the Presiding Officer is to lead a Gender Audit of the Scottish Parliament has the potential make proposals that will make a meaningful difference to the way national law and policy is made by our Parliament.

A gender audit is an opportunity to bring together internal and external voices to look at not only how women get access to decision-making, but how the Parliament itself supports them and their colleagues to make law that benefits all of us. This will mean looking at intersectional issues – a challenge to all of us given that it took until 2021 for women of colour to be elected to the Scottish Parliament.

We at Engender are excited to be asked to join the Audit Group, which will be chaired by the Scottish Parliament and also involve Scottish Parliament Staff, a cross-party group of MSPs and an academic advisory panel, including Fiona Mackay, Meryl Kenny and Sarah Childs, the latter of which worked with a similar project at Westminster (the Good Parliament Project). We look forward to participating in the vital project to push for changes that will cement the progress we welcomed at the 2021 election.

What is a gender-sensitive parliament?

A gender-sensitive parliament is described by the Interparliamentary Union (IPU) as an institution that is founded on gender equality, where women and men have an equal right to participate without discrimination or recrimination. A self-assessment toolkit has been developed by the IPU to support national or subnational parliaments to assess how well their processes are working for women, inside and outside of the institution. Since then EIGE has produced a simple framework for examining how parliaments might be gender-sensitive: