The anticipation is over. Last week, the Scottish Government tabled its social security legislation. Below, our policy manager Emma Trottier gives you a quick rundown of what’s what in the Social Security (Scotland) Bill.

What is the Social Security (Scotland) Bill?

The Scottish Government has called the Bill ‘enabling legislation’, which means the objective of the Bill is to the set the foundation for the social security system in Scotland. 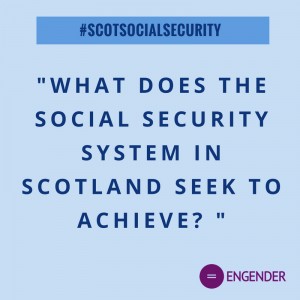 The first thing you’ll see in the Bill are the principles. The principles, outlined here, will guide the new social security system:

These are laudable principles, but absent from the Bill is an answer to the question: what does the social security system in Scotland seek to achieve? The purpose of any social security system is to reduce inequalities. Social assistance seeks to build a more equal society by giving people the means to live a safe, fulfilling and dignified life. In reality, it predominantly supports women. Why? Because factors like low-paid work, caring responsibilities and violence against women result in women being twice as dependent on social security as men.

In addition to outlining principles, the Bill also commits to developing a charter. The purpose of the charter would be to let people know what can be expected from the social security system in Scotland. The plan is to draft the charter in consultation with people who receive social security. We’ll keep you updated as plans for the charter progress.

What does the Bill say about the day-to-day operations of the social security system?

The Bill is pretty high-level, but there is some information about process. For example, the Bill outlines the application process (which the Bill refers to as ‘determination’ ) and also the processes for: 1) reconsidering an application (which the Bill refers to as ‘redetermination’ ); and 2) appealing decisions made by the Scottish Government (e.g., the First-tier tribunal). If you’re looking for more specific details, like in what timeframe the Scottish Government will make a decision on your application for social security, you’ll be disappointed. The Bill doesn’t include information on elements like timescales.

How did Scotland get powers over these social security programs?

We need to go back a few years to answer to this question.

The devolution of these and other powers happened in 2016 by virtue of the Scotland Act 2016. This piece of legislation gave Scotland power over certain social security programs. A list of the programs that are devolved to the Scottish Parliament and reserved to Westminster can be found here.

What about split payments of Universal Credit?

You might remember that we, along with other equalities organisations, called on the Scottish Government to introduce automatic individual payments of Universal Credit, with entitlements relating to children allocated to the main carer and elements for disability, unpaid carers and housing dispersed accordingly. 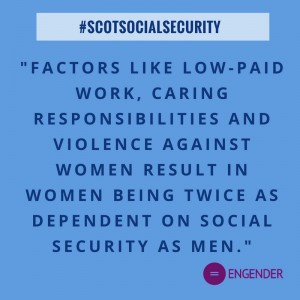 We are still calling for automatic split payments of Universal Credit. One payment to one partner in a couple is likely to result in less equal relationships, with one individual less able to access income. While relevant to both sexes, it is especially relevant to women. In broad terms, it is a matter of principle that everyone should have access to an independent income.

The Bill doesn’t make any provisions around the three Universal Credit flexibilities. As a quick refresher, the Scotland Act (2016) gave Scotland the power to make regulations concerning:

Since the Scotland Act (2016) already provides power to make regulations over the Universal Credit flexibilities, there isn’t a need to refer to these three flexibilities in the Social Security (Scotland) Bill. As such, the Bill doesn’t speak to split payments of Universal Credit.

That said, the door isn’t closed on split payments. In their policy memorandum, which was introduced alongside the Social Security (Scotland) Bill, the Scottish Government explains that ‘Further discussions and policy development will be taken forward with stakeholders on flexibility to split payments between members of a household’. 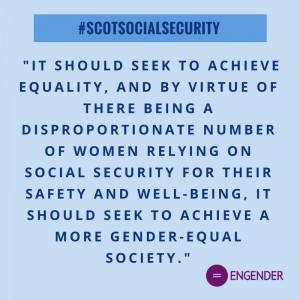 First things first, our aim here is to provide some quick facts about the Social Security (Scotland) Bill, but this isn’t the end. Over the last few days, we’ve been analysing the Bill, reviewing our recommendations for the Scottish social security system, and poring over the Scottish Government’s analysis of responses to its consultation on social security. Once our analysis is ready, it’ll provide greater detail on the Bill and on our thoughts about what’s being proposed. Stay tuned.

Over the next few months, we’ll be working with the Scottish Government and the Scottish Parliament to ensure that the proposals in the Bill respond to the concerns women have with the existing social security system. We have such a unique experience in Scotland – to build a social security system from the ground up. Let’s make sure we do it right.
Posted on June 27 2017 at 15:56