This week, we've released a special edition of #FridayFeministFive focusing on our campaign calling on the UK Government to scrap the abhorrent ‘family cap’ and ‘rape clause’. Here we list 5 simple things you can do to help. 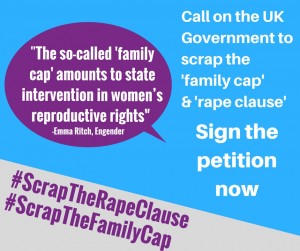 We, along with Scottish Women’s Aid and Rape Crisis Scotland, have submitted a petition to the UK Parliament petitions committee. The ‘family cap’ and ‘rape clause’ hasn’t been debated in the UK Parliament (despite being raised 25 times by Alison Thewliss MP) and this petition is one of the best ways we can help secure a debate. For that to happen we need 100,000 people to sign it. This is no mean feat, so as well as signing the petition, we’ve set out some other ways you can help us spread the word. Sign the petition here.

Please share the petition far and wide, on social media like Facebook and Twitter, but also by asking friends, family and colleagues directly. We know there are always hundreds of petitions out there, so we want you to ask 5 people personally to sign this one. A text, email or a chat in person means it’s much more likely someone will take action on an issue than just seeing it in their news feed. This is a UK-wide issue that will affect not just women and children in Scotland but also families in Northern Ireland, Wales and England, so spreading the word is essential.

Please contact your MP, MSP and local Councillors (and candidates!) and ask them to sign and share the petition. Not only does that help us spread the word further, but it allows us to see who’s supporting our call to scrap the ‘family cap’ and ‘rape clause’.

You can contact your elected reps in lots of ways. If you already use social media the simplest thing is just to tweet them or to post the request on their wall, but you can find more traditional ways to contact them here.

We’ve created a Twibbon (a graphic overlay for your profile picture on Facebook or Twitter) so you can show your opposition to the ‘family cap’ and ‘rape clause’. Get it here!

5) Stay informed, and educate others

There’s been loads of excellent writing on the rape clause from journalists, commentators and, of course, the women’s sector. Check out some of the best below, and share them with others.

We’ll be keeping our members updated via Friday Feminist Five and on our social media channels. We also have an occasional mailing list for folk interested in staying updated on our work on social security which you can sign up for here.