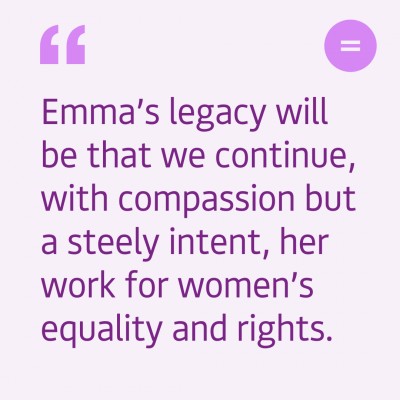 We’ve been overwhelmed, and so touched, at the tributes which have been left for our Executive Director, Emma Ritch.

From the Turkish Women’s Lobby who worked with Emma on protecting the Istanbul Convention, to people who attended Rape Crisis Scotland volunteer training with her many years ago, it’s clear that Emma’s impact on feminism went far beyond her (incredible) feminist policy work with Engender.

We're relieved that Emma’s wit, her love for stationery, and her strategically deployed eyebrows also didn’t go unmentioned in people’s messages of condolence.

But by far the clearest message throughout the tributes left for Emma, though, was the need to continue her legacy. Emma was an inspirational woman, but she would be the first to say she was just one small part of a broad movement for change. Everything she did, she did standing on the shoulders of our feminist mothers, aunts, and big sisters.

Many people have been in contact asking about memorial services, commemorative awards, and other ways to honour Emma’s memory, and the Engender board will be discussing these with Emma’s family in the coming months. For now, though, Emma’s legacy will be that we continue, with compassion but a steely intent, her work for women’s equality and rights.

There is still so much to do. The commitment to incorporate CEDAW into Scots Law, surely one of Emma’s greatest achievements, needs to be seen through. Supporting intersectional feminism in Scotland, to ensure that no woman is left behind. And the vital work of gender mainstreaming, of making sure that Equality Impact Assessments have teeth, and the constant fight for good data gathering.

But one of Emma’s last acts at Engender was to speak to journalist Karin Goodwin at the Ferret about the future of democracy in Scotland, and we thought it was fitting to end on Emma’s own words:

"Advocates for women’s equality have to be optimists.

Complacency is one of the biggest things standing in the way, but we know that there is huge appetite for doing things differently among the women of Scotland. Change takes time, but movements like Me Too, Black Lives Matter, and Say her Name, are chipping away at the pillars propping up our unequal society.”

We will continue the fight for justice in honour of, and spurred on by memories of, our brilliant Executive Director Emma Ritch.

Engender's staff team and Board of Directors

Emma’s tribute page will remain open for people to leave their memories and words of condolence, and you can share yours here: engender.org.uk/rememberingemma

If you would like to leave a donation in Emma's memory, details of the two charities chosen by Emma's family are:

Donations can be made via the donations page on the GWL online shop. People will be able to donate via PayPal, and Emma can be named in the 'order notes' field.

Donations can be made in memory of Emma online, by phone or by post. Full details are here.