As the 'rape clause' and 'family cap' continue to hit the headlines, we've produced a brief rundown of just what exactly is going on.

What is the ‘rape clause’? 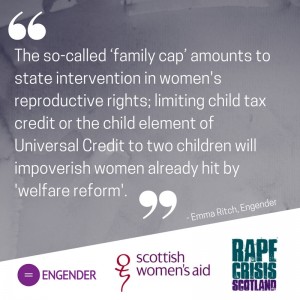 In order to understand the so-called ‘rape clause’, first you need to know about the ‘family cap’. This is part of UK Government changes to social security (known as ‘welfare reform’ ) that limits child benefit and child tax credits to the first two children in a household. Families will not receive child tax credits or the child element of Universal Credit payments for third or subsequent children.

This policy was announced in the budget in 2015 and was roundly criticised by women’s organisations who rightly pointed out that it amounts to state intrusion into women’s reproductive decisions. ‘Family cap’ policies also adversely affect poorer women, and particularly women from communities who traditionally have larger families. This includes refugee women and women from some faiths.

In order to provide some political cover for the policy, and without consulting with women’s equality experts, the UK Government buried in the budget the detail that they would include a ‘rape exception’. This means that women could claim child tax credits and Universal Credit payments for third and subsequent children if they were conceived as a result of rape.

How did the 'rape clause' come into law? 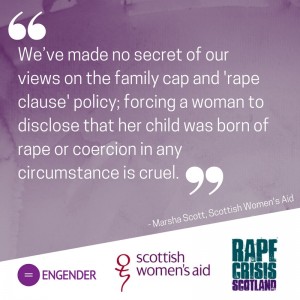 Despite the fact that Scottish MP Alison Thewliss has raised the issue in the House of Commons 25 times, the ‘rape clause’ hasn’t been debated by the UK Parliament. Instead, the UK Government used a process called secondary legislation that bypasses scrutiny in the House of Commons and House of Lords. This means that there hasn’t been an opportunity for Members of Parliament to debate the policy and ask the Government to explain how the policy is compatible with women’s equality and rights.

The only scrutiny that took place before the ‘rape clause’ become law was in the form of a short public consultation by the Department for Work and Pensions, after which pregnancies that began during periods of coercive control, as defined by the law in England & Wales, were added to the exemption. The ‘rape clause’ was reviewed by a UK Lords Committee after it became law, and they noted that the time period for consultation was probably too short. The consultation was only open for a month; which Engender and other organisations said was far too short a time to hear expert views on the proposals for a ‘rape clause’ and its interrelationship with other cuts to social security (read our response here).

Why is the 'rape clause' problematic? 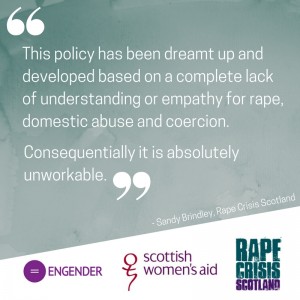 In addition to the opaque way that the legislation is being pushed through, the ‘rape clause’ is fundamentally damaging for women – forcing them to disclose rape and abuse at a time and in a manner not of their choosing, at pain of financial penalty. By providing the exemption for children conceived as a result of rape, and where a second pregnancy results in more than one child, the UK Government is also able to defend the ‘family cap’ as a policy choice, when in reality it is predicated on the notion that women in poverty who have three or more children are irresponsible and feckless.

In addition to the trauma of coerced disclosure, the policy may also place women in danger. Because of a complicated interaction between the way that Universal Credit is paid to households in England & Wales and the law about profiting from crime, the exception for coercive control is only applicable if the woman no longer lives with the perpetrator. As Scottish Women’s Aid states and a huge body of evidence supports, women are most at risk of being murdered when leaving perpetrators of domestic abuse.

In practical terms, the ‘rape clause’ is also unworkable. Belatedly recognising that responding to rape disclosures requires skill, the implementation of the ‘rape clause’ is reliant on third party practitioners to verify to the Department of Work and Pensions that a child has been conceived as a result of rape or coercive control. The law is due to come into effect on April 6th, and yet there are no third party referrers confirmed in Scotland at all. Both Scottish Women’s Aid and Rape Crisis Scotland have refused to act as third party referrers. The House of Lords Secondary Legislation Policy Committee which looked at the legislation has stated that they believe the policy to be unworkable.

Why have violence against women organisations refused to be third party referrers in Scotland? 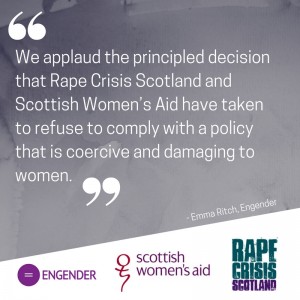 Scottish Women’s Aid and Rape Crisis Scotland have condemned both the ‘family cap’ and the ‘rape clause’, and are refusing to act as third party referrers (although local women’s aid and rape crisis groups are autonomous and may decide for themselves).

They say that to collude with the policy would fundamentally change the relationship between the organisations and the women they are working to support.

They also highlight the re-traumatising affect that the policy will have, and potential implications it will have on the stigma which already surrounds reporting of rape and coercive control, with Marsha Scott the CEO of Scottish Women’s Aid calling the policy ethically unjustifiable.

Both the ‘family cap’ and ‘rape clause’ are still being actively challenged in Westminster. In a joint letter to the Secondary Legislation Scrutiny Committee of the House of Lords, Engender, Scottish Women’s Aid and Rape Crisis Scotland urged the Committee to take a look at the ‘family cap’ and ‘rape clause’. The Committee has since met and considered the legislation, issuing a report which you can read here. The Committee has used the full extent of its powers to draw the legislation to the special attention of the House of Lords, and also intends to write to the Minister about questions raised surrounding the legislation, including seeking clarification on 'whether the exception relating to non-consensual conception can ever be made to work.'

There are also two Early Day Motions in Westminster at the moment trying to challenge the ‘rape clause’. You can see if your MP has signed here and here.

If efforts to prevent the implementation of the ‘family cap’ and ‘rape clause’ across the whole of the UK are unsuccessful, there may still be ways that the Scottish Government can mitigate the effects of these harmful policies.

One thing we know for certain is that the principled refusal from Scottish Women’s Aid and Rape Crisis Scotland to collude with the UK Government’s policies has made it very difficult for the abhorrent ‘rape clause’ to be enacted in Scotland, and with it ensured that the case for the ‘family cap’ is very difficult to make.

Watch this space for what comes next.