CEDAW: How the UN Women’s Bill of Rights creates possibilities for women and girls in Scotland.

Engender members and other people who stay in touch with our work will know that we have been enabling organisations that care about women’s and girls’ equality to shadow the UN CEDAW process. The International Bill of Rights for Women is a key global human rights instrument for gender equality. The UK Government has just been examined by its dedicated UN CEDAW Committee to see how well the rights it provides for are being realised across the four nations of the UK.

We’ve written about the process, what happened during the examination, and annotated the concluding observations (or recommendations) that the Committee makes to UK Government. Here we’re going to summarise four of our reflections from the experience of working on CEDAW over the past two years.

The lack of a UK-wide women’s equality and rights organisation, coupled with a busy UN Committee that has limited bandwidth for parsing our convoluted devolution settlement means that it’s vital for feminist organisations to collaborate on CEDAW. Historically, a lack of dedicated funding, fragile relationships, power dynamics, and competing priorities has made this all but impossible.

In this cycle, Equality and Human Rights Commission funding and a shared commitment to four-nations work developed through the UK Joint Committee on Women meant that we had laid a better foundation for a truly collaborative process. Although we never completely resolved tensions about prioritisation, space, and whether we should target UK Government or devolved administrations on specific issues we did produce a four-nations report that was widely supported. The UN places great weight on civil society coalitions, so working together ensured a greater prominence for our shared calls. We also value the relationships and trust that we are building with feminist organisations across the UK.

One step forward and two steps back on devolution

Despite a civil society commitment to making visible the differences across and between the four nations - including where power lies to make legislative and policy change - the concluding observations seemed to pay less attention to our calls for Scotland-specific recommendations than in previous cycles.

We don’t think that this was because of a failure in our advocacy efforts, but because the question of N. Ireland’s lack of government and consequent failure of women’s and girls’ rights to be realised was (reasonably) considered so much more pressing by the Committee than other devolution-related considerations.

The CEDAW Committee has developed increasingly prescriptive ways of engaging with civil society organisations, in part because the UK delegations have been so shambolic. With civil society organisations unable to reallocate time among ourselves, choose our speaking order, or adequately co-ordinate who might answer questions from the Committee there are now serious questions to answer about the value of participation. We were able to attend meetings in Geneva thanks to funding from the Equality and Human Rights Commission, but it may otherwise have been prohibitively expensive.

We will be advocating for the implementation of CEDAW concluding observations to a relatively receptive Scottish Government and Scottish Parliament, but the cumulative effect of process challenges means that they are less sharply focused than they might otherwise have been. 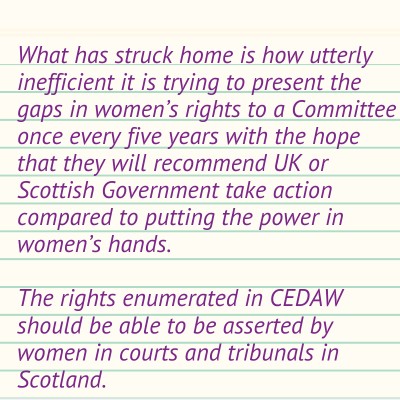 Incorporation would be better

There were lots of heartening things about the CEDAW process, including the huge response Engender got to its call for evidence. We were pleased to hear from so many women’s, equalities, human rights, and more generalist organisations on priorities for action on girls’ and women’s rights. We hope we summarised those effectively in our Scotland-specific shadow report, and thank our CEDAW advisory group for their work in overseeing this process.

What has struck home, though, is how utterly inefficient it is trying to present the gaps in women’s rights to a Committee once every five years with the hope that they will recommend UK or Scottish Government take action compared to putting the power in women’s hands. The rights enumerated in CEDAW should be able to be asserted by women in courts and tribunals in Scotland, and so we continue to support CEDAW’s incorporation into Scots Law. Excitingly, this was also the recommendation of the First Minister’s Advisory Group on Human Rights Leadership. We’ll continue to work towards that goal.