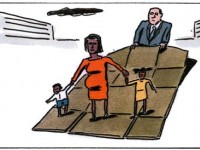 Since 2010, £26 billion worth of cuts have been made to benefits, tax credits, pay and pensions. 85% of this has fallen on women’s incomes.

Last year we published a joint report on the gender inequalities that explain this and the impacts of welfare reform on women in Scotland. Since then, more reforms have been implemented, with devastating impacts on women and children, and more cuts have been announced. Powers over welfare have also been promised to the Scottish Government, presenting certain opportunities to create a better system for women.

Together with Close the Gap, Scottish Council for Voluntary Organisations, Scottish Refugee Council and Scottish Women’s Aid, we are publishing an updated report that sets out these changes, the increasing evidence base and gendered courses for action the Scottish Government could choose to take.

Please join us at the Scottish Parliament to discuss the findings and ways to achieve the changes we want to see for women. We will also hear from women who have experienced welfare reform over the last year.

The event will coincide with Welfare Reform Committee’s Inquiry on Women and Welfare Reform, and will be co-chaired by Michael McMahon (Convenor and Labour MSP for Uddingston and Bellshill) and Clare Adamson (SNP MSP for Central Scotland).