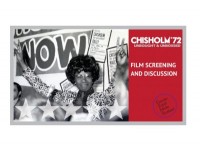 In 1972, Shirley Chisholm became the first African-American candidate for a major party's nomination for President of the United States, and the first woman to run for the Democratic Party's presidential nomination. Now almost 50 years later as we witness another US presidential election between two white men, here in Scotland we have still never seen a woman of colour elected to Holyrood.

Join Gender Equal Media Scotland for a free film screening of the documentary Chisholm '72, followed by a discussion of the media representations of women of colour involved in politics with speakers:

Free and open to all. The film will have subtitles, and if there's anything we can do to make it easier for you to attend, for example by providing BSL interpretation, please let us know by emailing info@engender.org.uk.

If you've already seen the film, feel free to just join us from 7.30 for the discussion!