You are here:Home»Events»Past events»Take One Action Film Festival with Engender 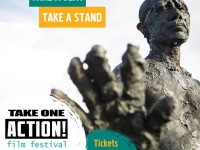 This autumn, we're delighted to be partnering with Take One Action Film Festival to bring you films which explore feminism, sisterhood, and women's representation. We'll be involved in screening three films in Glasgow and Edinburgh throughout the duration of the festival, and there will be screenings later in the year in Aberdeen and Inverness as well. After each screening there will be a discussion with amazing women making change in Scotland and globally, as well as time to for informal chats at the venues after.

The three films are:

The Feminister (19th September, Filmhouse, Edinburgh & 20th September, CCA, Glasgow) a portrait of Swedish politician Margot Wallström which was shot over her first four years in office as Sweden’s Minister for Foreign Affairs;

You can book tickets for all three films in either Glasgow or Edinburgh and see the full festival programme online here.

We really enjoyed picking the films, which we think will make for some really interesting discussions about access to justice worldwide, the universal struggles of balancing career and care, and whether foreign policy can ever be truly feminist. You can find out more about each of the films over on our blog here, and if you're interested in blogging for us about any of the themes discussed in these films, or reviewing the films, please get in touch with us at media@engender.org.uk