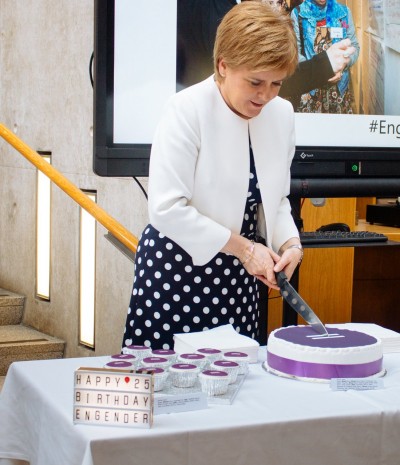 2018 marks Engender's 25th year and to celebrate we're embarking on a project to chart the history of the organisation, and the wider women's movement in Scotland, over the past quarter of a century.

We want to tell the story of Engender and the women’s movement in Scotland over the past 25 years. We’ll be doing this through a documentary podcast featuring interviews with women across Scotland, and by producing a series of photographs of women we should celebrate.

And we need your help to tell us who should feature!

Tell us about the individuals, groups and organisations that have shaped the fight for women’s equality over the past quarter of a century. You may want to celebrate a campaign win, or high-profile advocate for equality, or you might want to remember a community group which no longer exists, or simply highlight the all-too-often unnoticed efforts and contributions of those that keep the fight going.

Don’t worry – nominating someone doesn’t mean they have to be involved in the project, feature on the podcast or have their photo taken if they don’t want to!

Submit your nomination below:

(If the survey doesn't appear below on your device, you can access it here.)

This project was funded by the Sharing Heritage Fund from the Heritage Lottery Fund.